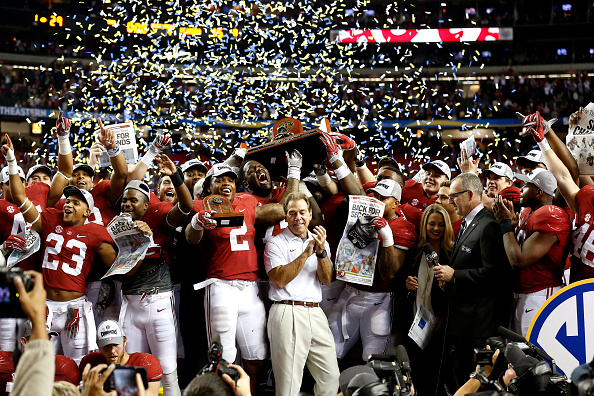 If you were one of the few (OK, many) College Football Playoff fans rooting for chaos on Saturday, sorry, you didn’t get your wish. There will be no surprise entrant this year. No Ohio State getting in the back door for the second year in a row. No Notre Dame sneaking via a mathematical formula. No Iowa getting in and throwing things off-kilter.

And you know what? Good. Because it gives us something that we should’ve gotten last year: A chance at Alabama in the final.

Saw what you want — we’re rooting for Alabama, we hate Michigan State, the Big Ten etc. — but there is little denying that getting a chance to get the Crimson Tide into the National Championship game opposite either Oklahoma, or a potentially undefeated Clemson team, is the game that we all are going to watch. They are the Yankees in the World Series, the Lakers in the NBA finals, the Patriots in the Super Bowl, Duke in the Final Four. You’re going to tune in whether you root for or against them.

You’ll have a stake in the game.

Alabama basically jacks the ratings up just by taking the field. Don’t believe us? The SEC Championship victory over Florida — that was an otherwise ho-hum game — on CBS on a Saturday afternoon was the highest-rated college game of the season, doing an average rating of 8.3 and a 17 share.

Last season, Alabama was the top-ranked team heading into the final week of the rankings and when the playoffs were announced, it was again, No. 1. The matchup everyone was hoping to see was the Crimson Tide against reigning Heisman Trophy winner, Jameis Winston and Florida State. Instead, Mississippi State losing allowed Ohio State to move from sixth in the rankings to fourth, leapfrogging TCU.

All of a sudden, Alabama had to play a rising Ohio State team.

It lost, Florida State lost and while the first playoff national championship was a success, it lost some steam in buildup of a Ohio State-Oregon final. This year, the circumstances worked out perfectly for the selection committee.

Predicted field: 1. Clemson 2. Bama 3. MSU 4. OU. Spartans resume stronger than Sooners. Committee shakes it up if only for something to do.

Both semifinal games are equally compelling matchups, despite not having an Ohio State, Notre Dame or Florida State — another national program — in the final four as an anchor. That’s fine. The powers-that-be know you’re going to tune in on New Year’s Eve to watch the two semifinal games — really, what else is there to do on America’s most overrated holiday? — we’ll all be looking ahead to see if Alabama can make it to the national championship on Jan. 11 in Glendale, Ariz.

This is not to suggest that the Crimson Tide have a cakewalk past Michigan State into the national title. Far from it. This is a Spartans team that won at Michigan and at Ohio State. Sparty beat Oregon earlier in the year then undefeated Iowa in the Big Ten title game. It’s a team that’s only loss was at Nebraska by a point. Even with a banged-up Connor Cook at quarterback, Mark Dantonio’s team has the perfect combination of offensive and defensive ability to put alongside big-game experience and potentially counteract Alabama.

Though who are we kidding? If you’re an Alabama fan, you’re already tuned in, and if you’re not, you’re going to be tuned in to see if the Crimson Tide lose in the semifinal like they did to a Big Ten team last year.

If they make it to the national championship for the fourth time in Nick Saban’s tenure, you’re going to be tuned in to see if they can get pushed over by Clemson or Oklahoma. With all due respect (already given) to Michigan State, Alabama facing off against Dabo Swinney’s undefeated Clemson team for the national title, or Bob Stoops’ Oklahoma squad will break viewing records.

No matter which team makes the finals from Clemson and Oklahoma—the last undefeated team or the storied Sooners program— the playoff committee will be happy. Now it’s the matter of getting the Crimson Tide to do what they couldn’t last year: win and get in. Either way, we’ll all be watching.