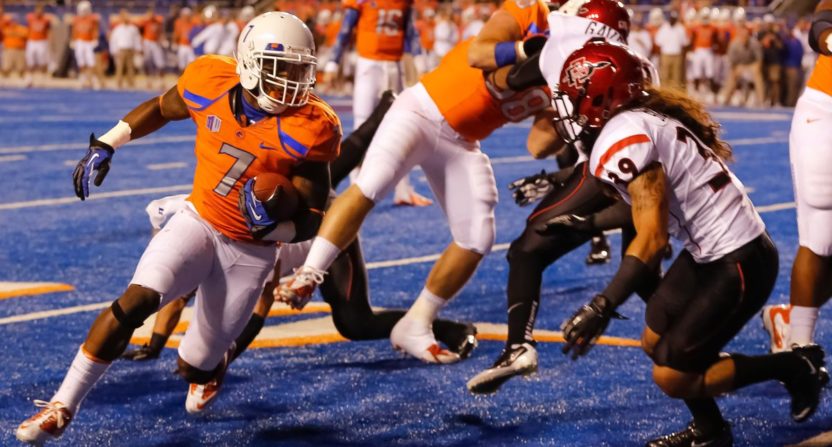 You will soon get the sense our voting contributors this week feel pretty strongly about the success Boise State will have this season. The Broncos have developed a knack for getting tripped up along the way in recent seasons, but our staff is confident that will change this fall. The Broncos took all of the first-place votes, and Colorado State managed to stay just ahead of the defending division champion, Wyoming.

Similar to the Mountain Division, our staff’s voting members this week were all in on San Diego State. The Aztecs are the defending division and conference champions, and they may have the easiest path possible to get back to the conference championship game.

Wyoming’s quarterback may be getting all of the NFL Draft buzz from scouts and analysts, but our staff is slanted in favor of Boise State’s Brett Rypien. Rypien will be a huge factor in Boise State’s expected success this season, so it makes sense he would get the nod for this preseason prediction from three of four voters.

Oh, hey. Another preseason prediction sure to please Boise State fans. Bryan Harsin has been a point of discussion for us this week, but with a Broncos team expected to win the conference championship and perhaps make a serious run back to the New Year’s Six, was this really a shock? Wyoming’s Craig Bohl is definitely respected among our panel, but this could be the year of the Broncos.

Bart: Boise State will finish the season ranked in the top 10.

Matt L: Boise is Boise again, at least in spurts. When we did the Comeback roundtable on the Mountain West, we wondered if Boise State could get back to being the dominant program of the Group of 5 that they used to be. And after a few down seasons by their standards, it seems that with the lack of the complete package at Wyoming or at Colorado State, and with San Diego State not quite as good as they were a season ago, this shapes up for Bryan Harsin’s team to get back to at least the top of the Mountain West. While they may not have enough to quite challenge USF or others for a NY6 bowl, taking a step forward will at least relieve a little pressure on Bryan Harsin and get the Broncos back where they feel they belong.

Phil: Wyoming will to travel to Iowa City and beat the Hawkeyes on September 2. Iowa always seems to take two or three games to get going, and the Cowboys have an NFL ready QB in junior Josh Allen. He’ll be able to carve them up just enough to pull a shocker in the season opener for both programs.

Kevin M.: Picking Boise State to win the conference is hardly a bold prediction, as everyone on the staff submitting picks and predictions is calling for that. But going out on a limb to say the Broncos will once again be returning to the New Years Six may be bold enough for me, considering I think USF is going to be the best Group of Five program on the field this season. But Boise may have the easier path, even with having to beat San Diego State twice (although a split could work out, but that means the loss has to come in the regular season). Boise State’s non-conference schedule should carry more weight than USF’s, and that could end up pushing the Broncos just ahead of the Bulls at the end of the year.