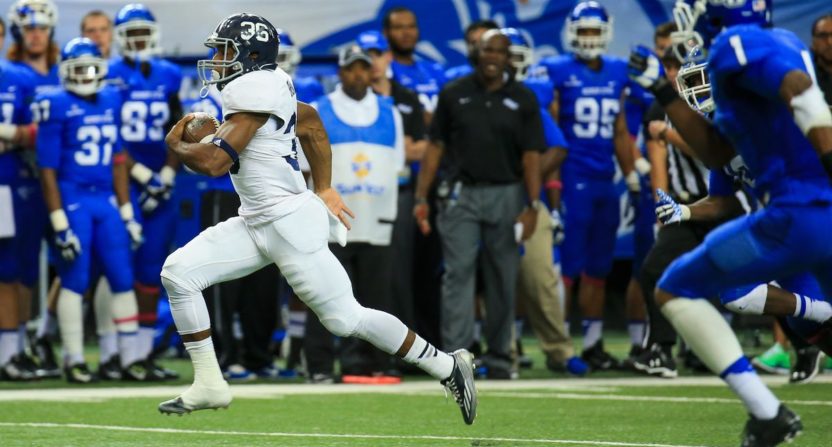 Every week leading up to the new college football season, our staff at The Comeback comes together to respond to one question facing the conference highlighted in our 2017 preview coverage. This week, we’re focused on the Sun Belt, a conference that deserves your attention this year.

The Sun Belt Conference never seems to get the same amount of attention that the other Group of Five conferences routinely do. There is no Boise State or Houston to be found in the conference. Instead, there are a handful of relatively new FBS programs still working to improve their programs to be able to make for a sustainable future. The conference is also home to a future FCS program, so the Sun Belt has had its fair share of struggles in the world of college football.

Which brings us to our weekly roundtable question for our college football staff at The Comeback.

When discussing the Group of Five conferences, the Sun Belt Conference often flies under the radar. Nestled in the shadows of the SEC, the Sun Belt is easy to overlook for most casual football fans. Why should people be paying close attention to this conference in the fall?

Matt Lichtenstadter: It’s the Fun Belt, y’all! But beyond that nickname, which should get this conference plenty of attention alone, there are some good teams in this conference that are fun to watch. Appalachian State, Arkansas State and Troy are all solid programs that you’ll see play some big boys in non-conference play, but have all been consistent and steady to grow. But because of the lack of big-name programs, or even because it’s not the big Group of 5 conference that plays national TV games on weeknights, the Sun Belt does get lost in the shuffle. But look out for those programs, and eventually Georgia State too. The Panthers are moving into the stadium formerly known as Turner Field, which could really set them up for a promising future, if not a slow build.

The Sun Belt is a stepping stone league for many, but an entertaining one at that. Don’t underestimate its teams and what they can do, because many, as we saw with South Alabama last year, can pull off upsets over the big boys.

Bart Doan: When people decry the number of bowl games (which will forever be silly in my mind), they don’t view what a positive impact some of those games can have on the exposure of teams from smaller conferences, and probably no conference has benefited more from that fact than the Sun Belt.

Kevin McGuire.: OK, so it’s not the SEC or even the American Athletic Conference. But you know what? There is still some fun football to be watched in the Sun Belt with new programs continuing to develop and build, and some good rivalries throughout the conference. Appalachian State has come a long way since upsetting Michigan as an FCS power, and they and Arkansas State are each capable of making a run to the conference championship this season. If you can get past the paycheck games a good number of these programs will play, you could be in for a fun conference title hunt within conference play.

And don’t be surprised if a few of these programs give some power conference programs a good tussle. For instance, don’t be shocked if Georgia State gives Penn State a tougher game than you might suspect.

Terry P. Johnson: The casual fan should tune in because it’s one of the most exciting conferences in the land.

With very little fanfare from the media, the Sun Belt had a fine season in 2016. The teams at the top of the league proved that they could play with anyone, as Troy almost shocked Clemson and Appalachian State nearly upset Tennessee. South Alabama captured everyone’s attention in non-conference play by defeating Mississippi State and throttling MWC champion San Diego State.

Of course, the most exciting story about 2016 was the way Arkansas State finished the season. The Red Wolves struggled out of the gate, dropping all four games in non-conference play, including a heartbreaking home loss to Central Arkansas. Rather than quit, ASU continued to fight. The Red Wolves won eight of their final nine contests, and earned a share of the Sun Belt title – their fifth in the last six seasons.

While certainly not all-inclusive, the last two paragraphs demonstrate the need for all fans to watch Sun Belt football. I strongly suggest tuning in whenever you get the chance. You won’t regret it.