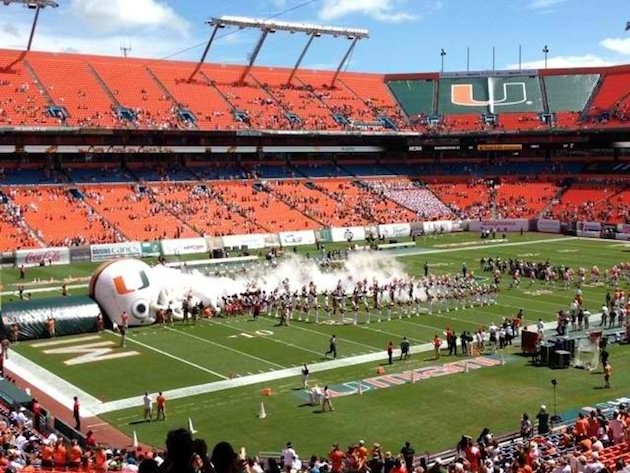 There are currently eight college football teams — seven FBS and one FCS — that play their home games in NFL stadiums (not counting Minnesota’s TCF Bank Stadium, which is temporarily housing the Vikings), and at first that sounds pretty cool. If you play at UMass, you get to use the same Gillette Stadium locker room as Tom Brad. If you’re a student at Georgia State, you get cheap tickets to watch your team play six times a year at the Georgia Dome.

But often the deal isn’t quite as sweet as it seems, according to College AD, a website geared toward athletic department personnel. College AD points to Temple’s deal with the Eagles that allows them to play home games at Lincoln Financial Field, which requires the school to pay $1 million in rent, plus stadium operating costs, without benefiting from parking or concession revenue.

Meanwhile, the mayor-elect of Philadelphia is blocking Temple’s ability to build a stadium of its own. It’s a pretty wacky situation, when you break it down, as College AD does here:

What makes the Temple arrangement seem additionally unusual is that both the stadium and the university are public entities. The Linc, although run by the Eagles, was built with public funds, and Temple is a state university. In essence, the city is making its largest public university pay a private, third-party NFL franchise to rent a publicly-owned building, then blocking that same school from using those funds to build its own stadium and cut-out the NFL middleman.

The more you look into these college-professional football stadium partnerships the messier they seem to get.

Back in January, the University of Buffalo’s SB Nation site, Bull Run, did a thorough breakdown of all these partnerships. Here’s the full list:

Bull Run found variance in how effective and mutually beneficial these deals are, but noted poor attendance for college games at several of the NFL stadiums and the vast distance from campus at others. Take the UMass-Gillette Stadium partnership:

UMass at Gillette seems to be the poster child of how not to share a stadium with a professional team. Being almost 2 hours away from campus greatly impacts student attendance, and the Minutemen aren’t a good enough program to attract the fans to make up for that loss.

In the end, Bull Run concluded, the arrangements works best if — and this will surprise no one — the college team occupying the stadium is actually sort of good.

Performance and Pedigree Matter: Fans will respond to a winning team; is it any surprise that all four teams had the hgihest average attendance in the years that they had their best records? Pitt by far had the best attendance of the 4 schools that I listed, and that is thanks in part to consistent appearances in bowl games, and a rich football history filled with a Heisman Trophy winner, and several big-name NFL players.

There’s no definitive answer to whether or not these college-team-in-a-pro-stadium arrangements are worth it for the schools, but paying big fees to play in oversized faraway stadiums doesn’t sound like a great deal.