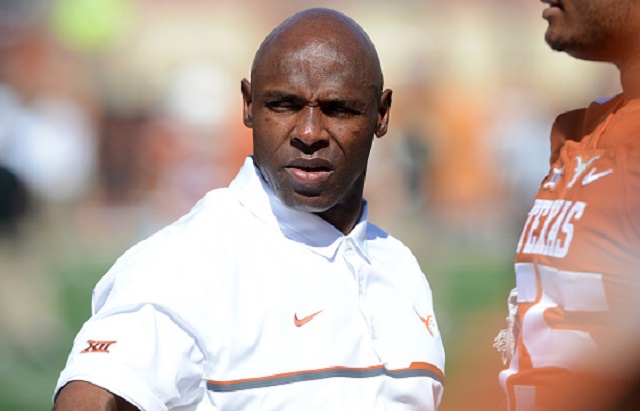 Just days after losing to Kansas, it’s clear that the Charlie Strong era is coming to an end at Texas. Even if the Longhorns had beaten Kansas, Strong likely would have been on thin ice, but losing in Lawrence makes it a near certainty that Strong will be out in Austin at this time next week.

Despite the obvious laughs that “he lost to Kansas” brings, there are fair arguments for both keeping and firing Strong. On the cusp of 5-7 or 6-6 certainly isn’t where anyone expected he would be after three years, but his team is very young and has proven at times this year that it has the talent to succeed. There’s a reasonable chance Texas, with this group of players, could be challenging for a Big 12 title in a couple years. Does Strong deserve that chance? Should it have happened sooner? I understand your argument on either side.

But once Strong is officially fired, and once the Longhorns hire another coach, it’s important they learn from this debacle, because Strong never got the treatment he deserved in Austin, even from day one. It’s not just the will-he-stay-or-will-he-go nonsense that floats around the program weekly, thanks to anonymous sources. It’s the fact that even before he had coached a game, the all-powerful Texas boosters were already working against him.

When Strong arrived at Texas in 2014, fresh off bringing Louisville to new heights, he was celebrated by many as an outstanding young-ish coach with a bright future. However, Texas booster Red McCombs made the ridiculous assertion that this accomplished head coach should instead be a “position coach” or a “coordinator.” He said the choice was “a kick in the face.”

“I don’t have any doubt that Charlie is a fine coach,” he said. “I think he would make a great position coach, maybe a coordinator. But I don’t believe [he belongs at] what should be one of the three most powerful university programs in the world right now at UT-Austin.”

McCombs’ comments set off a discussion about race relations at the university, and the racist comments didn’t stop there. Others opined that Strong isn’t a “hip hop coach,” a supposed compliment but one that was actually clearly meant to say “he’s a good coach, because even though he’s a black coach, he’s not that black.”

The truth is, Strong is a very good coach. He developed Teddy Bridgewater and put together nasty defenses at Louisville, and he was a star defensive coordinator under Urban Meyer at Florida. He will get another good job soon, and he will thrive. Heck, if Houston loses its coach, Tom Herman, to Texas, it could do far worse than to hire Strong.

This time, Texas will surely attempt to appease its top boosters when it hires its new coach. It’s just about impossible to handle the situation this poorly again. But no matter how Texas handles this next search, it’s important to note how poorly the Longhorns treated Strong. We shouldn’t be surprised when a great coach is set up to fail, and ultimately does.

The Big Ten-SEC rivalry is back

For the better part of a decade, the Big Ten couldn’t touch the SEC in national prominence. However, now that the Big Ten has some of the best coaches in the game, the conference is thoroughly back in the national picture, with two bona fide College Football Playoff contenders (Ohio State and Michigan) and two dark horses (Penn State and Wisconsin).

Most of the teams in these two conferences are competitive, and based on the Sagarin statistical ratings, the Big Ten and the SEC are so closely matched that they could put on a helluva conference challenge.

The bottom of the Big Ten is still awful, but even so, if each Big Ten team were to play the SEC team that corresponds with its place in the conference, there would be nine games between teams ranked within 10 spots of each other. That includes No. 1 vs. No. 2.

The SEC is still probably the best conference in college football, top to bottom, but the Big Ten has more teams at the top. Which is better overall? Well, that’s a pretty evenly-matched debate, and it’s great to be able to have that debate again.

Congrats to the little guys

It’s been a strange year in college football. Washington and Colorado both look prime to go to New Year’s Six bowls, while Notre Dame (4-7) and Oregon (4-7) will both finish the season under .500. Joining the Irish and Ducks with mediocre-to-bad seasons are Michigan State (4-7), Texas (5-6).

But in such a strange year, we also got some feel-good stories, with lots of teams that hardly ever sniff the postseason now making game plans for the holidays. Among them:

It’s going to be a long time before all of those teams are bowl-eligible again. Hopefully fans are enjoying a year that came from hardly no expectations.