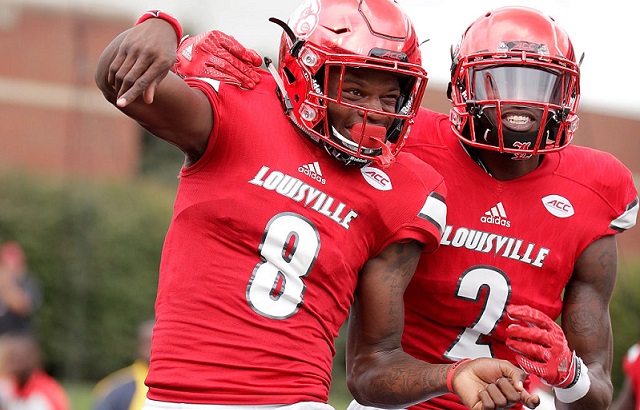 Will the College Football Playoff pick the best teams, even if they don’t have a conference championship?

Before this week, college football’s regular season looked like it was going to end without much fanfare or controversy. Alabama, Michigan, Clemson and Washington were all undefeated, and dominating the rest of college football.

And then three of them had to go ahead and lose.

Thanks to a crazy week, the College Football Playoff picture just got a lot more convoluted, and we could have an unprecedented situation on our hands: Two teams that don’t even win their divisions could theoretically make the Playoff.

If all of that happens, then this group of teams could theoretically be fighting for three Playoff spots:

In this scenario, it is very likely that Clemson would also make the Playoff as a No. 2 seed. The Tigers would have the best wins of the group, in addition to being conference champions. However, the final two spots get very interesting.

The committee has shown deference to conference champions before, choosing Ohio State over “co-champions” Baylor and TCU in 2014. However, those teams had similar resumes. Ohio State and Louisville have been more consistently dominant than the potential Big Ten champion (Wisconsin or Penn State), and both have better resumes than Washington.

One would hope the Playoff committee would choose the four most impressive teams to make the Playoff. In this case, due to random luck and arbitrary scheduling, it might turn out that two of those teams couldn’t even win their divisions. Hopefully, the committee can look past that.

The biggest upset of the season

Whenever there’s a massive upset, some people like to claim that the upset is one of the biggest in generations, and others like to rain on those people’s parade by accusing them of recency bias. But make no mistake — this weekend, we witnessed the biggest upset of the 2016 season, even if it wasn’t your traditional underdog.

The 5-4 Iowa Hawkeyes, underachievers for much of the season and coming off a 41-14 loss to Penn State, took down undefeated, No. 3 Michigan on a last-second field goal.

Going into this game, it was impossible to call Iowa anything other than a massive underdog. The Hawkeyes hadn’t played well all year, and Michigan had been arguably the most dominant team in the country. The Wolverines just seemed too flawless for an upset to even be possible. I grew up an Iowa fan, and I wrote that this was the least confident I had ever been in an Iowa game.

I have been watching Iowa football since 2002 and have never been less confident in then winning a game. So Go Hawks and stuff.

It turns out, I had good reason to be pessimistic. According to the S&P+ projections, Michigan had a 95 percent chance to win, with a projected margin of almost 28 points. No other game with such a wide margin had ended in an upset this year.

Well … rounding up, we finally got that "Team with a 95-99% S&P+ win prob" upset we've been looking for. Teams in that category were 49-0. pic.twitter.com/HwOp0VPQwF

This wasn’t a fluke win, either. Iowa actually outplayed Michigan. Play that game again, with the same statistics, and S&P+ says Iowa would win two-thirds of the time.

This is no knock on Iowa — Michigan is damn good — but if there was any question about the upset of the year, there isn’t anymore. The Hawkeyes got the biggest upset in their history, and probably the biggest of 2016 too.

Salute to the Trojans

Lost in all the hoopla of a massive week of upsets was the arrival of the biggest upset story of the college football season: Troy is ranked.

The Trojans are ranked 25th in the latest AP poll, becoming the first Sun Belt team to ever be ranked in the Top 25. They’re 8-1 this year, with the lone loss coming by six points at Clemson — better than most teams could do — and they’re barreling toward a Sun Belt title.

Sun Belt teams shouldn’t be anywhere near the Top 25. It’s the worst of the Group of Five conferences, and its teams are relatively poor compared to the rest of college football. Troy ranked 102nd among public schools by bringing in $27 million to its athletic department this year. That’s $165.5 million less than Texas A&M, which is ranked just two spots ahead of the Trojans.

Troy is unlikely to make a New Year’s Six bowl, as Western Michigan, Boise State or San Diego State will take that spot, but this season has still been entirely unprecedented for the Trojans. They’re one of the top 25 teams in the country — a lot of programs with a lot more money can’t say that.