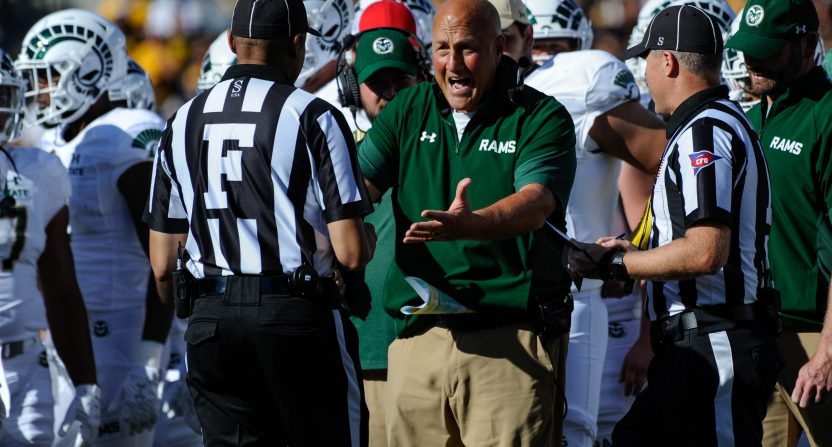 Steve Addazio must have been hoping that taking the Colorado State job in 2020 would help him revitalize his coaching career. But anyone who was paying attention to the finish of Friday night’s game between the Rams and the Utah State Aggies must be left scratching their heads what kind of coaching job he’s doing over there.

With time running out and the Rams down 26-24, the offense powered its way down the field in order to get within field goal range so the 3-3 team could improve its bowl chances. Thanks to a great pass by Todd Centeio to Ty McCullouch, they got the ball all the way down to the 24-yard line for a first down with 11 seconds left. That’s plenty of time for the Rams to get to the line of scrimmage, spike the ball, and then run one more play to either get further down the field or take a shot at a touchdown. That’s the logical move.

But the Rams did not do the logical thing. Instead, they hustled the field-goal unit onto the field…with 11 seconds left…and rushed a field goal attempt that sailed left, ending the game with an inexplicable loss.

What an absolute nightmare pic.twitter.com/7gKcuVX3nm

“He doesn’t need to run off the field, he can spike it. They picked up the first down,” you can hear the announcer say in disbelief. “Colorado State a little bit baffled here. They’re running the field goal unit on. They don’t need to do this.”

Everyone seemed confused afterward, including Addazio, the Rams, and the announcers.

Not only could CSU have spiked the ball; CSU would have had 9 seconds left, enough time to throw another pass!

Imagine being a head coach and allowing this to happen instead of a leisurely spike. Imagine. https://t.co/gqyT8WvG4V

This is one of the worst cases of clock management we've probably seen in years. Mind-boggling. Horrible way to lose for Steve Addazio and CSU. https://t.co/qCDdROtF40

There's definitely a theme to how fans are reacting to the end of #CSUvsUSU… pic.twitter.com/HyYdH7H9oi

UPDATE: The worst part? It sounds like the field goal unit just kinda went out there before Addazio told them not to.

Steve Addazio says they wanted to spike the ball, but the "fast field goal" team was ready in case it was short for a 4th down. Said they kind of just rushed on, weren't sent on. "No one sent them in, but they took off on the field."