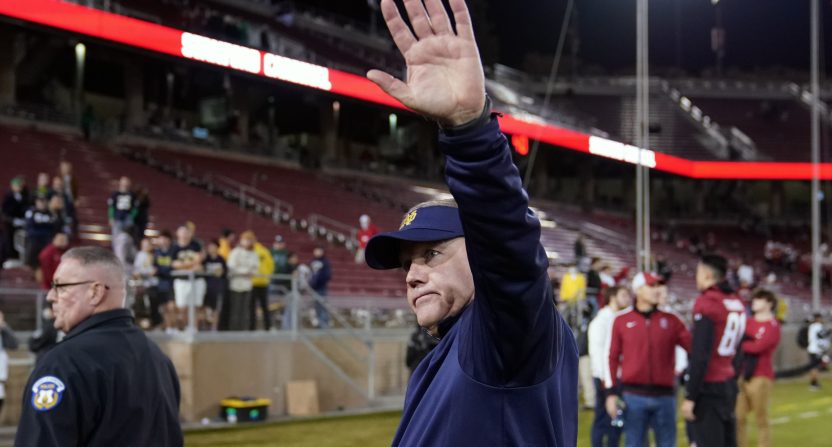 Another massive coaching change is reportedly happening in college football. Pete Thamel of Yahoo! Sports reports that LSU is expected to hire current Notre Dame head coach Brian Kelly. Thamel adds that an announcement “could come as early as [Tuesday].”

Sources: LSU is expecting to hire Notre Dame’s Brian Kelly as the school’s next head coach. An announcement could come as early as tomorrow.

Sources confirm to me, @ClowESPN and @Mark_Schlabach that #LSU is set to hire #NotreDame's Brian Kelly as its next coach, a stunning move on the Bayou.

Kelly, 60, has led Notre Dame to an 11-1 record this season. They came in at No. 6 in last week’s College Football Playoff rankings. It’s Kelly’s fifth straight double-digit win season at Notre Dame, after he became the school’s head coach ahead of the 2010 season. He joined Notre Dame after leading Cincinnati to a 12-0 record in 2009.

LSU announced in October that they had mutually agreed to part ways with head coach Ed Orgeron, despite Orgeron leading the Tigers to a national championship in January of 2020.

On Nov. 22, Kelly was asked about the possibility of ever leaving Notre Dame:

Brian Kelly asked if he'd ever leave Notre Dame, aside from retirement: “No. I mean, look, I think Mike Tomlin had the best line, right? Unless that fairy godmother comes by with that $250M check, my wife would want to take a look at it first. I'd have to run it by her.”

Well, it appears the fairy godmother has arrived for Kelly.

To say that Notre Dame coaches, admins and boosters I have spoken with in the last 15 minutes have been blindsided is an understatement. An absolutely shocking development in South Bend. https://t.co/Lnwk06Eqfu

This is usually how these things go, but Brian Kelly has ghosted everyone at Notre Dame. Just spoke to one assistant who saw reports on his phone tonight as he was exiting a recruit's home: "The news broke when I walked out of the house, so I look like a f—– a–hole."

And this news comes just one day after Lincoln Riley left Oklahoma for USC.

Here’s a sampling of the reaction to Kelly reportedly leaving Notre Dame for LSU:

Just got my report that my medical team r very pleased with the report of the PET SCAN . They claimed that the chemotherapy has thus far been successful. I believe ur 🙏🙏🙏have helped . Now with news @CoachBrianKelly is heading to @LSU – I now need a good cardiologist! Ha ha

Brian Kelly literally did the Irish Goodbye to Notre Dame

I think my favorite part of this coaching cycle is getting to see LSU folks praising Notre Dame football.

For years, Brian Kelly had teams that basically played to their recruiting level at ND. I understand the logic of bringing him to a school that can sign top-3 classes.

………don't know if it'll WORK, it could be an AMAZING disaster, but I understand the logic at least.

Brian Kelly is so underrated. He’s had a top five program at Notre Dame the last five years with recruiting restrictions and he’s gonna kill it with LSU’s advantages.

Brian Kelly is a SOLID hire, it is not be the sexiest but his track record at Cincy and ND is IMPECCABLE

Also this def makes the Riley stuff seem not real

With the Notre Dame job possibly opening, this might be the second thing to fall into Urban Meyer’s lap this year.