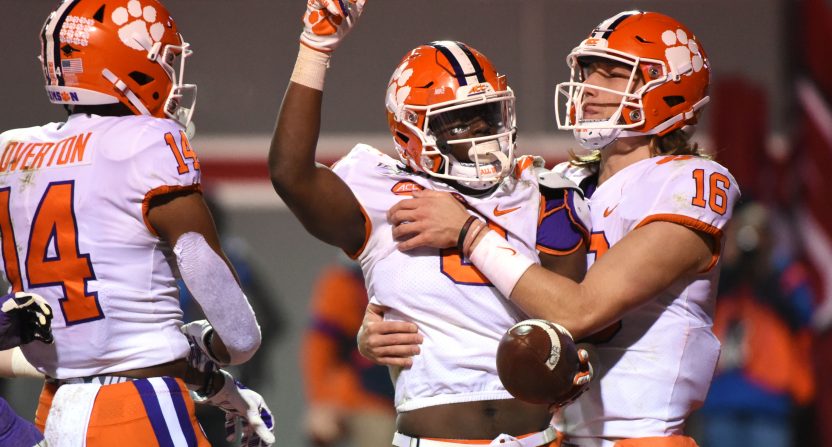 As the college football regular season reaches its climax, there are only a small handful of teams that still have a realistic chance at making the College Football Playoff and winning the national championship. And to be quite honest, that list is probably a lot smaller than you or I might want to believe.

It’s more painfully obvious than ever that the gap between the very elite in college football and the upper middle class (let alone to your run-of-the-mill Power 5 and Group of 5 schools) is getting exponentially larger with each passing season. That’s not just according to this current season, but the recent trends since the advent of the College Football Playoff.

Currently, according to the Action Network, Ohio State is the current national championship favorite at 3/2 odds. The #1 team in the rankings, LSU, is actually third in the bookies’ minds at 15/4 behind even Clemson at 9/4. Following those three teams are Alabama at 10/1, Georgia at 13/1, and a tie between Oklahoma and Oregon at 19/1.

For all the hope around current unbeatens Minnesota and Baylor, they sit at 150/1 and 100/1 odds respectively, light years behind the big dogs in their own respective conferences. The next best teams are Utah at 45/1 and Penn State at 50/1. No other team is better than a 100/1 shot to win it all.

While the NCAA Tournament prides itself on upsets and buzzer beaters and the excitement and unpredictability of March Madness, you could very easily predict at least half of the CFP field each year before we even get to the end of November. And when you dig through the numbers beyond that, the elite class in college football who have a realistic chance at the national championship every year is microscopically small – Alabama, Clemson, Ohio State, Oklahoma, and Georgia. That’s it. That’s the entire list.

Out of 20 spots over 5 years, the College Football Elite 5 have comprised 75% of the spots on offer. That is an absurd ratio. Compare that to the NCAA Tournament Final Four where 20 teams have made it to college basketball’s biggest stage since 2014.

Yes, there are years where teams can momentarily break into the top 1%, take LSU and Joe Burrow this year for instance. Oregon in 2014 with Marcus Mariota was another example. But even when teams like Notre Dame and Washington and Michigan State have snuck into the playoffs, they’ve done so with disappointing results.

College football’s “Others” have only accounted for one solitary playoff victory – Oregon’s semifinal win over Florida State in the first year of the playoff. The top five schools have never lost a playoff game to a school outside their uber-elite rank. And those games have been extreme mismatches on the field.

The knock-on effect is the creation of a glass ceiling for programs that consider themselves elite, but are always seemingly a step behind with lots of 2, 3, and 4 loss seasons that are just good enough to give fans hope, but just average enough to consistently be left behind. Blue blood programs like Michigan, Texas, Penn State, Florida, Auburn, Wisconsin, and USC are yet to make the playoff and likely won’t be doing so this year either.

In examining each week of the CFP rankings since 2014, Bama, Clemson, OSU, Oklahoma, and Georgia have been dominant. Unsurprisingly, Alabama and Clemson are well ahead of the rest of the field with more than twice as many appearances in top four slots than anyone else. There are guest appearances from Notre Dame and Michigan here, but their lack of playoff success is well documented.

Teams with at least 5 weeks in CFP Top 4

The edge these teams have are seen throughout their programs, but it starts with talent and recruiting. Of course, recruiting rankings can only take you so far. See the cases of USC (whose head coach is expecting the sack any minute) and Texas (who is perpetually in a state of “being back” without ever actually getting there).

Alabama, Clemson, and Ohio State are consistently in the Top 5 according to the 24/7 composite recruiting rankings. Clemson is regularly in the Top 10. Then there is Oklahoma, who may just be a step behind, but now is a good time to remind you that the Sooners also happen to have the last two Heisman Trophy winners who were both transfers.

If anything, this may be where LSU can stake their claim on being included in the college football elite, ranking lower than seventh only once since 2015. They certainly have the pedigree, the talent, and the success this year to be deemed worthy of inclusion. In fact, the only thing standing in their way has been Alabama, who they just beat for the first time in eight tries last week. If LSU can consistently get past Alabama in the years to come, perhaps they can squeeze Georgia out for the last spot. For the love of Paul Finebaum, there just isn’t enough room for three SEC teams in this grouping.

Sure, there will be chances for teams on the outside looking in to break through and break into college football’s elite. But the journey to doing so is so difficult that it’s hard to imagine any team outside this class doing so on a consistent basis.

Can Minnesota not only beat Ohio State in the Big Ten title game, but then go on to beat Clemson in a semifinal and Alabama in a title game?

Can Baylor upset Oklahoma to prove themselves as legit? Then win the Big 12 title game, beat LSU in a semifinal, and topple the Buckeyes to win it all?

For either team to accomplish this feat, it would be considered the greatest three game stretch in college football history. That is what it would take for a team to go through three of the elites.

At this point it’s even hard to see Oregon or Utah get a playoff win if they’re lucky enough to make it from the Pac 12, let alone teams like Michigan and Penn State or Auburn and Florida. It’s just getting harder and harder to envision a world in which any of these teams outside the elite can realistically compete for a college football championship.

Let this last fact put the current state of play in college football in proper perspective. This week Ohio State plays a road conference game at Rutgers. Yes, Rutgers being in the Big Ten is a punchline in and of itselfm but the Buckeyes are favored by over 50 points. Fifty! Five-Zero! In a conference game! On the road! Did you ever think you would see the day where that would happen in major conference college football?

Rutgers are 2000-1 underdogs at the South Point in Las Vegas, meaning you can bet $5 on the Scarlet Knights to win $10000. Those are the same odds that were once given to Kim Kardashian becoming the President of the United States and Elvis still being alive. I think I’d rather put my money on a Kardashian/Presley presidential ticket in 2020.