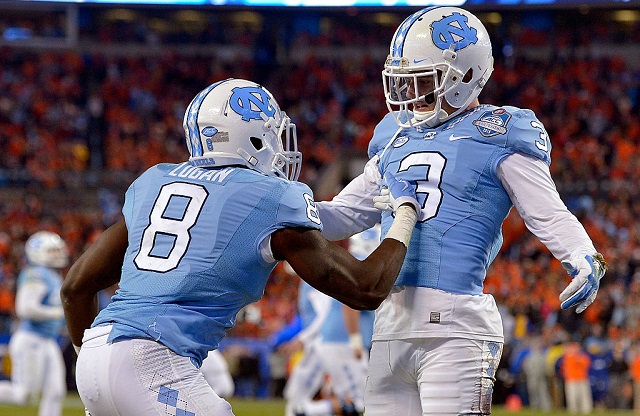 The term “sleeping giant” gets tossed around college football quite a bit, and with good reason. While the sport is now 130 teams deep, just 15 to 20 have a chance to win a national title each year, which leaves quite a few programs out in the cold when it comes time to discuss serious contenders.

If you write about college football, you’re faced with one of two options: discuss power programs or search for the up-and-coming name that could usurp them someday.

But in a landscape where athletic programs are (reportedly) taking in more than $190 million annually, it’s not as easy as asking which football team has a good coach or a few good players right now. The sleeping giants — those most likely to create upheaval within the sport’s status quo — need to have the resources to pay coaches and build facilities, already possess fan support, and have access to local recruiting.

Schools like Georgia Tech, Louisville and Virginia Tech could be added here too, theoretically. But they don’t necessarily fit the same mold as the names above. Louisville has basically turned into a pro team in a growing city. Georgia Tech has seen plenty of success in the past, and is located within one of the country’s largest metro areas. The Hokies have seen 30 years of near-uninterrupted success now.

But the other six programs listed above all have similar characteristics with one another: Power conference state schools with growing (and talented) recruiting footprints, relatively recent coaching hires and a lack of historic success in the sport.

According to SB Nation back in January, Virginia and North Carolina produced the eighth- and ninth-most blue chip recruits in the country from 2013 to 2017. New Jersey was 12th on that list, while Illinois was 14th and Maryland was 15th. All six programs were also among the top 44 on USA Today’s annual athletic department finances list, with Rutgers and Maryland set to jump up once each starts receiving full conference payouts. (The Big Ten delays full payouts for six years following admission.)

North Carolina and NC State are the only teams to exhibit something resembling consistent success of late, with the Tar Heels being the beneficiaries of the ACC’s divisional alignment. (They’re in the more manageable Coastal, while the Wolfpack are in the top-heavy Atlantic.) UNC has won six games or more for nine straight seasons, but recorded double-digit wins just once (2015). State’s had a winning record in six of their last seven seasons, but never reached more than nine wins.

But what’s held each of these six schools back? It’s different for each.

Proximity to Chicago sounds like an advantage for the Illini, and yet schools like Notre Dame, Michigan and Ohio State have regularly walked in and taken the best recruits in the state. Alums are local, so the support should be there from fans. But being so close to a big pro sports town (five major teams, plus MLS) takes attention away from Illinois’ upside. The team’s broken through here and there during its history, but a long-time home in the Big Ten means extended periods looking up at bigger schools. Now in the West division, there’s a potential opening with Wisconsin the only consistent team atop that group.

The ACC was long a basketball-centric league, and Maryland was far more focused on that sport, though not without temporary upticks on the football field. Local recruits have gone anywhere from the Northeast to Southeast — and recently, the Midwest too. Budget issues were a major part of the Terps’ move to the Big Ten, and the thought is that full payouts will fix the program’s ills. DJ Durkin was a quality coaching hire, and recruiting in the DMV has looked better. But they’re still in the East with Michigan, Ohio State and Penn State, and sitting near a lot of pro sports interests.

Like all of the North Carolina ACC schools, basketball is king in Raleigh. But the football program is well-supported locally and sitting right on top of a huge talent base. Battling two in-conference private schools with stricter recruiting standards also helps, but not enough to offset SEC incursions into the state. Program finances are barely breaking even by the USA Today numbers, though. And they may still be looking for their long-term hire at coach. They don’t have the brand of UNC, but the uphill battle for football relevance could be easier because of that fact.

The Heels are the most basketball-centric of all of these schools, and that’s always stood in the way. But recent results show they could be knocking on the door of some lasting success under Larry Fedora. Fan support for UNC has been poor, and they’ll always play second fiddle to hoops. However, with a growing ability to attract local blue chip talent, they could be the giant most likely to wake up out of this group.

The Scarlet Knights have been historically bad, aside from a well-timed run in the 2000s that ultimately earned them a Big Ten invite. Rutgers is a few years out from the financial windfall of B1G membership, which will certainly help. But being in the East creates an uphill battle, while PSU, OSU and Michigan walk into their backyard and take top Garden State talent. The school also suffers from local competition. The New York-New Jersey area includes eight Big Four teams and two MLS squads as well. Rutgers’ battle for attention is further exacerbated by the suburban nature of New Jersey, which lends to other weekend priorities.

The Hoos should be close enough to Richmond, Baltimore and D.C. to attract talent from all of those spots, and yet it’s been tough under any head coach to do so for long. Recent basketball success and a focus on Olympic sports has grabbed attention away from students, while other fans are not hyper-local. UVA’s high admission standards create a tougher bar for recruits to jump over than other local competition. Virginia is still probably situated well enough financially to rise quickly with the right coach. (We’ll see if that’s Bronco Mendenhall.)