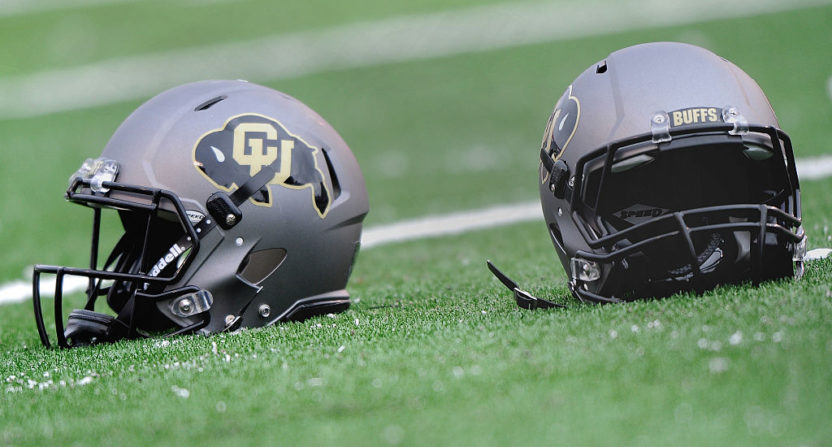 The University of Colorado football team surprised a ton of people and dominated their way to an appearance in the Alamo Bowl in 2016. However, something like that doesn’t matter as much when the program is in the midst of a scandal.

On June 1st, the program was accused of a cover-up of domestic violence allegations against assistant coach Joe Tumpkin. These were the details from our original report:

A woman who claims to have been abused by the Buffs’ assistant coach says she attempted to contact head coach Mike MacIntyre multiple occasions only to have an email deleted by an assistant of MacIntyre.

According to legal documents obtained by The Daily Camera, the woman filed a notice of claim that she intended to sue the university and seek $3.7 million in compensation, which would account for $5,000 per day during the entire saga over the span of two years. The abuse allegedly went on from February 2015 through January of this year at university-provided lodging during a university-sponsored trip with boosters and regents. Furthermore, the woman claims to have been on the receiving end of verbal abuse on a phone provided by the university.

In the wake of these allegations, Colorado has punished their chancellor, athletic director, and head football coach for how they handled the allegations.

Chancellor Phil DiStefano has been suspended 10 days without pay by the school, while both head coach Mike MacIntyre and athletic director Rick George were “reprimanded for mishandling their response to allegations of domestic abuse against former Buffaloes assistant coach Joe Tumpkin,” according to ESPN.

The school’s board of regents along with the CU system President Bruce Benson announced the sanctions on Monday. This came after they released the findings of an investigation into the allegations conducted by the WilmerHale Law Firm.

The findings of the investigation determined the trio of DiStefano, MacIntyre, and George “didn’t intentionally cover up the information they received or break the law.”

“I wish to say again that I sincerely regret that I did not immediately contact the Office of Institutional Equity and Compliance upon learning of the allegations of domestic violence,” said DiStefano, who recommended his own punishment of the 10-day suspension. “Rather than trying to determine for myself if her complaint fell within our jurisdiction, I should have contacted our campus experts, who would have made sure that she received an immediate response from the university.”

“As I have stated since January, I take full responsibility for my actions and, as the director of athletics, I hold myself to a high standard of conduct,” George said in a statement. “I am fully committed to being part of the solutions that the campus will implement over the coming weeks and months. We will make any necessary changes and support a culture of values and respect and integrity. We must do better — and we will.”

“This has been a difficult time for the university community, and particularly for the woman who brought this to my attention,” MacIntyre said. “When she reached out to me, my first concern — which I shared with her — was for her safety. I immediately reported to the athletic director for direction. All of us involved have learned that we have additional reporting responsibilities, and we will follow those procedures in the future. I had never been in a situation where one of my coaches was accused of abusing a spouse or partner. But, as the regents and President Benson recognized, I never acted in bad faith.”

On December 9th, Tumpkin’s ex-girlfriend told MacIntyre that Tumpkin physically abused her during their three year relationship. The Head Coach reached out to George a day later and then George relayed the information to DiStefano on December 11th.

The WilmerHale Law Firm came to the conclusion that the three men “had an obligation to immediately report the allegations against Tumpkin to the school’s Title IX coordinator and Office of Institutional Equity and Compliance.” The trio didn’t do this at the time and then George allowed Tumpkin to coach in CU’s Alamo Bowl loss on December 29th, 19 days after first learning about the incident.

“For the athletic director and the head coach essentially to promote Tumpkin for a bowl game when they knew they had on their staff an abuser speaks for itself,” Peter Ginsberg, the attorney representing Tumpkin’s ex-girlfriend said. “The idea that they didn’t know what to do either reflects extremely poorly on their own ethics or is a disappointing rationalization.”