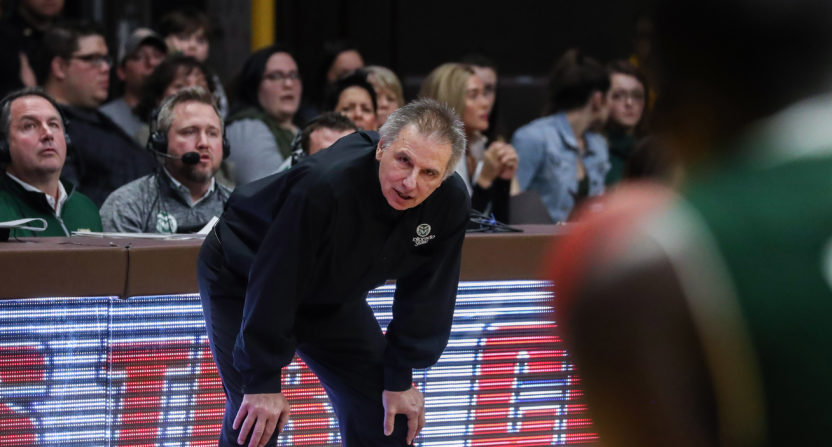 On Thursday afternoon, Matt Stephens of The Denver Post reported that CSU will fire head basketball coach Larry Eustachy. The longtime college hoops coach has been on a paid leave of absence since Saturday as CSU’s athletic department has been investigating his “abusive” behavior within the program (something that Eustachy was also investigated for by CSU in 2013-14).

Larry Eustachy’s tenure as Colorado State’s men’s basketball coach is over, according to a source with knowledge of the university’s decision.

CSU intends to terminate the coach’s contract based on Eustachy violating the zero tolerance policy he previously received regarding his abusive behavior toward players and staff, according to the source, who has direct knowledge of the school’s current investigation.

“We can’t give a guy a zero-tolerance policy in 2014, have the conduct continue in 2018 and then just give him another warning,” the source said.

Despite Eustachy’s alleged behavior toward players, the former Iowa State head coach has gotten plenty of support over the last few days from current and former Rams players.

CSU players even boycotted practice on Thursday, reportedly for a few reasons: disapproval of the Eustachy decision/investigation, lack of communication from athletic director Joe Parker, and interim head coach Steve Barnes is reportedly even more verbally abusive than Eustachy. This is unbelievable, and CSU reporter Justin Michael has the details:

Sources say today's decision for the players to boycott practice was primarily over frustrations with how little communication they have received from AD Joe Parker & the fact that Barnes has been named interim head coach. The players do not want to play for Barnes. #CSURams

According to sources inside the team, Barnes is much more vocal than Eustachy in practice and yells at the players significantly more than the controversial head coach. More than anything though, sources said that Barnes’ role seems to be to have Eustachy’s back and to help keep players and staff members in line- essentially an extra set of eyes and ears for Eustachy.

“He yelled at guys in practice more than Larry… He has no relationship with the guys.”

Barnes has been the associate head coach on Eustachy’s staff for the last 16 years at CSU, Southern Miss, and Iowa State.

And it appears the investigation will carry into next week when the athletic department will meet with Eustachy and his representatives.

CSU players have taken to Twitter to show their displeasure, with junior guard Prentiss Nixon (the team’s best player, averaging 16.5 points per game) having a #FreeCoachE hashtag in one of his tweets.

It's no loyalty in this game no more, everyone tryina save there own ass smh #FREECoachE?

But it gets worse. South Plains College guard Jordan Brangers tweeted on Thursday that he has chosen to re-open his recruitment after committing to CSU. Brangers is a four-star recruit according to 247 Sports and the top JUCO recruit in the country. According to the CSU reporter Sean Star of the Loveland Reporter-Herald, Brangers said that he “really wanted to be [at CSU],” but he doesn’t “want to be somewhere with a lot of drama going on.”

I wanna thank @CSUMensBball for recruiting me and giving me the opportunity to play there, but after further discussion with my family and looking into things I’ve decided to re open my recruitment. Thank you for the respect and support with my decision.

"I really wanted to be there; it's just seeing and hearing that stuff go on, I just didn't want to be somewhere that has a lot of drama going on."https://t.co/T7MIL5c0FV

That’s one hell of a day, and things haven’t been going much better for the Rams overall this season. CSU (10-16) has lost seven straight games, with a few of those being brutal late-game collapses.

But it’s going to be very interesting to see how the CSU athletic department handles things from here, and if the underclassmen choose to stick around with the next head coach (and how much longer Steve Barnes gets to be in the role).