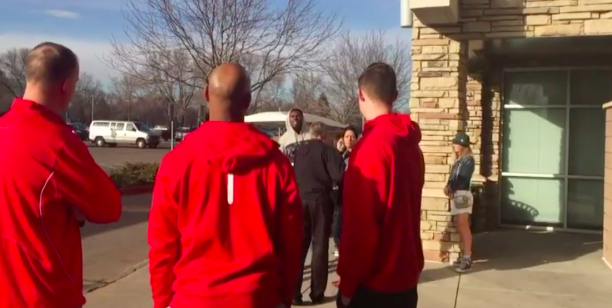 College basketball can be filled with some aggressive play, but most times it usually stays on the court. For New Mexico and Colorado State, it extended way, way after the whistle.

Eustachy spoke to ESPN and said that Rencher was trash talking his players before the game and during it as well. The game was eventually won by New Mexico by a score of 84-71 but during the game, it reached a fever pitch that included pushing and shoving.

Rencher was actually ejected from the game for leaving the bench during the in-game skirmish along with fellow assistant Chris Harriman.

Video of the incident was caught on tape by the Albuquerque Journal, Rencher was waiting by the New Mexico team bus and Eustachy and Omogbo were walking past.

Here is what Omogbo said to ESPN about the incident and what exactly set him off.

“After the game, walking out of the athletic center towards home, the same New Mexico coach was standing right outside the door, and we made eye contact, and he smirked at me and said, ‘Take that L, boy,’ and after that I exploded, after that, both the coach and myself exchanged words back and forth until Coach Larry Eustachy intervened, and I continued walking home.”

In the video captured by the Journal, Eustachy’s wife, Lana mentioned the obstacles that Omogbo had to overcome to get where he is today. Omogbo’s parents and two other family members were tragically killed in a house fire.

According to Eustachy, Rencher just laughed while told.

The run in for the two sides isn’t going to go away anytime soon and the “he said, he said” is going to continue on for a bit while the situation gets resolved. The MWC has already released a statement that it is looking into the involvement of both sides in the incident.