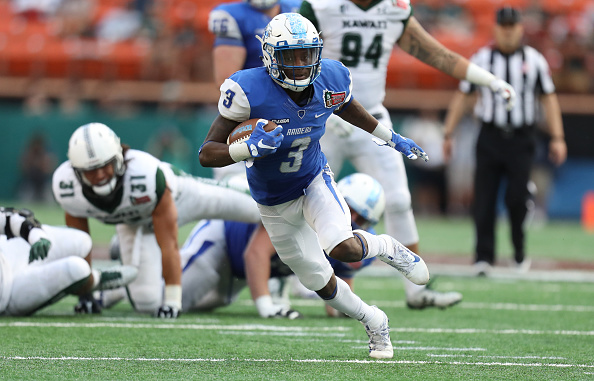 As noted in our C-USA quarterback previews, there’s no shortage of talented triggermen in the league.

Despite losing Trent Taylor, Taywan Taylor, and Carlos Henderson to the NFL, the conference also has a number of very good receivers coming back. In this piece, we’ll take a look at the league’s top pass catchers and tell you what to watch out for in 2017.

Q. Who are the top returning receivers in Conference USA?

4. Ryan Yurachek, TE, Marshall – One of the most experienced tight ends in the conference, Yurachek has had a great career for the Thundering Herd. In three seasons, he’s caught 89 passes for 864 yards and 16 TDs. With most of Marshall’s receivers moving on this fall, he should have an even bigger role in the offense, much like he did in 2015, in which he posted career highs in both receptions (45), yards (417), and touchdowns (9). That should be enough to capture a spot on the all-conference team after earning honorable mention recognition in each of the last two seasons.

3. Jonathan Duhart, WR, Old Dominion – Duhart has been the Monarchs’ second-best receiver over the past two seasons, catching 95 passes for 1,371 yards and 17 touchdowns. He’s also had some monster games during that span, including a 155-yard effort against UTEP last year and a 9-catch, 134-yard effort against Southern Miss in 2015. Now that Zach Pascal is with the Washington Redskins, Duhart will be the go-to receiver for the ODU offense this fall. Expect him to have another huge season, which will propel the Monarchs to another bowl game in 2017.

2. Allenzae Staggers, WR, USM – An honorable mention all-conference performer a year ago, Staggers caught 62 passes for 1,157 yards and 7 touchdowns. He was one of the more explosive receivers in Conference USA last season, ranking third in the conference in yards per reception. More impressively, he had two games where we eclipsed the 200-yard barrier, highlighted by a 6-catch, 292-yard outing against Rice in Week 5. Even though the Eagles will break in a new quarterback this year, look for him to go over the 1,000-yard mark for the second straight season.

Q. Which receiver will have a breakout season?

I’ll go with Lucky Jackson at Western Kentucky. He had a solid redshirt freshman season for the Hilltoppers, catching 26 passes for 395 yards and two touchdowns. Although WKU probably won’t throw the ball as much as it did under Brohm, it still has to replace the dynamic duo of Taywan Taylor and Nicholas Norris, who combined for 174 catches, 3,048 yards and 31 TD’s last season. Jackson seems like the most logical candidate to try to bridge the gap, after finishing fourth on the team in receptions a year ago.

Q. Who is a newcomer to keep an eye on this fall?

While there are a number of new players to watch out for, the one I’m paying the most attention to is Jalen Guyton at North Texas. He had a solid season at Trinity Valley CC last year, catching 45 passes for 968 yards (21.5 ypc) and 12 TDs. He followed that up with a solid spring, and currently sits atop the depth chart at wide receiver. Based on those last two sentences, I think he’ll have a great season, and emerge as one of the top receivers in a league that’s full of great receivers.

This is a tough one. Had Jeff Brohm returned at Western Kentucky, I would have picked the Hilltoppers. However, with Mike Sanford calling the shots, the offense might be a little more balanced than it was under Brohm.

With that in mind, I’ll say that Florida Atlantic is the most intriguing situation. With Kalib Woods’ suspension, there’s not a receiver on the roster who caught more than 24 passes last season (running back Devin Singletary caught 26). I’m curious to see how Kendal Briles adjusts his scheme to the players currently on the roster. He certainly got creative at Baylor, utilizing 390-pound tight end LaQuan McGowan as a receiver.