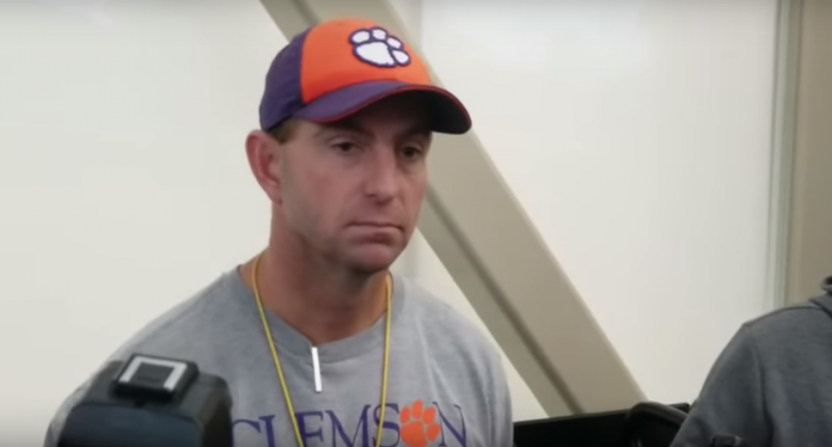 There have always been plenty of media members who blast NCAA football players who opt to skip their team’s bowls in hopes of preserving their NFL draft status, including Doug Gottlieb just last week, but it’s rarer to see it from current coaches.

While many coaches probably aren’t thrilled when their stars opt not to play in a bowl game, most keep quiet about that or even publicly support the player, and that’s logical; they don’t have the ability to control that player’s decision any more regardless of what they say, but supporting a player (or at worst, not bashing them) can pay future recruiting dividends, while criticizing them can hurt a school’s future recruiting. And that made Clemson coach Dabo Swinney’s comments this week remarkable.

Here’s video of those from Clemson site TigerNet (starting around 11:00):

“Does it matter what my thoughts are? It don’t matter. It doesn’t matter. As a coach, if you don’t want to play, don’t play, just let me know who wants to play and let’s go play. Now, my opinion is that I hate it, I don’t like that. And they’ll say ‘Oh, you’re a coach who makes all that money’ and all that crap. I mean, my thing is I don’t choose to live my life that way. Personally, I choose to play. Otherwise, why even play your whole senior year? I mean, you can get hurt in anything, you can get hurt in the car, you’ve got better odds of getting hurt getting in the car than you do playing football. So that’s my opinion.”

“But that’s also a product of the playoff. Before the playoff, you didn’t see all that. Now the playoff comes along, and all of a sudden, ‘I’m not in the final four, I’m going to sit out.’ And that’s an unintended consequence of the playoff system. And not everybody’s a first-rounder. And the flip side of that is I get it, I understand, everybody’s got to make their own decisions, so you sit there and you can’t get mad about it.”

“If that’s what you want to do, go for it. I appreciate it, I want to know who’s all-in, who really wants to play as opposed to being half-in, not really wanting to play, I don’t think that’s fair. So I’d appreciate it if I was in that situation, ‘Hey, I don’t want to play.’ ‘Hey man, let me know so I can get the next guy ready.’ Don’t show up and play in the game if you’re not 100 percent committed to it, if you’re worried or whatever. I just, personally, as a man of faith, I don’t think you should walk around in bubble wrap. I think God’s will is going to be done in your life. That’s my opinion.”

“So I don’t like it, but as a coach, you’d better embrace it. Because there ain’t nothing you can do about it. So I ain’t real worried about it. If we got anybody that don’t want to play, wish ’em well. Love ’em up, wish ’em well, pat ’em on the butt and let’s go get the next guy ready to play. It’s not that big of a deal.”

The big problem with Swinney’s comments here is how different the incentives are for him and for the players in question. It’s interesting that he even anticipates that criticism with “They’ll say, ‘Oh, you’re a coach who makes all that money’ and all that crap;” yes, they will, but that doesn’t make it any less valid. Swinney signed a new contract in 2017 that pays him $54 million over eight years, an average of $6.75 million per year that puts him in the top four coaching salaries, and it comes with everything from two complimentary cars to a country club membership (plus the other benefits boosters just decide to throw in, such as a free condo). And he has a lot of security there.

By contrast, players participating in a bowl game don’t have much security, considering that they haven’t yet been drafted by the NFL. And there have been a whole lot of players who have suffered major injuries in bowl games and seen their draft stock tank as a result, including Jaylon Smith and Jake Butt. Butt did manage to collect on loss-of-value insurance, but not every player can get that, and it doesn’t always pay out, or pay out as much as you’d hope it would.

And yes, there’s the chance for players to improve their NFL evaluation with a good bowl game performance, but many NFL teams’ reports are already written by that point. (It should be noted that there’s also a chance of stock declining with a poor performance, too; playing isn’t always a good thing even if you don’t get hurt.) And many teams don’t really care if a player skips a bowl game; Leonard Fournette and Christian McCaffrey both took that path in 2016-17, and both went in the top 10. Skipping a bowl game also means that the players can use that month for personal training focused on improving their performance at the NFL combine instead of team practices. So there are plenty of economic arguments for players who are already seen as high draft picks to take that route.

And contrary to what Swinney claims, it’s not really about the playoff reducing the value of other bowl games; it’s more about players realizing the risks around bowl games, which likely would have happened even under the old BCS system. Bowls without a title attached didn’t have a whole lot more value to players’ draft stock then than they do currently. And yes, players haven’t opted to skip playoff games yet (so Swinney doesn’t even have to worry about this personally at the moment), and doing so might be perceived negatively by NFL teams considering the stakes involved, so that’s probably not coming any time soon. But the other bowls carry limited upside for players, and a whole lot of risk.

It should also be noted that Swinney’s “I don’t think you should walk around in bubble wrap” and “You can get hurt in the car” comments are completely ridiculous. Yes, both of those things are true; there are plenty of ways to get hurt outside of football. But a football game is a high-injury environment, and choosing to play in one is embracing a significant degree of risk. (And it’s also easier to choose to not play in a bowl game than to completely avoid driving or walking around.)

Swinney’s making a false equivalency here, suggesting that choosing to avoid one football game is like walking around in bubble wrap, and that further illustrates that he doesn’t really have to worry about getting hurt himself, and doesn’t fully understand what that can mean to players who haven’t already signed professional contracts. He also makes a ridiculous argument of “Why not skip your whole senior season?”; to start with, some players already do declare early for the NFL and skip their senior season, but beyond that, there’s a major difference between skipping a whole year (quite important for NFL evaluation) and skipping a bowl (not so much).

But the biggest reason for Swinney and other NCAA coaches to not make these kinds of remarks about players skipping bowls should be pure self-interest. There’s no draft in college football, and you have to convince players to come play for you. Thus, you can build or damage your reputation with prospects with any public comment, and it seems likely that comments bashing players who make a logical move to protect their own economic interests aren’t exactly going to make prospects more enthralled with your school.

Of course, this is a pretty minimal factor compared to everything else involved in picking a school (on-field success, history of NFL picks produced, TV exposure, position coaches, facilities, etc), and it’s not like Swinney’s comments here are suddenly going to drop Clemson way down the recruiting rankings. But with all other things equal, they will likely reflect negatively on him and the school, at least in the eyes of some prospects. And that should be a good indication for Swinney to not go down this road again, and for other coaches not to follow suit. Criticizing players for acting in their own interests goes against the coaches’ own interests in the end, and it falls in the camp of things where it may be better to say nothing at all than what you’re thinking.