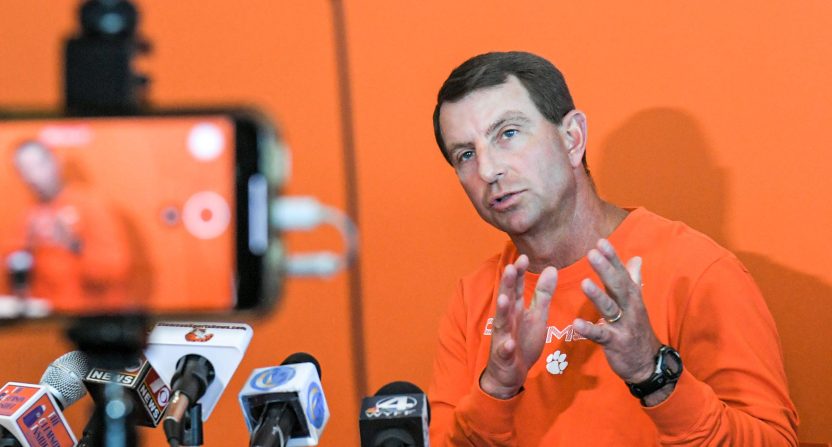 Dabo Swinney is one of the most successful coaches in college football over the last decade. He is not, however, one of its most progressive when it comes to whether or not student-athletes should have autonomy.

Swinney has long made headlines for his comments, whether it be about player compensation, skipping bowl games, manufactured disrespect, or the COVID-19 pandemic.

The Clemson Tigers head coach is making headlines again this week with a fresh round of comments coming out against the notion of paying players their worth and speaking out against the transfer portal and player autonomy, all while raking in millions of dollars as a coach.

“I am against anything that devalues education,” Swinney said, via ESPN. “That’s what I’m against. I am for anything that incentivizes education. People will come after me because I’ve always said that I’m against the professionalism of college athletics, and I am. Kids don’t know what they don’t know. That’s a slippery slope if you professionalize college athletics, and now you’ve got salaries and taxes and you can fire kids on the spot and they’ve got to pay for their tuition and they pay for their housing and everything else.

As far as NIL, Swinney is unsurprisingly not a fan and sees it as a dangerous road for players.

“There’s no rules, no guidance, no nothing,” Swinney said. “It’s out of control. It’s not sustainable. It’s an absolute mess and a train wreck, and the kids are going to be the ones who suffer in the end. There are going to be a lot of kids that end up with no degrees and make decisions based on the wrong things.”

And as for the transfer portal, Swinney is vehemently against the notion of transferring and recruiting transfer (though we’re sure he’ll take a five-star transfer if and when one becomes available).

“My transfer portal is right there in that locker room because if I’m constantly going out every year and adding guys from the transfer portal, I’m telling all those guys in that locker room that I don’t believe in them, that I don’t think they can play,” Swinney said. “We’re also not doing our job as coaches and recruiters if we’re bringing in a bunch of transfers.”

Dabo saved his most tone-deaf comments for player compensation, in which he compared the situation to the difference between the CEO of Delta and baggage handlers, even though baggage handlers earn a salary while college football players do not.

Swinney may or may not have some points, but he’s also firmly out of step with the way the sport and the business of college football are moving. For better or worse, players are getting more autonomy and more power. For someone like Swinney, who wants absolute control over his football program, that’s always going to feel like a bad thing. But that doesn’t actually make it worse. Just different.

As you might imagine, Swinney’s comments generated some interesting responses.

If education is so important, does he find it strange that Clemson has 67 majors, but 50 percent of his roster majors in just three of them (Pre-Business, Communication and Sports Communication)? pic.twitter.com/vOafUuntEl

Does Dabo Swinney view Trevor Lawrence's position while he was at Clemson the same way he views a baggage loader for Delta or am I missing something?

Dabo Swinney literally said in the same interview that his salary is not inflated because the free market should decide… but college athletes shouldn’t be paid to play.https://t.co/oiU12vj2Vx pic.twitter.com/Cm10T84VdM

dabo swinney —a verified dummy— was asked about nil. he responded with this. 2 questions later, he suddenly likes the nil. lol pic.twitter.com/ECegXhuxXJ

It’s incredibly disingenuous for Dabo Swinney to proclaim the problem with paying players is that they could be fired on the spot. First, that obfuscates the reality coaches essentially wield and exercise that power rn. Second, no worker should be subjected to at-will employment. pic.twitter.com/6vNpkvt11P

Swinney signed a 10-year, $93 million contract with Clemson in 2019. A great sign of the free market at work for rewarding a person for their efforts accordingly. Players should be afforded the same ability, no matter what he thinks.