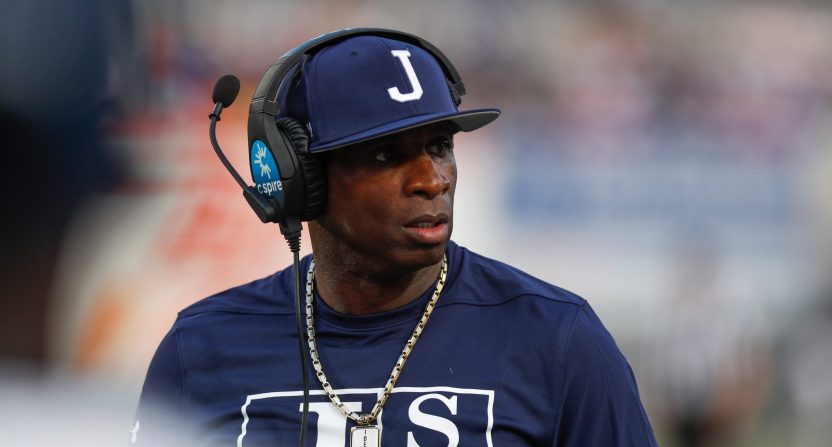 Comments made by Alabama coach Nick Saban regarding the NIL deals of players at Texas A&M and Jackson State have generated immense buzz around the college football world. Aggies coach Jimbo Fisher had a fiery response. Initially, Jackson State coach Deion Sanders promised a reply of his own to what he called a lie from Saban. Now, he has another idea.

Sanders decided not to talk on the issue. Instead, he issued a challenge to Saban to settle it on the field. Saban’s Alabama team against Sanders’ Jackson State team.

Saban hasn’t exactly generated a lot of sympathy for his comments, to a point where even he did some backtracking from them. Nevertheless, college football fans were mostly unsure if Sanders challenging the perennial powerhouse in Alabama was a good idea.

I respect this, but you do not want this https://t.co/P51r8cO7ac

Alabama opens as a 31.5 point favorite against Jackson state on senior day via @BetMGM https://t.co/60AK4hQVny

JSU not built in the trenches right now for bama they couldn’t even block south carolina state https://t.co/gs2P1dh4Or

Though, there would be some benefits for Sanders and the Tigers.

Money move by prime. He know what he doin. https://t.co/hah1kp1xAb

Jackson State would certainly receive a nice payout from the kind of game. So, that is a positive.

From an on-field perspective, this is probably not Sanders’ best idea. While the Tigers had a great season in 2021, they did lose two games against FCS (FKA Division Division I-AA) teams. Going against a powerhouse Alabama program would likely not yield pretty results.

But if Sanders is really serious about this challenge, there’s a good chance that it can happen. From his decades of coaching, we can safely say two things about Saban. One, he knows how to win. Two, he loves scheduling Division I-AA opponents.