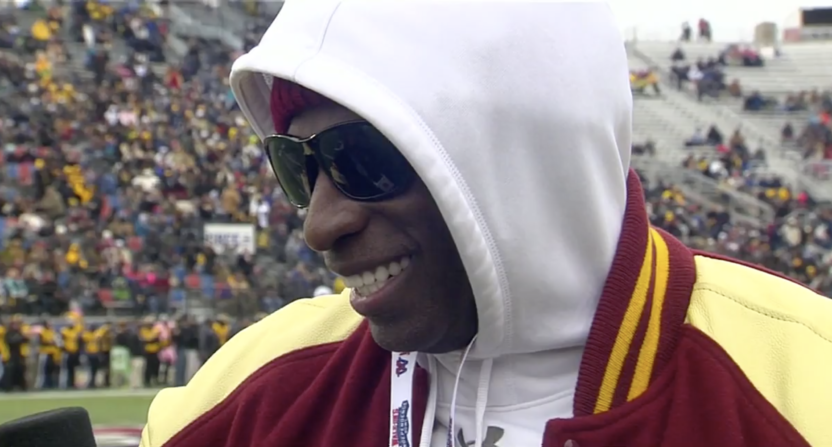 Former Florida State Seminoles football standout Deion Sanders was on the sidelines in Shreveport, Louisiana cheering on his beloved Noles in the Independence Bowl against Southern Miss. During a brief interview on the sideline with ESPN, Sanders shared a quick story about how he once took his former teammate and Southern Miss legend Brett Favre shopping in Atlanta.

Favre spent just one season in Atlanta with the Falcons. Drafted early in the second round by the Falcons, Sanders was already a couple of seasons into his pro career and decided to take the new Falcons player shopping. As Sanders explained, he took Favre shopping in the inner city of Atlanta. I don’t know what kind of clothes Sanders picked out for Favre, but given Sanders’ style at the time, you may also have a difficult time picturing Favre wearing the same kind of attire.

As far as personalities and styles go, you may not find much more of a contrasting pairing than Sanders and Favre. So it may come as no surprise to learn Favre never wore any of the clothes Sanders bought for him on their little shopping spree back in their one year as teammates in Atlanta.

As he closed out his interview on the sideline, Sanders looked into the camera with a message for Favre, who was reportedly sitting in the stadium watching the game in a box that was much warmer than the temperature on the ground. “You, me, Brett!” Sanders said with a smile. While that was all good for a chuckle, Sanders also was asked about a report about his potential interest in a job on the Florida State coaching staff under new head coach Willie Taggart.

According to a report from Noles 247, the Florida State affiliate on the 247 Sports network, Taggart has been in communication with Sanders about a job as defensive backs coach for the Seminoles, and the hall of famer reportedly has interest in the position. How far that interest goes into officially bringing Sanders on the coaching staff remains to be seen, but it is enticing to think about, and Sanders certainly didn’t shut the door on the idea. If anything, he watered the seed that had been planted.

“You never know,” Sanders said. “I’ve been known to make big plays with these colors on. That’s all I’m gonna say.”

Sanders as an assistant coach would certainly be interesting to see, but it would take him out of the TV studio for NFL coverage. Sanders’ passion for FSU has never been in question though, and it could be an interesting gig for him if he chooses to explore the possibility.