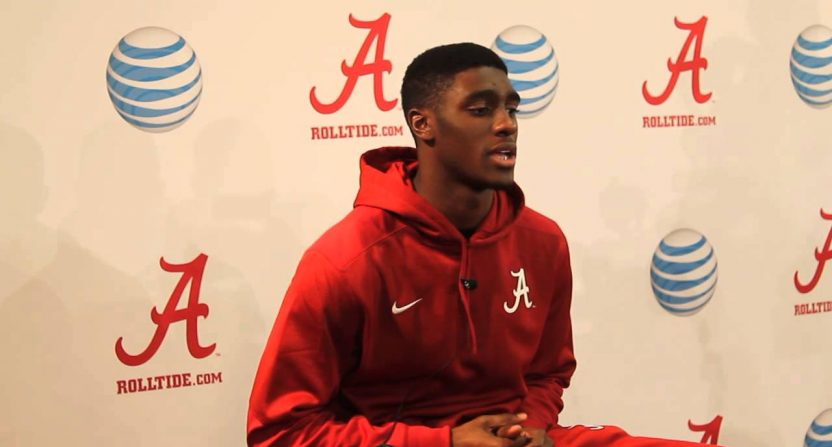 Alabama defensive back Deionte Thompson turned himself into authorities last week after being connected to an alleged spring break beating in Texas. Now, video has reportedly been revealed showing just how involved Thompson was in the incident, and it does nothing to make things better.

The Decatur Daily reports court documents include video of Thompson and another person kicking an 18-year old victim in the head while the victim was determined to be incapacitated on the ground. The victim, reportedly suffered major injuries to his face with a handful of broken bones. The video was supplied to authorities by a female witness, although the witness claimed she was unable to identify the persons in the video. Authorities took care of that. Police identified the one man in the video wearing a white Alabama hat to be Thompson. One witness said a racial slur ignited the altercation.

Thompson has already been released on a $200,000 bond and will face a court appearance at a later date. As for what this means with his status at Alabama, there is no change in the situation just yet.

“We are still in the process of gathering all of the facts in Deionte’s situation,” Alabama head coach Nick Saban said in a statement last Friday, according to College Football Talk. Thompson has not been suspended by the program as of this moment, but he is not expected to play during Alabama’s spring game this weekend. Expect Saban to be faced with questions about Thompson this weekend, which he will surely handle with his usual tension and sternness, but it is a fair question to ask given the recent information that has been reported.

The video has not been shared in the public, but that should not matter. If the video shows Thompson kicking an unconscious man on the ground in the head, Alabama should have no choice but to move on from the backup defensive back.