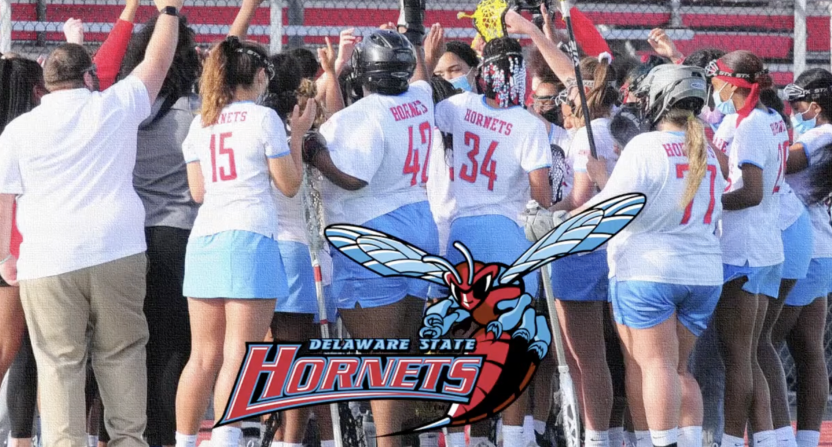 The Delaware State University women’s lacrosse team was returning home on April 20 following their season-ending game against Stetson University when their bus was stopped by police while traveling through Georgia, leading to an incident that the school president has said “incensed” him and the team.

According to DSU’s student publication The Hornet, the bus driver was told that he had been pulled over for improperly traveling in the left lane. However, the police officers then boarded the bus and informed the students that they would be going through their luggage to check for drugs, including marijuana, heroin, and ketamine.

Video taken by DSU player Saniya Craft shows an officer saying, “If there is anything in y’all’s luggage, we’re probably gonna find it, OK? I’m not looking for a little bit of marijuana but I’m pretty sure you guys’ chaperones are probably gonna be disappointed in you if we find any.”

It was not made clear what probable cause the white officers had to search the predominantly Black student-athletes bags. Their search included bringing out a K-9 dog and “tossing underwear and other feminine products, in an attempt to locate narcotics.” The initial number of officers on the scene also grew quickly from two to six.

No drugs or illegal items were found amongst their luggage or on the bus. The driver, who is Black, was not issued a citation for the presumed violation.

An incident occurred in Georgia when the Delaware State University Women’s Lacrosse Team was returning home from a game in Florida. Read a message from President Allen in which, again, he says, “We shall not be moved.” https://t.co/IihQ6yV3pt pic.twitter.com/RBC6jZF5C2

“When I saw the police come on the bus and then accuse us of having narcotics, I was reminded that living as black women in America, you are scrutinized when just trying to live,” Pamella Jenkins, head women’s lacrosse coach at DSU, told The Hornet. “Unfortunately, this is our reality daily and when they go low we must go high. I’m proud of how our team stayed calm and especially proud of Mica Lambert for asking the officer a thought-provoking question. It’s been a stressful few days, but our team handled that tense situation with the utmost class and respect.”

DSU president Tony Allen made a statement to the university community about the incident in a letter on Monday, saying that the school has informed Delaware Gov. John Carney, the state Attorney General’s office, Delaware’s congressional delegation, and the Congressional Black Caucus about the incident.

“They, like me, are incensed,” Allen wrote. “We have also reached out to Georgia Law Enforcement and are exploring options for recourse – legal and otherwise – available to our student-athletes, our coaches, and the university.

“We do not intend to let this or any other incident like it pass idly by. We are prepared to go wherever the evidence leads us. We have video. We have allies. Perhaps more significantly, we have the courage of our convictions.”

“Moments like these should be relegated to part of our country’s complicated history,” Carney said, “but they continue to occur with sad regularity in communities across our country. It’s especially hard when it impacts our own community.”

“No one should be made to feel unsafe or humiliated by law enforcement or any entity who has sworn to protect and serve them,” the statement read. “That’s especially true for students who have sought out HBCUs like Delaware State University with a long history of empowering communities of color that have far too often faced discrimination and other barriers to opportunity.”

Reaction on social media following the report was that of anger, frustration, and a determination to bring more details to the light and hold those who racially profile accountable.

Damn, this story. It just gets more angrifying by the word. https://t.co/HON7sNDPr3

I stand with @DelStateUniv, our fellow Delawareans again racial discrimination. No one including student-athletes and coaches should have to endure this! I am and will continue to be an ally of Delaware State University and their Athletics Department. https://t.co/mhdn7eAFRZ

We are united as allies with @DSUlax against this treatment. There's no room for this in our game or our world. https://t.co/dzzPzaHHdR

This statement from Delaware State's president seethes with conviction and intensity, much needed in these times.

And law enforcement must answer for their employees' search without PC. Again, this is not a few bad apples; the entire tree is diseased. https://t.co/xj9jge07fq

The University of Delaware is greatly disturbed by the recent incident that happened to the DSU women's lacrosse team. The Blue Hens are allies of the Hornets and stand with them and President Tony Allen during this time. https://t.co/UdSsMzMZsL

My heart goes out to the student-athletes, coaches, & staff of @DSUlax who had to endure this prolonged stop & may still be trying to process it. It’s unacceptable and it’s a shame that they had to go through this especially while representing their university. https://t.co/j49IIofVa2

This is crazy. And it adds to the list of worries HBCU presidents already have. As our teams travel the country we have to worry about them riding while Black… https://t.co/4AZxsevECN