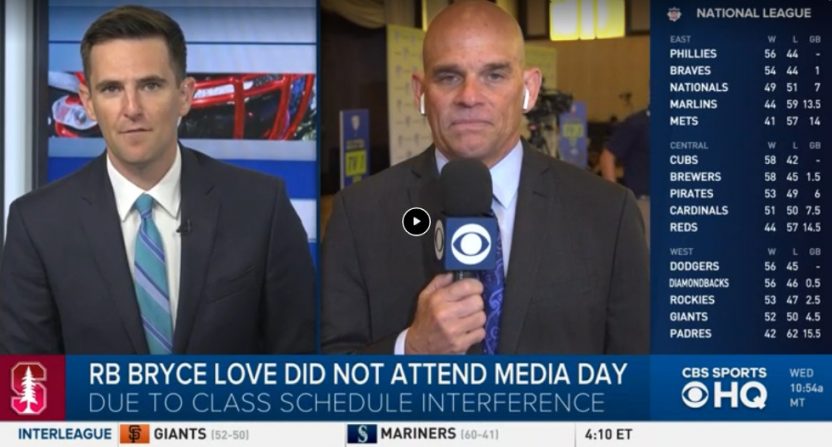 A big part of the argument for not paying college football players is the supposed value of the education they receive. But what about when that education gets in the way of their sport; not even in the way of games, but in the way of…media days? Well, it makes some columnists very angry, and creates some hot takes. Like this one from CBS Sports’ Dennis Dodd, who not only went in on Stanford’s Bryce Love for going to class Wednesday instead of attending the Pac-12’s Media Day in Hollywood  (which Love did even appear at via a video call), but said it would hurt Love’s chances of winning the Heisman Trophy. Some highlights:

There was a hole in the college football universe when the Pac-12’s best player — and perhaps nation’s best as well — was a no show at media day.

Put it this way: Try to envision Tim Tebow in his heyday skipping SEC Media Days of because, well, school. Right or wrong, that wouldn’t have happened. The need to better himself, the conference and his school would have outstripped another summer school lecture.

That’s essentially what kept Love back in Palo Alto.

“Me, personally, I really wanted to be there to represent the university,” Love said. “But I decided I just wasn’t able to make it happen this year. Based on other commitments, trying to graduate in December required me to take more classes over the summer.”

But at Stanford, they don’t necessarily chase trophies. That’s fine. too.

It’s just that we thought we knew ya, Bryce. We wish we knew more.

And there’s video of Dodd going in further from CBS Sports HQ:

Ah, yes, “attending media days” is such a crucial part of the criteria to be selected as college football’s best player. Right up there with the swimsuit competition. And it’s hilarious that Dodd tries to spin this as Love missing an opportunity to “better himself, the conference and his school”; plenty of people are still going to be aware of Love and Stanford whether he speaks to those at the Pac-12 Media Day in person or not. There are plenty of people whose knowledge of football players goes beyond Dodd’s columns! It’s also funny that Dodd asked Pac-12 commissioner Larry Scott about this, and that even Scott talked about how they “tried” to entice Love away from his academic work:

“We tried,” Scott said. “We talked to him, but this was a serious commitment he felt he had to [make]. It’s really hard to criticize that, but that’s what we’re preaching all the time, giving these kids a chance to get an education.”

Yes, it is hard to criticize that. Unless you’re a columnist with the arrogance to go after a player for choosing to further their education instead of talking to you personally, something they’re not paid to do. (Among the many things they’re not paid to do.) And Dodd was rightfully lit up for this on Twitter:

What an indictment of college football: Stanford’s Heisman candidate Bryce Love criticized for attending class instead of media day

NCAA and Pac-12: "We're very deliberate in having 'student' first in the term 'student athlete,' so school comes first and he's literally a student at Stanford."

"This unpaid worker whose only compensation is an education for playing a sport that will certainly diminish his lifespan and health had the audacity to not be at media day which I'm paid to attend and he is not. Be professional, even though you're an amateur" – Dennis Dodd

This is such an awful opinion by Dennis Dodd. You think 3 weeks into the season anyone will care that he skipped media day? Nope.

So, yeah, that’s not the world’s greatest look for Dodd. Or from those who insist on the sanctity of amateurism, and on the tremendous value of the education these athletes supposedly receive. Except for when you’re arguing for them to skip out on education to go talk to a bunch of reporters.