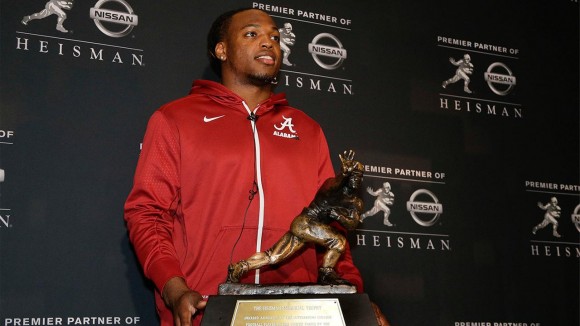 Derrick Henry won on Saturday night in New York. So did the University of Alabama and the SEC.

The relationships connecting these realities are both obvious and historically layered.

Running back Derrick Henry won the 2015 Heisman Memorial Trophy, basking in the glow of college football’s most prestigious individual achievement at the Downtown Athletic Club. On the 80th anniversary of this award — first given in 1935 to Jay Berwanger of the University of Chicago — it was fitting that a player from college football’s most successful program took home the stiff-arm trophy.

One would think that Alabama — with its mountain of national championships and reclaimed supremacy in the sport — would have more than two Heisman winners by now. At the start of the Heisman era, legendary coach Frank Thomas built Alabama into a powerhouse. A continuously dominant program during Bear Bryant’s tenure, Alabama stood at the top of college football for roughly two straight decades with barely any interruption (two transitional seasons). Gene Stallings presided over several highly fruitful seasons in the 1990s. Now, Nick Saban has made Alabama an annual juggernaut… and that’s where the contours of this story come into focus.

From the mid-1920s through the World War II era of college football, the sport played many of its biggest games at Yankee Stadium. Northeastern media centers such as New York were often the featured locations for the biggest games on the calendar. Grantland Rice and other writers with a national reach and reputation created a powerful aura in and around college football, which helped forge the identities of Notre Dame and Army and Michigan and Illinois.

Red Grange, Knute Rockne, the Four Horsemen, Red Blaik, Frank Leahy, Doc Blanchard, Glenn Davis — these and other figures of the time made college football important and resonant on a national scale. College football has always owned a strong regional identity, but its national dimensions were quite pronounced as the 20th century reached its midpoint. What had not yet occurred in America was the great shift of the big urban areas to a mentality much more dominated by professional sports. The surging popularity of baseball in post-World War II New York certainly played a role in accelerating this shift. So did the iconic 1958 NFL Championship Game between the Baltimore Colts and the New York Giants.

As the 1960s ran their course, service-academy football — which had been so nationally relevant in the 1940s and ’50s — began to wane in terms of influence and stature. The Ivy League, formerly at the heart of major college football in the sport’s earliest decades, began a steady downshift to Division I-AA (now FCS) status, cemented in 1982.

The beginning of the second half of the 20th century gave rise to a version of college football which was occasionally visible through the medium of television, but which wasn’t widely accessible the way it is today. The sport truly was regional in character, and it stayed that way for a long time. Not until the Bowl Championship Series in 1998 — the first truly focused attempt to create a national championship system from this regional cloth — did college football bend toward a more national arc. With the arrival of social media and even more television outlets in the middle of the past decade, we have only recently begun to enter a new era in which college football possesses a more coast-to-coast identity.

Most of the Heisman Trophy era has been accompanied by a regional quality in college football, but today, this sport is nationally oriented in ways not seen since the 1940s.

This is where Alabama, Nick Saban, the SEC, and the Heisman Trophy all come together.

This new national age in college football has been dominated by the belief (sometimes rooted in a markedly airtight reality, sometimes the product of nothing more than persistent and inaccurate perception) that the SEC is the best conference in college football. At a time when the pervasiveness of mass media communication is so potent in its ability to communicate messages — often not in specific words, but in terms of constancy or regularity of coverage — the SEC gained supremacy in college football. When Alabama, the SEC’s signature program and (according to many measurements) the best program of all time, regained its place atop the heap, the Crimson Tide and their foremost stars stood to benefit in Heisman Trophy races.

How fitting it is that Henry’s 2015 Heisman win calls to mind the previous Heisman winner from the Capstone: Mark Ingram in 2009.

That 2009 season — it is not an idle coincidence, folks — was Saban’s first SEC championship and national championship season at Alabama. It marked the beginning of The Hound’s dynastic run as the head coach in Tuscaloosa, Bear Bryant’s most accomplished successor.

Alabama’s return to the mountaintop — in a time of SEC hegemony — propelled Ingram to a narrow win over another Stanford running back in 2009. No, that Stanford star was not Christian McCaffrey — whom Derrick Henry defeated in 2015 — but Toby Gerhart, a close second-place finisher six years ago. Toby was the unluckiest Gerhart since the clan on season two of Fargo.

Ingram was a fine back, a wonderfully dependable and workmanlike back who stood at the center of his team’s success, especially since the Tide’s passing game was not all that formidable. Ingram certainly deserved to be a Heisman finalist and one of the four best players in the country. Yet, his body of work was not spectacular. His offense did not play well in a narrow and low-scoring home win against Tennessee.

Does any of this sound familiar? It should — these traits and occurrences also existed in the 2015 Alabama season. They can also be applied to Henry’s body of work, so similar to what Ingram forged.

In many ways, Ingram’s Heisman was built on the reality that no other candidate firmly grasped the award with two hands and left no doubt about the outcome. In 2009, Colt McCoy threw 12 interceptions for Texas, diminishing to a certain extent all the huge game-breaking plays he made for the Longhorns, en route to the BCS National Championship Game against Alabama. This year, Deshaun Watson of Clemson filled that role, throwing 11 picks but carrying the Tigers through big game after big game in the second half of the season.

The Stanford running backs gained more yards. The quarterbacks in the race made more big plays.

Being on Alabama, though — being coached by Nick Saban in the SEC in this new national age of college football — won the day. Being on the right team in the right conference under the right coach, with the sport more visible than it’s ever been, made the difference for Mark Ingram in 2009.

It made the difference for Derrick Henry in 2015.

Henry certainly deserves the trophy named after John W. Heisman. It would be uncharitable and wrong to insist otherwise.

One can only note, though, that if Henry and Ingram played for Stanford — and both Gerhart and McCaffrey played for Alabama — with the stats remaining what they were for all players involved, the 2009 and 2015 Heisman Trophy recipients would have had different last names.

The conference and school winners would have remained the same.