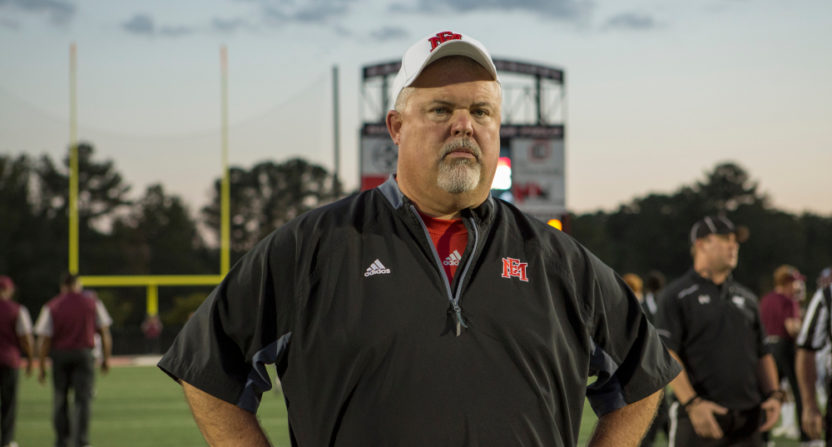 Providing access to filmmakers can raise plenty of concerns for coaches, and we saw some of that in the second season of Netflix’s Last Chance U (out now). After seeing the response to and the popularity of the first season, East Mississippi Community College head coach Buddy Stephens and his players seemed both more aware of the cameras and occasionally more resistant to them in the second go-round. Director Greg Whiteley told our Alex Putterman that tension was expected, but there were times this year where Stephens in particular was very unhappy with the cameras recording him. However, Stephens told Chris Korman of For The Win that he wants the documentary season to return to EMCC for a third season despite that:

Throughout Season 2 Stephens is clearly frustrated with the cameras and he admitted that it was more difficult to ignore them during the second year of filming. The crew would flock to him at the earliest sign of a meltdown, which often hastened the meltdown. He called it the most stressful season of his career.

Still, he’d like the cameras to come back. He wondered whether the country wouldn’t be let down to not be able to follow his team again next year.

Stephens says his 2017 squad will be the fastest he’s ever had — recall that he’s won three national titles — and also believes the team’s new academic advisor, Abby Jenkins, would be a compelling character.

“There would be so much to show,” he said. “She’s doing the same thing as Brittany but she does it her way. Brittany was not the first person to love the kids, not the first person to walk a kid to class. That’s just the thing: she had her way of doing it, and now she’s moved on. She went to another job but she’s already left that and is trying something else. Abby does it differently. She’s a little bit more hardcore. That would be interesting to watch.”

It’s notable that Stephens is still advocating for the documentary to return to EMCC, despite his occasional frustrations with the cameras and despite him not always being thrilled with how he’s portrayed. It makes some sense for him, of course, especially as a recruiter; Last Chance U provides the Lions with an incredible amount of national and international exposure for a junior college program. But it’s not certain this will happen again; Whiteley told Korman “We’ve talked about going to a different school” for Season 3. It will be interesting to see what they decide.

[For The Win; photo from Steve Dietl/Netflix.]

6 thoughts on “Despite frustration with cameras, ‘Last Chance U’ HC Buddy Stephens wants a third season”