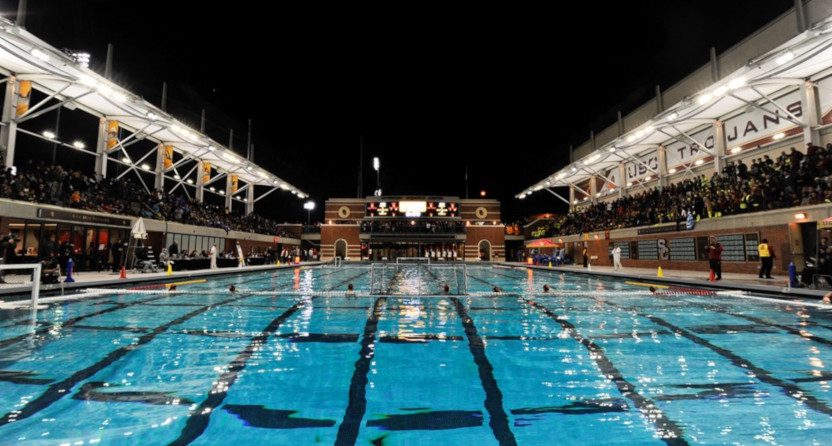 The fallout from the college admissions scandal continues, and it’s now produced a second jail sentence. Actress Felicity Huffman was sentenced to 14 days in prison earlier this month for paying $15,000 to boost her daughter’s SAT scores, and Devin Sloane, the founder and CEO of Los Angeles-based water and wastewater company waterTALENT, was sentenced to four months in jail Tuesday. As per CNN’s Eric Levenson, that comes following a guilty plea to conspiracy fraud charges back in May, and the sentence also includes 500 hours of community service and a $95,000 fine.

So, what exactly happened here? Well, the indictment (available from the Department of Justice as a PDF here) states that Sloane paid a total of $250,000 ($200,000 to scandal mastermind Rick Singer through a fake charity, $50,000 to then-USC senior associate athletic director Donna Heinel) to get his son into USC as a water polo recruit, a process that included staging water polo photos. And the description of that in the indictment is really quite something.

Thereafter, on or about June 26, 2017, SLOANE received an e-mail from a graphic designer bearing the subject line, “Water Polo Photo – 06/26/17.” The designer wrote: We researched a few water polo athlete images and the majority are cropped against a background so they can use them in promotional materials (and it takes out undesirable elements from the crowd etc). We were able to adjust the color and complete a clean extraction to mimic this look (attached).

SLOANE responded, “OK, but any chance to put him in a setting that looks like an outdoor [polo] pool?” The graphic designer replied:
We looked for a few shots yesterday but could not find one that was a solid fit (we’re looking within istockphoto for the pool BG scene). We’ll keep looking and should have a few final examples today.

On or about June 27, 2017, SLOANE e-mailed CW-1 a photograph of his son purporting to play water polo, with his right arm and upper torso exposed above the water line. In the e-mail, SLOANE asked, “Does this work??” CW-1 responded: “Yes but a little high out of the water- no one gets that high.”

On or about the following day, June 28, 2017, SLOANE sent CW-1 a photograph in which his son appeared to be lower in the water, with his torso and arm now mostly submerged. SLOANE wrote, “Hope this works . . .” CW-1 replied, “perfect.” In both photographs, SLOANE’s son appears to be using the items SLOANE purchased from Amazon.com a few weeks earlier.

It’s always bad when the prosecutors have receipts, literally in this case. And this also led to Singer (who’s CW-1 there) e-mailing Janke to create a fake profile for Sloane’s son, which included that he was a “perimeter player” who played for the “Italian Junior National Team” and the “LA Water Polo” team. And interestingly, Janke wasn’t even a water polo coach. She was an assistant women’s soccer coach who only worked at USC until 2014, but even after that, she was involved in creating fake profiles for a whole lot of “athletes,” including Lori Loughlin’s daughters Olivia Jade and Isabella Rose.

Janke pled guilty to conspiracy to commit racketeering in May, and admitted involvement in this scheme from 2012-19. She also worked on that with former USC women’s soccer coach Ali Khosroshahin (the USC women’s soccer head coach from 2007-13), who pled guilty to conspiracy to commit racketeering in June. Meanwhile, famed USC water polo coach Jovan Vavic has also been accused of involvement in this scheme, and he was fired by the school in March. Vavic has pled not guilty to rackeetering charges, but there’s some seemingly damning evidence against him; as SI’s Tim Rowan wrote in March, that includes Vavic talking up some of his team’s fake recruits.

Vavic could be convincing, too. In one case, he emailed a USC athletics administrator that one of these fake recruits “would be the fastest player on our team,” and that he could swim 50 yards in 20 seconds—two seconds quicker than his fastest players. “This kid can fly,” Vavic wrote. It was a total fabrication. USC admitted the boy just two days later.

It’s unclear whether his fake recruits ever saw the pool or where the money paid on their behalf—the going rate appeared to be between $220,000 and $250,000—ended up. Singer allegedly made private school tuition payments for Vavic’s children. But Singer also told a parent, in a wiretapped conversation, that he believed Vavic usually used the money to “subsidize” the salaries of his assistant coaches, who did so much to keep his dynasty going. (None of Vavic’s assistants have been charged.)

In Sloane’s case, at least, the scheme worked in terms of getting his son into the school. The fake profile was presented to the USC subcommittee for athletic admissions in November 2017, and Sloane’s son got in. But Sloane was caught when the scheme started to unravel, and that led to his eventual teary court appearance Tuesday, as NPR’s Tanya Ballard Brown writes:

“There are no words to justify my behavior, nor will I offer any excuses or justification,” Sloane said Tuesday, tearing up in court. “The crime I committed is unacceptable. In my heart and my soul, I want what’s best for my son. I realize now my actions were the antithesis of that.”

Meanwhile, prosecutor Eric Rosen had quite the cutting remark about Sloane.

“Prison is necessary here as a great leveler between rich and poor,” Rosen told the court.

…Rosen said Sloane used his dead mother as a prop for a fake donation and expressed outrage when high school counselors questioned why his son, who did not play water polo, was being recruited to play college water polo. Sloane’s participation in the college bribery scheme, Rosen said, did not end “at the edges of his family’s infinity pool.”

Ouch. It should be noted that this is just the second sentencing in this case, and that 52 people have been charged so far (including 35 parents). So Sloane’s far from alone here. But his actions have led to some pretty significant consequences.