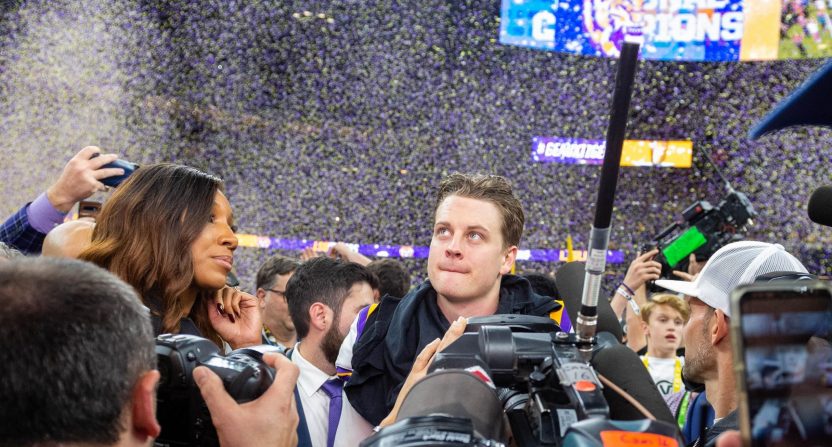 The football world is littered with what-ifs based on a multitude of decisions that coaches and players make every day. A recruit chooses one school or another. A player decides to transfer to find playing time elsewhere. A coach leaves one school for a better opportunity at a bigger school. Or that same coach decides to stay at their current school instead. There are millions of these decisions across college football and the NFL that we can spend all day discussing and arguing over.

Listening to Bear from ESPN College Game Day on the Stanford Steve podcast. Bear told a story that Joe Burrow was set to go to Tennessee with Greg Schiano. Schiano was told he had the job and when Tennessee and the Clay Travis mob blew it up, Joe decided go go to LSU.

Here’s a new one for you. Joe Burrow almost transferred to Tennessee instead of LSU. That is, according to Michael Lombardi, who first mentioned the story on his podcast, The GM Shuffle with Michael Lombardi and Adnan Virk, back on October 7. It wasn’t until a mention by Chris ‘The Bear’ Fallica this week that the rumor caught attention on social media.

The nugget was initially dropped during a discussion about Jacksonville Jaguars head coach Urban Meyer and how he looked at certain players while at Ohio State. Burrow spent three years at OSU before transferring when it became clear that Meyer was going to install Dwayne Haskins as the starter.

“There’s a great story. This is true,” said Lombardi. “Urban was all about five stars at Ohio State. And he loves Haskins. He loved Haskins. And he never gave Joe Burrow a chance at Ohio State. Never. Never. Joe Burrow was a three-star athlete [and Urban] never thought he was good enough. In fact, it was so bad, there was a scrimmage that Joe Burrow didn’t wear a red shirt. They were live on Joe Burrow. And so with Joe Burrow, he didn’t say s***. He kept his mouth shut… He was gonna go to Tennessee when [Greg] Schiano was gonna get the job there until social media blew that up. And then he went to LSU.”

All Burrow did when he transferred to LSU was guide the Tigers to a national title, win just about every major award a quarterback can win, including the Heisman Trophy, and then go on to be the No. 1 pick in the 2020 NFL Draft.

Tennessee, meanwhile, has remained mired in the middle of the SEC pack. As Lombardi alluded to, the school was ready to hire then-Ohio State coordinator Schiano as their new coach in 2017 before some Tennessee fans began expressing displeasure and outrage related to Schiano’s role in the Jerry Sandusky scandal at Penn State. The deal between the two sides fell apart within days and the school hired Jeremy Pruitt.

So, how much faith do we put in this what-if? It’s worth noting that Lombard and Schiano have some history tied around Bill Belichick and the Patriots and Lombardi has long been a very public proponent of his fellow Jersey guy. So this might be something that Schiano had told him in passing but perhaps isn’t ironclad as it sounds.

Also, some have pointed out that the timing doesn’t quite make add up. Schiano and Tennessee’s dust-up happened in December while Burrow made his decision to transfer the following May. Of course, you could say that Burrow had told Schiano he’d follow him to Tennessee beforehand but that assumes Burrow knew he wasn’t going to win the Ohio State starting job the next season, which doesn’t appear to be the case.

Is it possible there’s some grey area in here where Burrow threw it out there as a possibility but it got turned into more of a concrete notion through a game of telephone? That definitely seems possible. Of course, we’ll probably never know just how close this came to happening, but given the success that Burrow had at LSU and the success Schiano appears set to have once more back at Rutgers, it makes for one hell of a “what-if” to discuss on message boards.

[The GM Shuffle with Michael Lombardi and Adnan Virk]