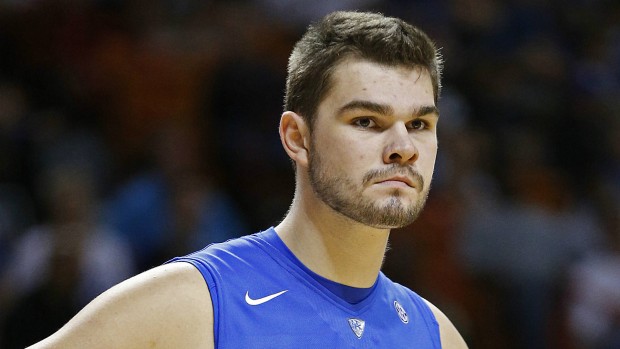 Life is full of inconvenient and competing truths. The Kentucky Wildcats and their fans need to realize as much after a luckless overtime loss to the Texas A&M Aggies on Saturday evening.

Let’s dispense with a preamble and immediately show you what happened in the final seconds of the overtime period between Big Blue and A&M. A bizarre turn of events lifted the Aggies to a 79-77 win which arrests their freefall and simultaneously pushes Kentucky out of a protected (top-4) seed for the upcoming NCAA Tournament.

Kentucky, leading 76-75, had just produced a defensive stop with 9.4 seconds left in overtime. The Wildcats had just been fouled and were starting to walk to the other end of the floor to shoot free throws.

Then this happened, as seen from two different angles:

Why do ANYTHING with the ball in that situation?

2) From the side of the court:

A technical was called on the man who spiked the ball in a diagonal direction, Kentucky’s Isaac Humphries. Instead of being able to take a three-point lead with two foul shots, Kentucky watched A&M take and make two technical foul shots for a 77-76 lead. Kentucky split one of its two foul shots at the other end. A&M got the ball for the last possession of the overtime period and did this:

Texas A&M at the buzzer to beat Kentucky in OT. https://t.co/v2xXWytaEf

Blowback from Kentucky-based commentators was, as one could well imagine, immediate and forceful:

This is where inconvenient and competing truths enter the picture. Thus begins a discussion of this technical, and whether the officials did their jobs or not.

First off, no, Humphries did not show up a Texas A&M player. He was trying to celebrate a favorable result and his role in bringing it about. In terms of intent, Humphries was innocent. He just wanted to give expression to wholesome, healthy emotions. In terms of the spirit of the law, Kentucky fans — and any commentator who thinks that’s an unfortunate way for a game to be decided — are right. That’s entirely fair to say.

What’s murky and uncomfortable is for Kentucky-based analysts to claim that the referees lost their minds and did something ridiculous, far beyond the bounds of what sensible, reasonable officiating should allow.

That’s a little extreme, to put it mildly.

Officials look for clues, details which enable them to make simple distinctions between honest self-expression and inappropriate action.

What aspect of a player’s actions — more than anything else — is used as a guideline for making an instant, on-the-spot determination of whether conduct is reasonable or unacceptable? Very simply, it’s whether the player keeps his actions contained to himself.

We’ve probably all slammed a basketball to the floor — with one hand or two — after making a big play, whether on the playground or in the gymnasium. We look down at the floor during this power dribble or some similarly celebratory act. We don’t spike the ball diagonally, in the direction of any other player. Keeping the act contained to ourselves and our own spot on the floor ensures that a referee (if there is one) can never interpret our actions as being provocative, incendiary, or otherwise.

Yes, Isaac Humphries meant no harm with his celebration. We can see that with the benefit of replay and an awareness of how crestfallen he was after the game. However, while acknowledging that Humphries was innocent in terms of intent, he was guilty of improperly executing his celebration. The ball traveled diagonally, in the direction of other players.

Any ref, with years of training under his belt, might have inwardly thought, “Why would Humphries do that? He just made a good play! Why would he be angry at an opposing player?” Yet, anyone who’s been an official knows that players make mistakes. The ref can’t wonder why a player loses his head; the official has to simply make the call in accordance with the player’s actions.

To put a finer point on all this, it is not the ref’s job to conduct a three-minute investigation into a player’s intent. The player’s immediate action in a contained playing space determines if he’s acting inwardly (i.e., appropriately) or outwardly (i.e., inappropriately). Humphries meant to celebrate inwardly, but when the ball traveled diagonally, outside his own spot on the court, he allowed the refs — quite understandably — to call a technical.

In the clip above from Clippit TV, you can see that Humphries reacted to the technical with the body language of someone who knew he screwed up. After the game, Humphries — not trying to walk away from or protest the idea that he erred — simply owned his gaffe, to his immense credit:

I will learn from this #BBN

We all rip officials when they make completely unacceptable calls, especially calls that unfairly decide outcomes. The Boise State-Colorado State call was one such example.

This, however, was an example of a debatable call — if the refs hadn’t made it, no one would have had much of a problem with it, given Isaac Humphries’ lack of harmful or combative intent. However, the fact that the call was made doesn’t make it unacceptable. It’s debatable, yes, but it’s also well within reason.

Let’s get one thing straight: This was not a case of officiating malpractice. A player allowed an officiating crew to make a call. By not doing anything with the basketball, or by doing something a lot less demonstrative (and less diagonal) with the ball, Humphries would have avoided any and all problems, and Kentucky would have won.

Which person knows — more than anyone else — that the officials should not be faulted for their call and Kentucky’s loss?

That’s what should put this matter to rest, more than anything else.