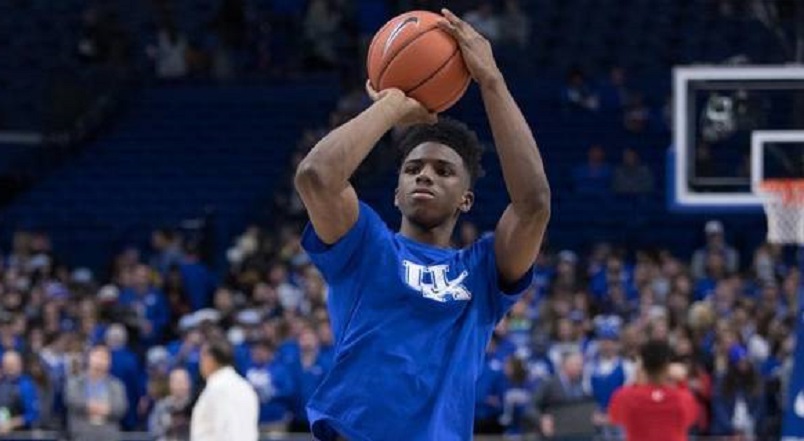 College basketball is marvelous entertainment. It thrives — sometimes in spite of the people running it. Scandals, transfers, sham amateurism. None of these things have made a significant impact on the sport’s popularity. You can make an argument that it’s never been more popular. Virtually bulletproof and beloved.

Diallo is the NBA Draft’s Mystery Man. A guy who many have never heard of could be a first-round pick. Here’s a refresher: Diallo enrolled mid-year at the University of Kentucky but never played. The 18-year-old guard declared for the NBA because, well, why not. There’s no downside to at least going through the workouts. Apparently, Diallo has been so impressive that he might even sneak into the lottery.

Wait, what? How can a guy who hasn’t played competitive basketball in five months become a serious prospect? It could happen. Diallo hasn’t hired an agent and could pull out of the draft to return to Kentucky by the June 12 deadline. He’s smartly keeping his options open. Just another player taking advantage of the rules.

“I have good advisors. People in my corner advised me not to, and those are people that I trust,” Diallo told SEC Country. “(Kentucky coach John Calipari) is a person that I really trust in my life. He’s been through this process more than probably anybody that I know. So him telling me what he thinks is definitely going to be good for my ears.”

Hamidou Diallo shows off his 44.5-inch vertical at the @NBADraft #NBACombine!

Since Calipari took over Kentucky in 2009, the coach has taken advantage of the NBA age-limit rules to send 18 one-and-done players to the pros. Diallo would be his second none-and-done, joining center Enes Kanter. Kanter’s situation, however, was slightly different. He would have played as a freshman if he had not been ruled ineligible by the NCAA. Despite not playing for a year, Kanter, a 6-foot-11 center, was the third overall pick of the 2011 draft.

Calipari told ESPN what he thinks of think about all this.

“Hami, he practiced with us. The last guy to do that was Enes Kanter. He practiced for the year and he was the fourth pick in the draft. Hami practiced four months. If he’s a lottery pick, I’m retiring, I’m done. There’s nothing more I can do.”

The situation with Diallo is making some speculate that this could be the start of a trend — a way to circumvent the NBA rules.

Diallo’s move won’t be a game-changer any more than Brandon Jennings. Remember Brandon Jennings? He skipped college by going from high school to Europe in 2008. It worked out for Jennings who became a lottery pick after one season of playing in Italy. Jennings was hailed as someone who would blaze a trail for a new generation of young hoopsters. He earned money — $1.2 million in salary and endorsements — instead of being part of the unjust and uncompensated system of college basketball.

But since then, how few college players have followed Jennings’ path? Emmanuel Mudiay and Jeremy Tyler are the most notable. Latavious Williams became the first high school to go directly into the D-League. None of those players have sparked a revolution. Neither will Diallo. Fairly or not, college basketball remains the best farm system for aspiring professional basketball players. And no matter if a few players go overseas, go to the D-League, that’s not going to make a dent in college basketball’s popularity.

Did you see the ratings from this past season’s NCAA Tournament? In an age when fewer people are watching live sporting events, college basketball’s postseason ratings were huge. In college basketball – and college football – the schools matter and the coaches matter. The players? They come and go. As Jerry Seinfeld put it, we’re rooting for laundry. Not one Kentucky fan will decide not to go to games or watch the Wildcats on TV because a player decided not to play for their university.

Sure, coaches want the best players because having the most talent increases your chances of winning. Guys like Calipari will take in a Diallo because they can afford to take the risk. Kentucky’s roster is annually stocked with talent. If a player can play, that’s great. If he can’t, that’s fine too. Without Diallo, Kentucky reached the Elite Eight and came ever-so-close to beating eventual national champion North Carolina. Could Diallo made a difference between an Elite Eight and a national title? That’s tough to say.

Players are competing for the millions of NBA dollars. College basketball is one way to hone your skills and stand out. Lonzo Ball became Lonzo Ball thanks in part to the platform that UCLA provided him. De’Aaron Fox and Malik Monk each emerged as potential franchise-altering players thanks to what they did at Kentucky.

Even if there is a depletion of the elite talent, fans will still watch their schools compete in the NCAA Tournament. Tickets will be bought. Jerseys will be sold. The strength of the game has reached a level that everyone just wants to be entertained.

The future of college basketball is bright. That’s a certainty. Diallo’s future? That’s cloudy. Draft Express projects that he’ll be selected 35th overall. That would make him a second-round pick, meaning that he likely would not have a guaranteed contract. Yes, Diallo’s physical attributes are impressive. He has a 44-inch vertical and a 6-11 wingspan. But that doesn’t answer the most important question.

Can Diallo play in the NBA? He has worked out for the Chicago Bulls, Milwaukee Bucks and the Brooklyn Nets. Regardless of where he lands, he might have to start his pro career in the D-League. Diallo isn’t a game-changer. He’s a gamble. And college basketball will be just fine even if others follow Diallo’s path.