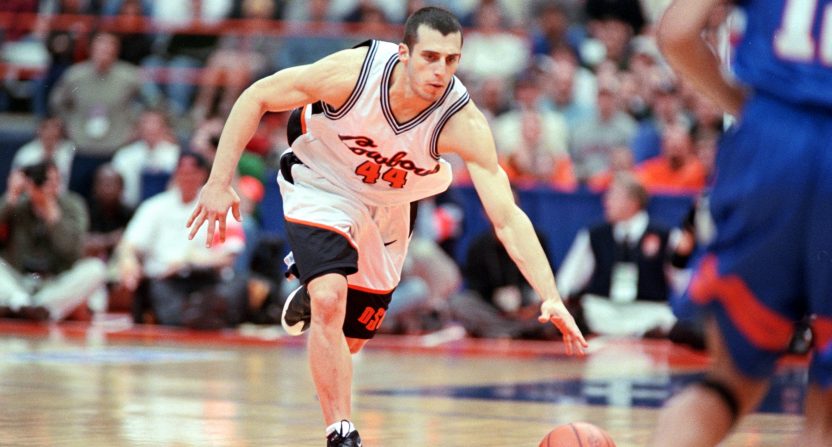 I laughed pretty hard when I saw Twittersphere rumors that Doug Gottlieb could wind up being Oklahoma State’s next coach. I laughed even harder when I saw Jeff Goodman’s report that Oklahoma State will actually interview Gottlieb for the position Thursday.

Once the laughing subsided, I realized that maybe Gottlieb’s candidacy in Stillwater is not so ridiculous after all. (Although it’s still ridiculous that he may leave his job at Fox Sports one day after joining the network.)

Gottlieb doesn’t have any coaching experience, but he’s the son of a coach who’s shown a sharp mind as a college hoops analyst for the last 15 years.

He resurrected his playing career at Oklahoma State after getting bounced from Notre Dame for credit card theft as a freshman. (His Wikipedia page will tell you the issue was drug problems, but that’s not true.) In three years with the Cowboys, he racked up nearly 800 dimes to become the program’s all-time assists leader.

In the past, Gottlieb has expressed interest in coaching Oklahoma State, and prominent figures such as Eddie Sutton, who coached Gottlieb with the Cowboys, supported him for the job. But this is the first time we’re actually seeing the athletic department take notice.

“Most players who are any good, and if they’ve played in a good coaching situation, they can coach,” Eddie Sutton said. “I would have no problem in supporting (Doug Gottlieb). I think Sean would feel the same way.

From Oklahoma State’s perspective, you can understand why they would be interested in a candidate like Gottlieb, even if he’s under-qualified. If Gottlieb had success there, he might leave for a better job. But there’s also a good chance he’d want to stay no matter how much he wins, because he’s an alum who has always been very popular within the program.

Now look at Oklahoma State’s other recent hires. After Sutton retired, the Cowboys went to his son Sean Sutton, who had been an assistant in Stillwater for over a decade. Sean resigned after two seasons of missing the NCAA Tournament.

So Oklahoma State hired Travis Ford, a hot young coach who took little Eastern Kentucky to its first NCAA Tournament in 26 years and then gave Massachusetts its first taste of success since John Calipari’s players trickled out about 10 years prior.

Ford made five NCAA Tournaments in eight seasons but got out of the first round just once, and that was in his first season.

So the Pokes lured Brad Underwood away from his mini-dynasty at Stephen F. Austin! Things were finally looking bright after Underwood pulled a magic act to bring Oklahoma State from 0-6 in the Big 12 to 9-9, easing into the NCAA Tournament.

Then he jumped for the opening at Illinois after one year.

So why not take a shot interviewing Gottlieb? Oklahoma State is an average job in arguably college basketball’s best conference. And according to Gary Parrish of CBS Sports, Underwood “was vastly underpaid” there.

In all likelihood, an established coach with high-major success wouldn’t give the position more than a glance. And another hot mid-major coach would likely follow the path of either Ford or Underwood, meaning flame out or move on to greener pastures once the opportunity arrives.

If athletic director Mike Holder sees legitimate potential in Gottlieb as a coach and gives him to build a perennial NCAA Tournament program, even if Gottlieb is never good enough to win titles at Oklahoma State, he could be the last basketball hire Holder has to make for a long time.