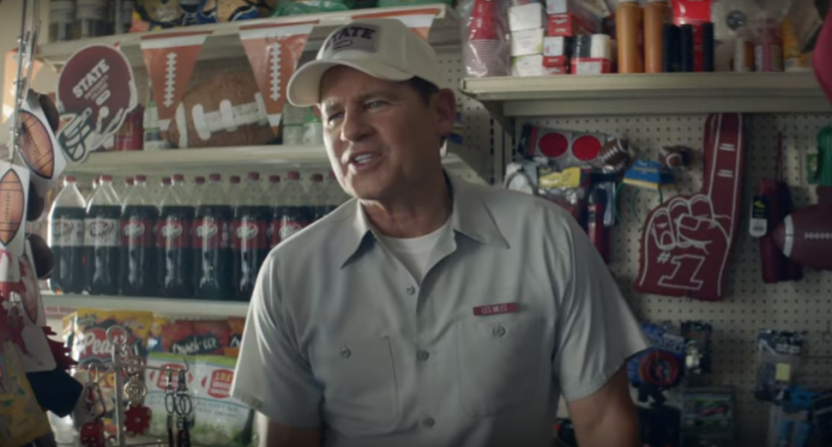 Back in May, it came out that College Football Playoff sponsor and regular college football advertiser Dr. Pepper was moving on from their commercials featuring “Larry Culpepper,” the Dr. Pepper vendor (played by Jim Connor) who claimed to have invented the playoff. We now know what concept they’ll be replacing Culpepper with; a season-long series of six commercials set in “the ultimate college football town – Fansville,” culminating with a “season finale” during the national championship. These spots will feature people supporting fictional teams “State” and “Tech,” and will include famed college football figures like Brian Bosworth as the sheriff, Eddie George as the doctor, and Les Miles as a store clerk. Here’s the “official trailer”:

And more from their release:

Dr Pepper is the fuel for college football fandom, and its new marketing campaign for the 2018-2019 season – Fansville – is a parody TV show drama that captures the emotional rollercoaster of college football fandom. The episodic-like campaign, created by Deutsch, tells the stories of passionate fans in a fun and humorous way through recognizable characters such as Brian Bosworth, Eddie George and Les Miles. Dr Pepper premieres the first of its six 30-second campaign spots on Monday, August 27, with others airing throughout the college football season on ESPN, CBS and FOX.

“Fansville further solidifies our longstanding commitment to college football, as we eagerly kick off the 2018-2019 season,” said Derek Dabrowski, Vice President of Dr Pepper Brand Marketing at Keurig Dr Pepper. “Fansville is where college football is 24/7, 365 – and Dr Pepper is fueling that incredible fandom, the fans’ hope, rivalry and competition, every step of the way.”

Directed by 10-time Emmy Award nominee Jonathan Krisel, the series celebrates the unpredictable highs and lows of college football fandom, and the dramatic twists and turns of the season. In Fansville, where college football and Dr Pepper are tantamount, people will say and do anything to prove their fandom. Whether a surprising twist or a whodunnit cliffhanger, each installment of Fansville builds anticipation for the next. Additional plots will be presented exclusively on digital and social media.

…“I’ve taken on many roles throughout my career and I’m pleased to add Fansville ‘Sheriff’ to my resume,” said Bosworth. “It’s an honor to be associated with a great brand such as Dr Pepper. They’ve done a great job capturing the passion of college football fans. I think fans will really enjoy these new spots.”

Dabrowski also told E.J. Schultz of Ad Age the decision to move on from the Culpepper character was more about wanting to try something new than about any unhappiness with how those spots were performing:

“With anything you will find the lovers and the haters so I don’t think we had any indication it was swaying in one direction or another,” says Dabrowski. From a business perspective, he says the campaign “performed phenomenally for us,” but the brand wants to paint a “new narrative to our commitment to football.”

And Deutsch’s Brett Craig had more to say to Schultz about the “season” approach:

“A football season is lot like a drama that plays out,” says Brett Craig, VP and executive creative director at Deutsch. “It has highs and lows and a season-long story arc to it. It has episodes with audiences tuning in each week for each game and it culminates in a season finale with a championship game— kind of like a TV drama.”

We’ll see how fans respond and how this campaign works out for Dr. Pepper, but it’s certainly a different and interesting approach. And bringing in the likes of Bosworth, George and Miles says a fair bit about how much they’re investing in this.