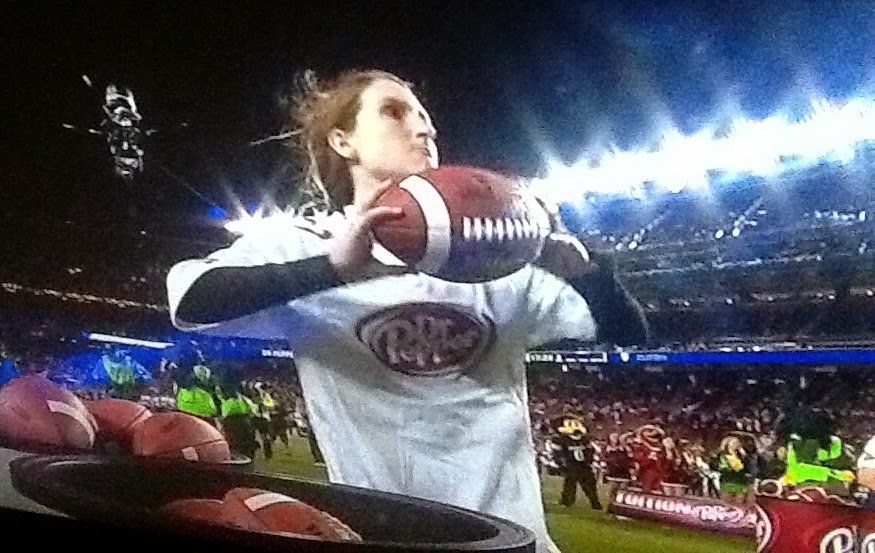 Although it’s been around for many years, I’ve become increasingly more annoyed with Dr. Pepper’s halftime tuition giveaway contest. I love they are giving scholarship money, as I’m all for anything to help advancing young people’s education and weening them off of Ramen noodles and Natural Light. And although I’m complaining, I think any on field sporting activity at halftime is usually better than the 80% of everything else going on at halftime (dogs chasing frisbees, out of shape clumsy people kicking field goals, young kids playing football, punt pass and kick contests > Mark May, commercials and musical acts).

All that said, Dr. Pepper’s current halftime format is really dumb, as it has somehow become a hybrid of different bar and arcade games (the football throw into holes, and the basketball shooting into the hoop).

In past iterations of the contest, participants were given 30 seconds for 10 throws. Notice the “Throw For Scholarship Dough” in the rules explanation above. And look below. They’re throwing the football. They even have time to move to the left after picking up each ball from misaligned bins and are doing real throws. The kid on the right is almost doing half of a bootleg left just to get lined up because has has the time to do so.

But somewhere along the way, Dr. Pepper decided a mad rush of throws made sense. In fact the official rules now stipulate the amount of throws can be as high as 30!  How is anyone’s cannon going to be loose for 30 throws without any warmup throws! Pretty sure 9 out of 10 PE teachers agree this is a bad idea.

So this leads us to chaos. It’s like watching people in those clear glass chambers blowing money in a vortex trying to stuff as much in their pants as possible.

Chest passes?  I mean we all have fond memories of going in the backyard with dad and chest passing footballs right? It’s an American tradition!

This has become more of ‘who can grab footballs quicker and chest pass them five measly yards with a nominal amount of accuracy’ contest.  Our own Alex Putterman offered up this critique of the contest:

“These kids’ education depends on their ability to throw a football incorrectly through a giant sponsored hole.” Hundreds of thousands of dollars are on the line for this.

But what if some brave soul said “No. I throw Dilfer Dimes all day in my intramural league. I’m gripping it and ripping it like quarterbacks do in Wrangler Jeans commercials.” Alex, below, is a throwback similar to baseball players who don’t wear batting gloves, the NHL guys who refused to snap on visors, and the NFL players with the one or two bar helmets. And look at him….he’s great! If Florida had him yesterday they probably beat Bama and we would have the playoff chaos we all wanted. Smooth motion, and 13-for-19 is pretty solid. That’s 9 extra throws than the original rules of yesteryear.

And despite Alex flinging it with a quick release and solid accuracy, he’s crushed by Wesley, who chest passed his way to a 100k scholarship with 19 makes out of 22 attempts. A better % and three more attempts is good for 100k in scholarship money opposed to Alex’s 5k. You think you had a bad day because USC  blew your three team parlay for $50? Alex here just lost 95k of scholarship money because he didn’t feel like chest passing a football, because you know that’s not an actual thing people ever really do in life, so who can really blame him? That said, YouTube offers quite an extensive offering of these videos, to potentially sway one to adopt the chest pass strategy. (That isn’t helping.)

I’d rather watch these Dr. Pepper contestants play cornhole than have a football chest passing contest. How about hitting a football with a tennis racquet? Hitting a hockey puck with a baseball bat? Given this is a football halftime show and involving footballs that are—from my extensive history watching the sport—usually thrown with one hand, there most certainly should be an emergency board meeting called to remedy this gross strategical marketing mistake, ASAP.

Perhaps now that Larry Culpepper has done away with the BCS, he can fix this before moving us to a 6 or 8 team playoff? This feels like a crisis probably more important than changing the playoff system. We need you Larry, and so do the hundred of thousands of college students who need financial aid to advance their education who would throw a football with one hand instead of two.