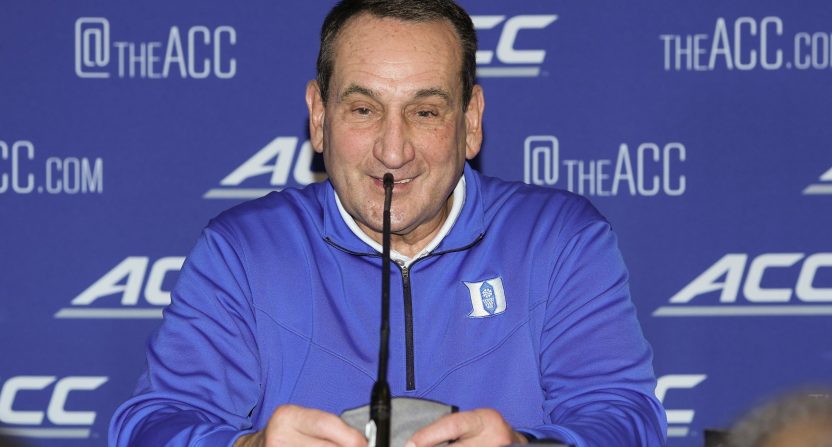 The Duke basketball program will look a lot different in the 2022-2023 college basketball season. It will also have a lot more money handy now that Coach K isn’t on salary.

Legendary Duke coach Mike Krzyzewski retired after this past season following one more Final Four run in a career scattered with them. Coach K collected five national titles, 13 Final Fours, 15 ACC tournament championships, and 13 ACC regular-season titles during his 41-year stint with the Blue Devils. He also collected a whole lot of money for his efforts.

BREAKING: THE BANK@DukeMBB's retiring head coach Mike Krzyzewski earned $12.5 million in 2020-21, according to the school's tax filings released today. My latest for @Sportico on Coach K's many M's:https://t.co/NauIsonNr5

As a private school, Duke’s financial numbers aren’t always readily available. However, according to the school’s federal tax filings for 2020-2021, we now know that the school paid Krzyzewski over $12.5 million that year alone. For that time period, Krzyzewski’s earnings were more than the next highest-paid college basketball coach, Kansas’ Bill Self ($10.2 million), and even dwarfed the salary of the highest-paid football coach, Nick Saban ($9.8 million).

While Coach K’s salary for this past season won’t be known publicly for some time, we can assume that it was in the same ballpark. And though he’s certainly earned the right to make that kind of money, it’s also worth pointing out that, for all the complaining we hear about how college athletics programs don’t have money and are concerned about student-athletes generating money through NIL, the coaches are making off like bandits.

As Syracuse.com’s Chris Carlson points out, Coach K’s salary that year accounted for more than half of the revenue the program earned ($22.5 million).

Good line in this story on Krzyzewski's salary, especially as we hear about the "threat" of NIL. https://t.co/YnVfuo5B4b pic.twitter.com/X2UwLCHURZ

Remember that the next time a college basketball coach bemoans the impact of money on the sport. Are they concerned about money influencing players or are they concerned it means less money in their own pockets?

The announcement of Krzyzewski’s salary certainly got people talking on Twitter, especially in light of recent discussions around player compensation and “guardrails” against that.

Reminder that if Coach K received the same share of revenue as Coach Popovich in the NBA, he would earn less than $1.5M per year.

The juxtaposition of this headline less than a week after “maybe if we made the athletes sit out a year people would stop throwing money at them.” https://t.co/gRXCx9BkUq

Funny how nobody from the NCAA or its member institutions is begging Congress to set up "guardrails," here https://t.co/BYxley0hxL

WHOA. That is crazy money. https://t.co/6lTPQNoPMf

… And in a pandemic-altered season in which many athletic departments cut sports and laid off/furloughed workers. Interested to see what K made during his farewell season (that number publicly available about a year from now). https://t.co/mphLNDyP8t

I seem to recall a lot of talk in college athletics about budget cuts and cost containment and belt tightening in 202-21. Pandemic and all. https://t.co/0huJxbBp85