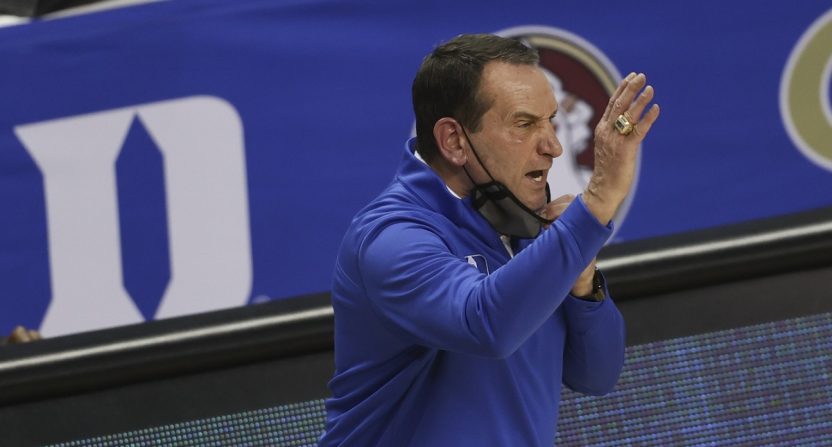 ACC basketball — and college basketball as a whole — is going to look very different next season.

With Krzyzewski’s decision, two of the ACC’s most accomplished and storied basketball programs will soon have new leaders on the sideline. In early April, North Carolina coach Roy Williams announced his retirement and within days, the school promoted assistant (and alumnus) Hubert Davis to succeed him. Which new coach gains the edge early on could add some spice to one of the sport’s greatest rivalries.

Krzyzewski, 74, will have coached at Duke for 42 seasons when he retires. During his Hall of Fame career, Coach K has compiled 1,097 victories at Duke and five national championships. Prior to landing in Durham, he coached five seasons (going 73-59) at Army.

Duke is coming off its worst record since the 1994-95 season, notching a 13-11 mark (9-9 in the ACC) that included getting swept by North Carolina and Louisville. The Blue Devils failed to qualify for the NCAA Tournament for the first time in 24 years.

The 2020-21 campaign was tumultuous, complicated by COVID-19 cases and restrictions, along with the uncertainty of playing a college basketball season. The difficulties Krzyzewski and Duke faced may have been best embodied by the late-season decision by freshman Jalen Johnson to opt out of playing with six games remaining on the schedule. (A foot injury and concerns over aggravating the issue also contributed to Johnson’s choice.)

Yet just how poorly one of college basketball’s traditional powerhouses performed was still surprising.

Scheyer has been on Krzyzewski’s staff for the past eight seasons and was named associate head coach in 2018. Like many of Coach K’s assistants, he also played at Duke and was on 2010’s national championship team.

Perhaps most importantly, Scheyer is viewed as one of Duke’s top recruiters, playing a major role in getting Tatum and Williamson to Durham. That is surely a major reason why he’s now the coach-in-waiting, attempting to ensure stability and as smooth a transition to a new era for the Blue Devils’ basketball program as possible.

Scheyer being named as Krzyzewski’s successor may only seem surprising because there are so many coaches with connections to the Duke program who could take over.

Several of those names could be mentioned if Scheyer struggles as Duke head coach. Taking over for a legend is often an unenviable and insurmountable task, and Scheyer will certainly face pressure to maintain the standard in Durham. If he falters, there will be plenty of candidates rumored as replacements and they won’t encounter the same expectations as an unproven head coach taking over one of college basketball’s most celebrated programs.