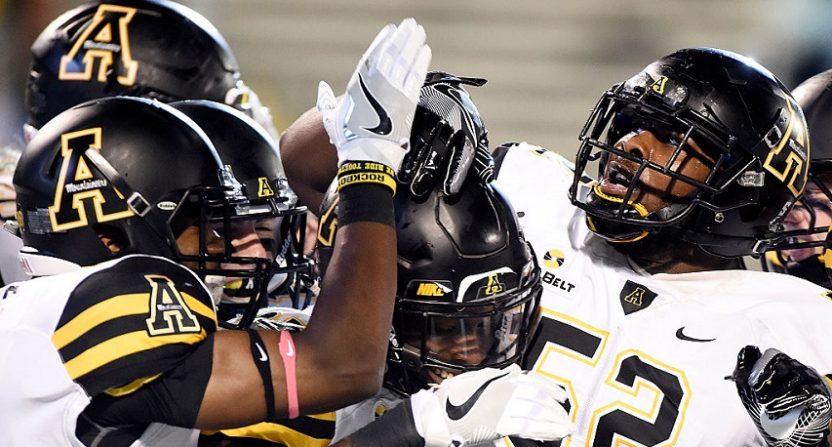 Since the College Football Playoff started following the 2014 regular season, three different teams from three different conferences have represented the Group of Five in the New Year’s Eve/Day access bowls.

Perennial contender Boise State (Mountain West) kicked things off with a win over Arizona in the Fiesta Bowl. Then Houston (American Athletic) ran through Florida State in the following seasons’s Peach Bowl. Western Michigan (MAC) got the bid to last year’s Cotton Bowl, but ultimately fell to Wisconsin.

Those three programs were among “favorites” for the G5’s guaranteed access bowl bid during those seasons, but there were plenty of other names just on the outside looking in. USF, Memphis, Toledo, Boise State and San Diego State are all on this year’s short list of contenders. But which other programs could contend for the G5’s lone spot in the New Year’s Six?

Houston has appeared in an access bowl in the last couple years, and arguably has more talent on the roster than any other G5 school. So it wouldn’t make the Cougars a huge dark horse. But nonetheless, with former coach Tom Herman off to Texas and quarterback Greg Ward Jr. off to the NFL, this program does hit the reset button a bit. Now we get to see what Major Applewhite can do with the job. He loses nearly half of his production across the entire roster. They’re still talented, but coaching change and personnel replacement rarely equal stunning success in year one.

WKU replaces most of its offense and its head coach, so right away, there’s an uphill battle. Nonetheless, the schedule accommodates a potential undefeated run and even features a couple of power conference road games too, at Illinois and Vanderbilt. According to Bill Connelly’s S&P+ and win probabilities, the Hilltoppers are favored to win all but one contest all year (the November matchup at Vandy). The weak C-USA East division could also be an Achilles Heel, though. There’s no room for error in conference, and this team may need to go unbeaten to be considered a serious contender.

Last year’s Colorado State team finished 7-6. but was top-40 according to S&P+. This year, they bring back more offense than almost anyone in the country (16th-best in terms of returning experience on O), and there’s a passable amount of defense back as well. Playing in the Mountain West’s Mountain division is a big boost, as is facing three Power Five teams in Alabama, Oregon State and Colorado. There could be as many as nine or 10 bowl teams on this schedule. They’re highly unlikely to beat ‘Bama, but the other games are all doable. Even a loss in MWC play is acceptable if they manage to beat Boise State.

App State has been great since they arrived at the FBS level, and this season will be no different as they return one of the country’s most experienced (and productive) teams. The opener at Georgia will be difficult, but beyond that, they avoid fellow Sun Belt contenders Troy and Arkansas State, and the toughest draw over the last six games is a home game vs. Georgia Southern. Taylor Lamb and Jalin Moore have a chance to put up record numbers against the bottom of this league (which is rougher than any other).

Neal Brown’s team started to break through last year with a 10-3 campaign and a near-miss vs. Clemson. Now they get to see if they can do it again while replacing nearly half of the defensive production. What helps there: almost the entire offense is back from a group that scored over 33 points per game. Troy goes on the road at Boise State and LSU, so odds are slim that their record is any better than 10-2. That said, the biggest challenge the rest of the way is Arkansas State (again, on the road).

Brown knows he’s off to bigger and better things if the Trojans win eight or more. His team is anxious to hit that number as well in a very winnable Sun Belt.

In just two seasons in charge at Tulsa, Philip Montgomery already has the Baylor-style spread offense rolling for the Golden Hurricane. Last year’s group averaged 533 yards and 42.5 points per game. Many of the players responsible for that production have graduated, but the remaining pieces at least understand the system already. The defense — not a strong suit last year — does return a lot of production, however, which could take some onus off the offense.

Tulsa is the most unlikely access bowl team here, but also has the most elimination games with their fellow contenders as well. The Golden Hurricane face Toledo, Houston, Memphis and USF (as well as Oklahoma State).