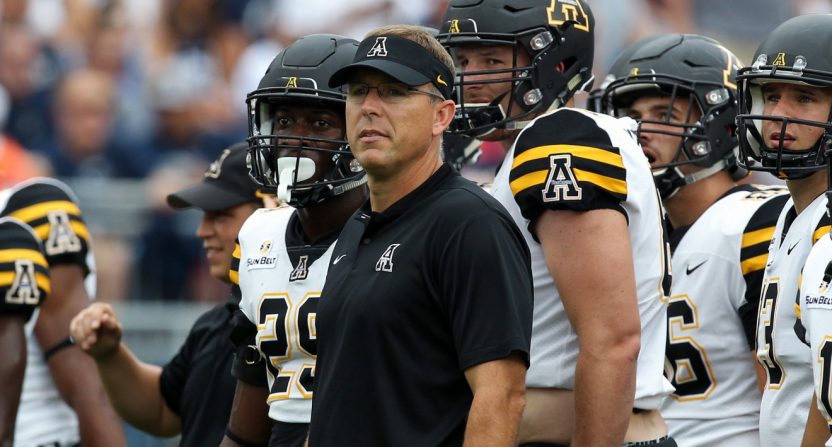 For the second year in a row, Christmas came early for college football’s most hardcore of fans, the ones who live and breathe recruiting news.

Wednesday marked the beginning of the early signing period, where high school athletes can officially submit their letters of intent to their chosen schools roughly a month and a half before the traditional signing period in early February. While this was a new experiment in motion, this year we knew what we were getting into. The large majority of signing classes were ironed out for the top college football programs around the country with nearly full or full recruiting classes being finalized throughout the day. Now that we’ve seen this process play out twice, we can safely say the early signing period really puts new coaches in new spots in a sticky situation.

Results will vary by the school because some schools will just naturally recruit better than others. A head coaching change at Alabama, for instance, may threaten the Crimson Tide’s run of recruiting national championships (with three five-star players and 22 (22!) four-star players signed on Wednesday, it’s safe to say Alabama did it once again), but Alabama would stand a reasonable chance to sign a highly-touted recruiting class with a new head coach even if in an early signing period. Ohio State would be the perfect example of that this season.

With Urban Meyer stepping down after the Rose Bowl and Ryan Day taking over as head coach, Ohio State still managed to land a solid class by coming in at No. 12 in the 247 Sports composite rankings. Although this is the first time in years Ohio State will not have the top-rated class in the Big Ten (and this year Ohio State is actually third behind Michigan and Penn State at the moment), they did bring in a class of 16 commitments that will continue to add quality depth to the program’s loaded roster.

But as the results suggest from Wednesday, not every new coach is walking into a seamless transitional situation the way Day is in Columbus.

Take Louisville, for example. The Cardinals had a disaster of a football season that saw Bobby Petrino relieved of his position as head coach on November 11. It wasn’t until December 3 when the Cardinals hired Scott Satterfield away from Appalachian State, fresh off of Satterfield coaching Appalachian State to the Sun Belt Conference championship. Satterfield left for Louisville right away so he could begin putting together his staff and then scrambling to decide how to attack recruiting. Satterfield drew some criticism from some for the way he handled the situation when he opted not to follow-through on some scholarships for players previously extended offers by Petrino. That led to some turmoil in the state as one high school has gone so far as to block Satterfield from contacting their players. The end result, as far as Wednesday was concerned, was Louisville announcing an early signing day class of just four recruits.

Four recruits on signing day looks bad at a glance, especially since just one came from within the state of Kentucky. But that’s not necessarily a preview of things to come. Satterfield and his staff only had two weeks to form their recruiting tactic. By making the decision to not honor previous offers made to recruits (a tactic that’s not at all uncommon in college football), that meant Louisville was willing to accept the initial signings will lack in quantity compared to many others around the ACC and the nation. As a result, Lousiville comes in ranked 129th in the nation on the 247 Sports composite team rankings after one day of signing day. Odds are that’s not going to see much improvement in the final couple of days of the early signing period, which means Satterfield and Lousiville will focus their energy on working the recruiting pitches leading up to the February signing period. They won’t magically rocket up to the top 25 in the Class of 2019 given the talent that is already spoken for elsewhere, but focusing their energy on the right players that can fit the system Satterfield is bringing to Louisville is more important than anything in the first recruiting class.

Let’s check in on Les Miles and his first recruiting class at Kansas… pic.twitter.com/8pTTeLJIt5

Like Satterfield, Kansas made a head coaching change in early November by firing David Beaty and two weeks later luring Les Miles out of retirement. Miles got back in the swing of things by trying to start building a class that can help build a foundation for a new era of Jayhawk football. Although he had slightly more time to establish himself compared to Satterfield at Louisville, recruiting to Kansas isn’t an easy task. But the Mad Hatter did what he could to get 11 players to sign with Kansas on Wednesday. A good number of those recruits were junior college transfers, which is a solid way of quickly boosting your class and roster depth for the situation Miles inherited. Recruiting to Kansas is no easy task, and with a short window to work in recruiting, Miles took advantage of adding some experienced players from the JUCO ranks to get the ball rolling.

As the day went on, Kansas had their class rank rise to 106th in the nation on the 247 Sports composite team ranking. At this point in time, the team rank is still 45 spots below where Kansas ended the Class of 2018, but there’s still time for Miles to put some finishing touches on his recruiting class with the traditional signing day.

Satterfield and Miles showed there are two ways to handle an early signing day when you are the new coach of a program. Satterfield chose the option to accept a smaller class with the intent on taking more time to solidify a few pieces for the next signing period, selectively choosing only players he wants to be a part of the program. Miles chose to boost the depth and experience on his roster by welcoming a number of JUCO transfers along with some high school recruits. Both strategies could pay off and sometimes one strategy is better suited for one program than the other. In the case of Satterfield and Miles, they both seemed to find a strategy that worked for them on their first early signing period in their new jobs.