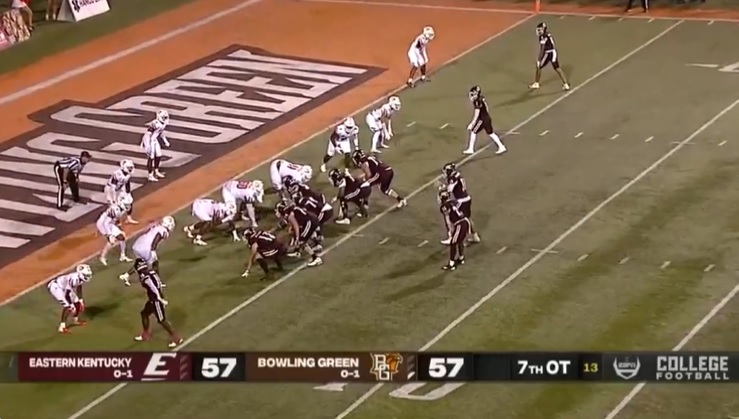 The wildest game of Saturday’s college football slate came from a game hidden deep into the selections on ESPN+.

The Eastern Kentucky Colonels took down the Bowling Green Falcons 59-57 in seven overtimes, in a game that took four and a half hours.

At seven overtimes, it’s only topped by Illinois’ nine-overtime victory over Penn State in 2021.

Oh, and Eastern Kentucky — who entered the game as a 7.5-point underdog — is an FCS program, while Bowling Green — a member of the MAC — is part of the FBS.

An unbelievable FCS over FBS win:

It's the most OTs for an FCS program facing a D-I opponent. However, Bethune-Cookman defeated D-II Virginia State in eight OTs on Sept. 26, 1998. pic.twitter.com/f95U8ByW9o

Eastern Kentucky sent the game to overtime with a touchdown — followed by the game-tying extra point — to beat the fourth-quarter buzzer.

In the third overtime, Eastern Kentucky converted the game-tying two-point conversion on an 18-yard pass.

Eastern Kentucky converted their two-point try from the 18 yard line to send it to a fourth OT I'm howling pic.twitter.com/AdBhzGEx3Y

And in the fifth overtime, Eastern Kentucky ran a hilarious play in an attempt to win the game. The play failed.

Eastern Kentucky tried to run a hook & lateral to an offensive lineman from the 2-yard line in the 5th overtime against Bowling Green. It failed miserably.

I love college football so much.

Finally, in the seventh overtime, the Colonels came through and completed a wacky walk-off victory.

Eastern Kentucky trailed the game 10-0 in the first quarter, before erupting for a 24-points second quarter that gave the Colonels a 24-17 lead at halftime.

Here’s a look at how the college football world is reacting to Eastern Kentucky’s upset victory in a seven-overtime marathon:

In the wildest football game you will ever see, Eastern Kentucky defeats Bowling Green in 7OT (!), 59-57.

Just an insane win for the Colonels. FCS over FBS upset.

FCS Eastern Kentucky gets 7-OT win at Bowling Green in game for which EKU is getting $350,000 guarantee. This is 3rd FCS-over-FBS win of the season, the first in OT after two previous FCS losses in OT

They had a ton of chances to win & couldn’t get a stop. Just a brutal loss against an FCS opponent at home.

If there’s a positive, they figured some things out offensively & Ta’Ron Keith has emerged as a real playmaker. But man…