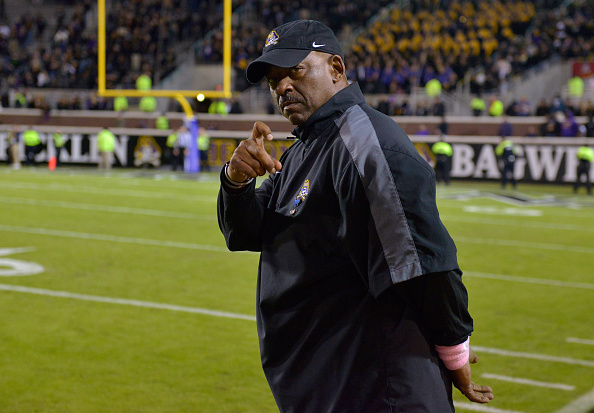 Between all of the jobs opened due to firings and retirements as well as the opening created by candidates taking them, we thought we had a final count on the number of FBS head coaching jobs by now. Turns out, East Carolina University had other ideas.

ECU announced Friday that head coach Ruffin McNeill has been fired after a 5-7 season, the school’s first losing record since 2011.

In six seasons, McNeill compiled a 42-34 record, which includes a 30-18 record in conference play. The Pirates were just two seasons removed from a 10-3 record, went to a bowl game in four of McNeill’s six seasons and became known for upsetting ACC schools in their region (North Carolina, N.C. State and Virginia Tech). The move is all the more surprising given that the Pirates were expected to take a step back season after losing record-setting wide receiver Justin Hardy and quarterback Shane Carden.

National reaction was that of shock and surprise.

Unless there’s something extenuating that we don’t know about, the Ruffin McNeill firing is perplexing.

USA Today’s Dan Wolken says that an assistant coach change that McNeill was unwilling to make may have exacerbated the move. Incidentally, all eyes are now on former ECU OC and current Oklahoma OC Lincoln Riley to see if the school’s swift action was an attempt to grab the highly-touted head coaching prospect for themselves. Others think it’s doubtful that Riley would dance on McNeill’s grave, so to speak. He might also be locking in on South Carolina.

We’ll find out if East Carolina is in a position to be so aggressive when we find out if Riley shows up or not. If not, then ECU will be rolling some serious dice in a conference that’s getting better all around them and a team full of players who came here to play for Ruffin McNeill. We may look back on today’s news that the decision that took ECU to the next level or doomed it back to mediocrity.