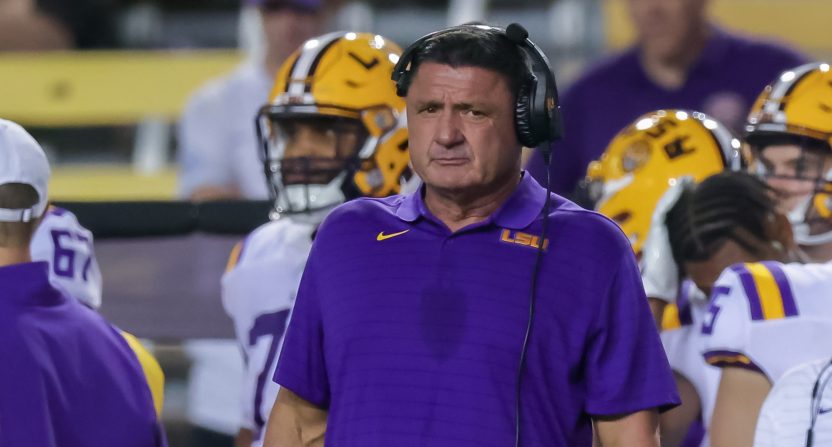 On January 13, 2020, the LSU Tigers completed a 15-0 season and won the national championship in Ed Orgeron’s third full season as head coach. It was the culmination of everything so many people had hoped would happen when the Louisiana native was hired full-time following an interim stint in 2016.

Less than two years later, Orgeron and LSU have agreed to part ways following the 2021 season as part of a separation agreement.

It’s a stunning change in such a short amount of time for the once-mighty Tigers, who are 4-3 following an upset win over No. 20 Florida on Saturday.

For Orgeron, his fate was sealed not in one major gaffe but a series of off-field concerns and issues, coupled with a lack of wins on the field to justify them. The most notable of which was when Orgeron was named in reports of the LSU administration’s handling of sexual assault allegations against football players on campus. Orgeron’s folksy, small-town charm certainly worked for a while, but it could also get him into trouble in ways more polished coaching personalities might have avoided.

This well-reported @BrodyAMiller piece goes into the many reasons Ed Orgeron is out at LSU — such as this detail: https://t.co/AiCIoiCKNs pic.twitter.com/ZemNazn31L

Moments like the one before the UCLA game, where he referred to the Bruins’ main color as “sissy blue” before LSU ended up losing, came to represent the last two years of Orgeron’s tenure.

And so, despite this weekend’s result, it felt inevitable that Ed was on his way out, even though he’d led the school to a championship just two seasons ago. However, this unique agreement, assuming it is followed through on, provides Orgeron with the chance to go out on his own terms, likely because of that championship.

Not to mention, it’s not a great look for LSU to fire their coach two years out from a title, but it’s better than firing him less than two years since.

Naturally, there were plenty of reactions from around the college football world about the big news.

Ed Orgeron Orgeron was the architect of the single greatest season of LSU football I've ever seen. He owns that and he gets credit for that. Period.

eh, only difference between this and chizik is auburn let chizik lose every conference game before doing him in.

i actually applaud both sides here for not delaying this.

and now, what might be the best job in college football is open. https://t.co/F0A89Z7U9J

Spare me the stories about anything off the field coming into play with Ed Orgeron's firing. Everything that has been reported would have gleefully been ignored had he continued to win. LSU suddenly found a conscience? No. What was unacceptable was going 9-8 the last two years.

Regardless of their recent downturn, the LSU job is going to be one of the hottest jobs in the market, if not the hottest. Expect to hear some heavy hitters get considered for it.

In the meantime, Orgeron still has a good chance to coach the Tigers to a bowl game. It’s a tough schedule ahead but there’s a decent chance LSU can at least grab a couple more victories. And if they can somehow find a way to beat Alabama before he goes, it might be an ideal ending for him.