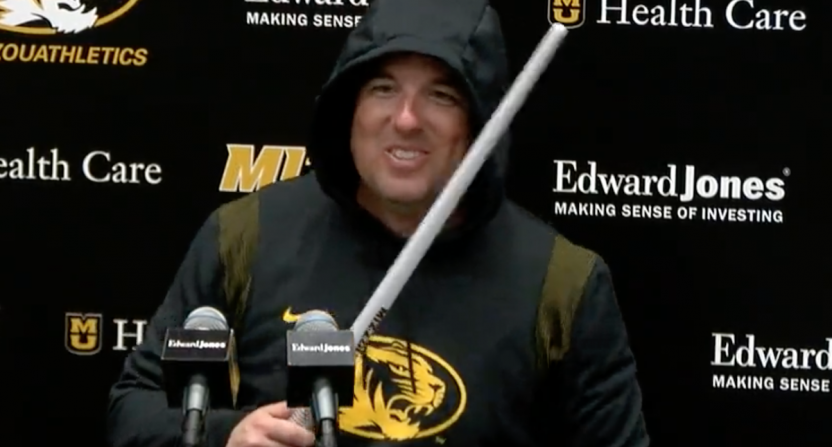 "May the force be with you." pic.twitter.com/cVw9CcvXK0

At the end of his postgame press conference, Drinkwitz pulled a hood over his head as he was handed a toy lightsaber and said “May the Force be with you,” followed by an awkward smile and sip of his Diet Coke.

So what was that all about? Was Drinkwitz letting his geek flag fly after a big win? Not so much, as it turns out. His Star Wars reference was a response to Florida coach Dan Mullen dressing up as Darth Vader last season following the Gators’ 41-20 defeat of Missouri.

In Mullen’s defense, that game took place on Halloween. According to him, he’s always wanted to make sure he and his coaches celebrated holidays with their families, even if it meant coming back to the office later or early the next day.

“You’re never around on holidays,” Mullen said later (via 247sports.com’s Jacquie Franciulli). “It’s something we did a long time ago at Mississippi State was make sure coaches, especially those with young kids, would either come in super-late at night or super-early in the morning and you’d be able to take your kids trick-or-treating.”

The Gators were also probably fired up after a brawl before halftime with the Missouri squad. But would Mullen have dressed up like that if Florida had lost?

Drinkwitz and the Tigers football program apparently took that as a sign of disrespect that they carried over to this year’s match-up. Or it was all in good-natured fun. Judge for yourself.

Regardless, it was an additional lightsaber through the chest for Mullin in what’s been a difficult season at Florida, including losses to Kentucky, LSU and South Carolina, and giving up 52 points to Samford.

This loss was a result of Missouri rallying from behind three times in regulation before forcing overtime, and then converting a two-point conversion to win the game rather than tie and go to another overtime period.

Missouri goes for 2 and ends it in overtime to beat Florida!! #Florida #Missouri pic.twitter.com/MMbk3QPECc

With the defeat, the Gators drop to 5-6 and still aren’t bowl-eligible with only a game against in-state rival Florida State remaining on the schedule. During the past two years under Mullen, Florida appears to be trending in the wrong direction rather than competing with Alabama and Georgia as a top program in the SEC. The Gators’ 2-6 conference record is their worst since 1979. And Mullen’s job could be in jeopardy.

That doesn’t appear to be an issue for Drinkwitz, whose team is 6-5 and bowl-eligible in his second season. (The Tigers are tied for third place with Tennessee in the SEC East at 3-4.) And he may have won himself some geek cred with Star Wars lovers for sporting a lightsaber during a football press conference. But maybe he could show a bit more confidence and feel the Force flow through him next time.