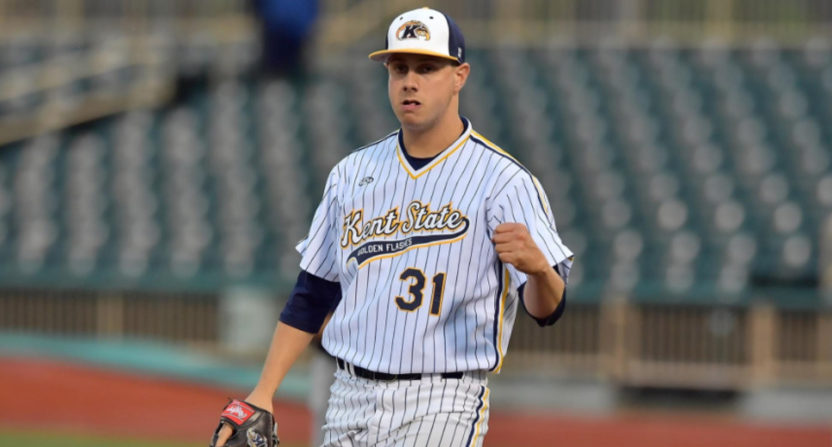 The extensive athlete bios on many schools’ websites sometimes take interesting twists, and that’s definitely the case for Kent State Golden Flashes’ senior pitcher Eli Kraus. Most of Kraus’s bio is a normal collection of his year-by-year performance, but it gets particularly interesting at the “Personal” section.

The oddness in there involves references to It’s Always Sunny In Philadelphia, especially the Season Five episode “The Waitress Is Getting Married,” where Dennis (Glenn Howerton) and Mac (Rob McElhenney) try to set up an online dating profile for Charlie (Charlie Day) to help him get over his crush on The Waitress. That involves Charlie talking about how his likes are “Magnets” and “Ghouls.”

But for commentator Sam Levitt, who was calling Kent State’s game against Sam Houston State on ESPN3 Friday, the reference didn’t click, and that led to quite a funny sequence. Kraus tweeted it out Saturday:

If you’re a fan of “It’s Always Sunny in Philadelphia,” please listen to this. My player bio couldn’t have confused the ESPN broadcaster more. @GlennHowerton @Starting9 pic.twitter.com/F2ke70cmHV

“Let me go word-for-word what some of these are for Eli Kraus. He enjoys magnets. That’s an…interesting…hobby. He fears goblins and ghouls, so let’s hope that nothing pops out anywhere. Chism a flyout to left in the first inning. 1-2 up and away. What else we got here? Superstition is turning off every light three times to stay alive. I don’t even know what that means.”

For reference, here’s the Always Sunny scene this is based on:

It’s a pity that Kraus wasn’t able to work “milk steak” (Uproxx’s Josh Kurp once tried to make it, even), but that might have been too obvious in alerting people to what was going on here. The magnets and ghouls are a nice, more subtle approach.

Interestingly enough, Kraus spoke to Brady Drake on the Brady and Friends KORD Radio podcast (a student radio station at Concordia College in Moorhead, Minnesota) Saturday about this, and said this is a long-running part of his bio that started as a joke with another teammate:

“I filled it out it out like two years ago, I think I was in my sophomore year, and I was sitting at a restaurant with a buddy of mine, not a baseball player, just a friend of mine. And there was a fifth-year senior on the team, I actually got him into Sunny and he just loved it. I had this idea, so I wrote all that down and texted our SID, ‘Hey, is it okay if I put this in my bio? I’ve just sent this to you, I’m just trying to make somebody laugh.’ She said ‘Who is it?’ and I told her who it was. I was planning on changing it back, I think, I just wanted the fifth-year on our team to see it. So I did it, and she told me when it was done, and he went and looked at it and was cracking up. So this was literally just to make somebody laugh.”

Well, Kraus made a lot of people laugh with this and the way it was read on-air. And he got some love from the Sunny cast:

Charlie Day just put my video on his Instagram. I have begun to peak and everyone’s feeling it (Sunny reference).

But maybe the best part of this was this tweet afterwards from Levitt, the guy who called this game:

Should be noted that my college friends watched "It's Always Sunny" all the time and clearly I NEVER PAID ATTENTION. https://t.co/29n8bXQ8Gz

That’s just funny all around.