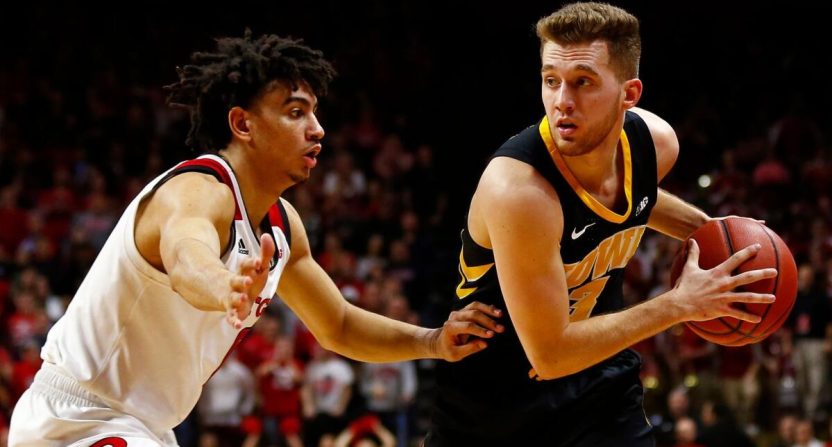 Tonight’s game between the Iowa Hawkeyes and the Rutgers Scarlet Knights was back and forth all the way through and had fans on the edge of their seat, but it certainly ended in an anticlimactic fashion.

The two Big Ten teams found themselves tied with only 27 seconds left in the game. Rutgers had the ball and was holding it for the last shot. Iowa was playing seemingly perfect defense on the play, until with two seconds were left the refs called a foul on this play.

Rutgers was in the bonus, so they went to the line where senior forward Ron Harper Jr. went on to make both. Iowa had one last chance to tie or win the game but ultimately came up short, losing 48-46.

Iowa got the look they wanted but come up short to Rutgers
pic.twitter.com/WjKLpkzZkX

The official who called the foul with 1.9 seconds in the Iowa and Rutgers game should be FIRED!!!

Big Rutgers win over Iowa but that was a soft call by the referees to give them the game-winning points. Calling this foul on Iowa to send Rutgers to the line on a play 22 feet from the basket with 2 seconds left to go — oof. pic.twitter.com/ri1Wvz7YWh

TERRIBLE foul call in the #Iowa #Rutgers game. A harmless perimeter bump with the game tied????? What a bunch of bs! 🏀🤷‍♂️

The foul call against Iowa was bad at anytime . With 1.9 left it was beyond bad. Let the players decide. #IowaRutgers

Soft whistle on Murray with 1.9 seconds to play. Wow

Iowa fans have to rightfully feel that they should have at least had a chance to see if Rutgers could have made the final shot if no foul were called. That is certainly an instance that you have to let the players decide the game and keep playing on through the little contact that was seen on that play.