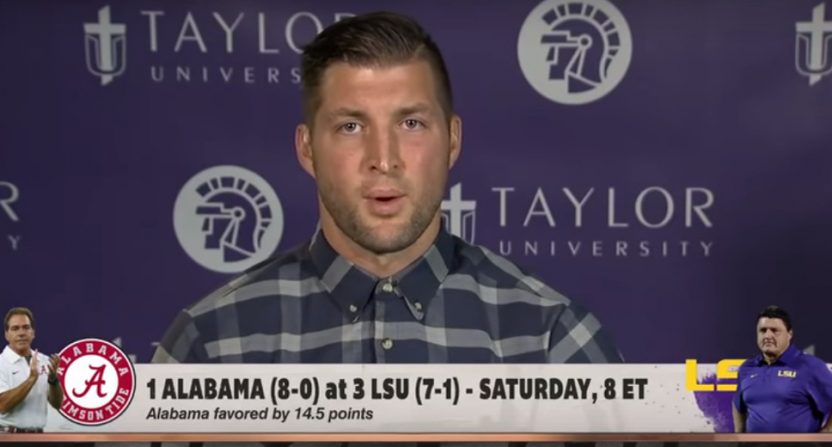 There’s been a lot of media criticism of the University of Maryland this week, especially after their initial decision to keep head coach DJ Durkin despite the offseason death of 19-year-old player Jordan McNair after heatstroke suffered in training. That death led to a whole lot of troubling revelations and damning reports about the program’s culture, and it led to plenty of calls for Durkin’s dismissal. But ESPN analyst Tim Tebow is taking a different tack. Maryland eventually changed course Wednesday after all that criticism, with university president Wallace Loh deciding to fire Durkin (reportedly against the wishes of the controlling board of regents), and that’s what Tebow seems to have a problem with. Here’s his appearance on First Take Friday:

Here’s a transcription, via Scott Gleeson of USA Today:

“You need to make a decision and you need to stand with it. Because right now (the decision to fire Durkin) shows people are so afraid to have conviction to believe in something when they make a decision that they’re like, ‘oh my goodness social media’s against us. Well we’re gonna fire him now.’ You just made a decision to keep him. If that’s your decision, if you believe that’s what’s right for the program, then it shouldn’t matter what I say, what social media says.

“So many people want to be liked instead of being respected. And I think more universities need to stand by what they believe is right.”

…Tebow clarified that he didn’t necessarily feel Durkin deserved to stay, and said the university now needs to bring in a “high character, high integrity young face” to reshape the program.

“I’m not saying their decision was right,” he said. “But (Maryland officials) need to have the courage to say you know what, ‘I’d rather be respected than liked.’ And too many people in our day and age, they just want to be liked.”

…”Listen, let me tell you something social media’s never going to always like you. There’s always gonna be naysayers. It changed the Tennessee job. It changed (the Maryland job),” Tebow added. “I want these presidents and ADs to stand up and when you say something, have it mean something. Let’s be men of our word and have character when we say something when we believe in and have conviction. It’s just, I mean, people say something, it’s not popular let me switch. Who cares about being popular? Have respect. Stand up for what you believe in.”

First off, claiming that Maryland made this move just to be “popular” is ludicrously wrong. Yes, they made this change because of the vast numbers of people, from students to fans to media members, who illustrated just how bad their initial decision was, but the decision deserves to be discussed on its merits; it’s not right just because it’s popular, but also, a much-criticized decision isn’t right just for being much-criticized. It’s also worth noting that this isn’t as much of a flip-flop as Tebow claims; all indications were that Loh wanted to part ways with Durkin earlier, but that the board kept him from doing so, and he eventually decided (as he’s set to retire in a year anyway) that he would make the move despite their prohibition. So that is acting with the kind of character and conviction that Tebow claims to be praising.

It’s also a cop-out from Tebow to not say whether he felt Durkin deserved to stay or not. It’s very deliberate and careful of Tebow to not fully stand behind the coach who saw a player die on his watch and then handled the ensuing investigation incredibly poorly, but it’s not a good stance for an analyst, especially with the criticism of Maryland for switching course here. If you’re criticizing that process, you’re also criticizing its ultimate result, and in Tebow’s case, he’s saying that after making the initial move to keep Durkin, the Terrapins should have stuck to that despite the well-founded criticisms of it. And if there’s any reason to keep Durkin (a coach with a 10-15 career record who would have major recruiting deficiencies after all this, to say nothing of his problematic behavior throughout the whole situation), Tebow sure isn’t providing it.

And really, being “respected more than liked” should also apply to those who make a mistake, learn from the criticism of it and correct it. Stubbornly sticking to whatever decision you initially make just because it’s the first decision you make isn’t exactly an admirable trait. (And if that’s the case for Tebow, why would he ever try minor-league baseball?) No, this is just bad criticism from Tebow, and a bad look for him.