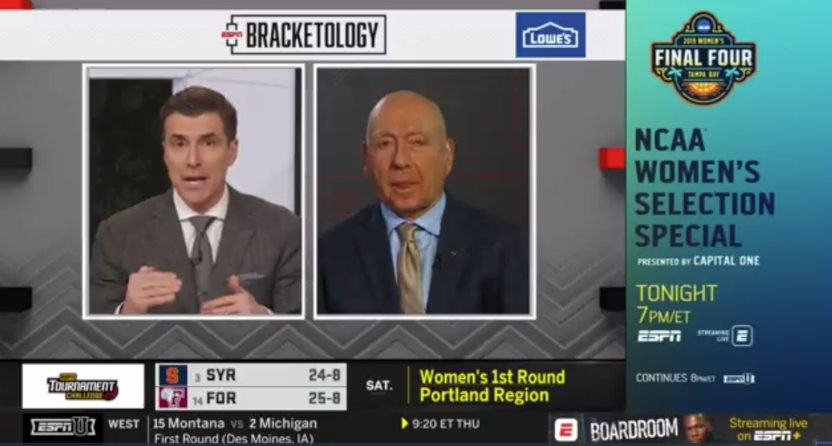 Remember back in 2016 when someone posted the full men’s basketball NCAA tournament bracket online hours ahead of CBS’ expanded two-hour selection show? That leak led to a NCAA investigation, and to the NCAA and CBS taking anti-leak measures in subsequent years. Well, there’s another leak hours ahead of a selection show, this time on the women’s side. But this time, it appears to have been a network shooting themselves in the foot; the leak happened at ESPN, which will be broadcasting the selection show on its main channel at 7 p.m. Eastern. Here’s ESPN’s apology:

ESPN statement on women's bracket mishap: "In the midst of our preparation, the bracket was mistakenly posted on ESPNU. We deeply regret the error and extend our apology to the NCAA and the women’s basketball community."

So, just what happened here? Well, four hours before that selection show, ESPNU put the full women’s bracket out there in piecemeal form. Their Bracketology show was breaking down the men’s bracket (revealed Sunday on CBS), but their sidebar and bottom graphics started including information on women’s matchups that weren’t supposed to be announced until Monday night. Here’s how this started; during the show’s intro, the sidebar first showed men’s first-round matchups but the bottom bar showed women’s matchups from the Portland region, and the sidebar then quickly changed to women’s matchups from the Greensboro region as well:

The bottom bar then went back to men’s matchups, but the side bar showed off the remaining (Chicago and Albany) women’s regions:

And this happened again about five minutes into the show (after another sidebar ad for the women’s selection show, no less):

Minnesota reporter Blake DuDonis collected some screencaps of the “reveal”:

In what can only be described as remarkable, the #NCAAW bracket was just on ESPNU by mistaken. I’ve managed to grab three sections of it if anyone else wants to help fill it out.

Spoiler: UCF & Tennessee are IN pic.twitter.com/xzpKpGpjdT

They cut off before bottom half showed but in the Albany region:

It’s unfortunate for the selection show that all the important information is already out there. And this is definitely further proof of the need to be extremely careful with embargoed graphics and announcements. But it does bring back memories of a great Twitter meme: