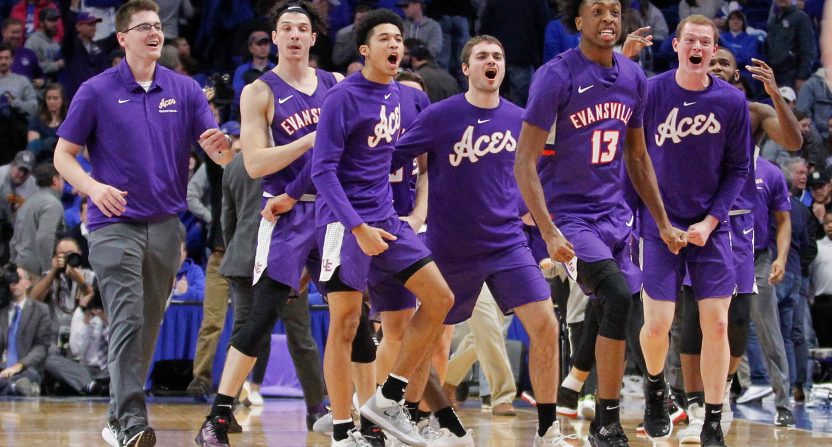 The Evansville Purple Aces traveled to Rupp Arena to take on the big dogs of college basketball, the Kentucky Wildcats. The top ranked Wildcats may have thought they were getting an easy non-conference win against a team who finished 11-21 last year but anyone can win on any given day and this was Evansville’s moment.

In a result nobody saw coming, Evansville upset Kentucky 67-64 at home. Yes, Evansville. Evansville had the lead the majority of the game and was leading by as many as eight points. Senior K.J. Riley and junior Sam Cunliffe led Evansville with 18 and 17 points respectively. The Purple Aces really excelled on the free throw line, going 12-13 as well as hitting nine three pointers in the victory.

To show how unlikely this was, Evansville was winless (0-33) against Top 25 teams on the road and Kentucky was 39-0 against unranked non-conference teams before tonight. And as Dari Nowkhah notes, Kentucky hadn’t lost to an unranked, non-major conference team as #1 since 1950. There are a lot of qualifiers to that stat, but that’s still pretty rare.

Kentucky had not lost as #1 against an unranked, non-major conf team since 1950.

One disappointing part of this massive upset was that it was on SEC Network. No one could blame ESPN for putting Evansville-Kentucky on the SEC Network because it’s a non-conference game where Kentucky was favored by 25 points. Everyone assumed it would be a blowout. Because of that, announcers Paul Sunderland and Andy Kennedy weren’t that excited about the result. They gave Evansville credit for getting the win but Sunderland and Kennedy acted more like they were in line at airport security than appreciating what happened in front of them.

Granted, this was the SEC Network so the vast majority of the viewers were probably Kentucky fans but you have to imagine if this was on ESPN, and most viewers would probably still be Kentucky fans, the commentators would’ve gone crazy at the upset.

Anyway, Evansville gets a win their players and fans will remember for the rest of their lives. For Kentucky, they’ll be out of the No. 1 spot but this loss is early enough that it shouldn’t hurt them in the grand scheme of things this season.