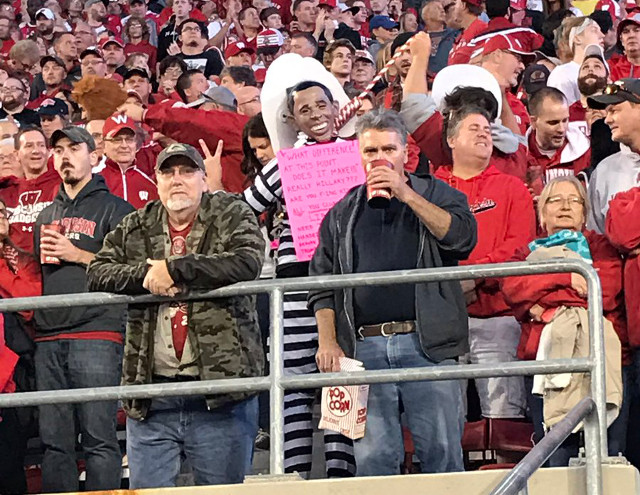 Effigies of President Obama have shown up all over the place this year, but a particularly problematic one was at the Nebraska-Wisconsin game Saturday.

A fan at that game, played at Madison, WI’s Camp Randall Stadium Saturday, decided to bring an effigy of the president with a noose wrapped around his neck:

At the @UWBadgers game and there is a man with a mask of President Obama and a noose. This is racism, why was this allowed into the stadium? pic.twitter.com/zKEqhdDYny

The “fan” also has a negative sign about Hillary Clinton (of course), but that’s hard to make out and frankly not important when compared to the blatantly racist costume and prop he brought into the stadium. After a flood of tweets, Wisconsin Guest Services did ask the fan to remove the noose, and he did.

The Badgers posted a statement after their 23-17 OT win over Nebraska, which you can read below:

Free speech arguments or not, what needs to be said is this kind of an Obama effigy was blatantly racist and horribly offensive given the noose and the U.S. history of lynchings, despite what the fan and some others will probably say to the contrary. However, there wasn’t much more Wisconsin could do beyond what they did, and they should be commended for taking action.

And if that made you feel bad about humanity, take a look at this tweet, which will make you feel a lot better:

My daughter is Jewish. Her best pal is Muslim. For Halloween they created a superhero team: The Juslims. I've rarely been more proud. Truly. pic.twitter.com/zqPCCwzshR

[The Big Lead; photo from @woahohkatie]