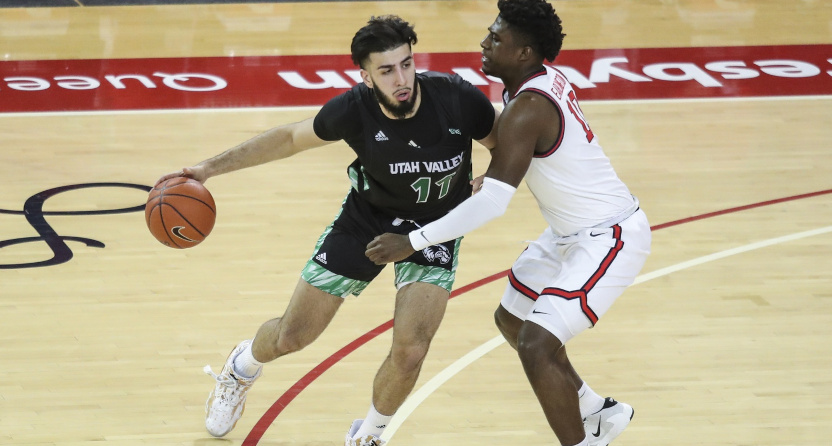 Some news from Friday may wind up being one of the bigger college basketball player shifts this offseason, or it may wind up meaning nothing at all. That’s transfer news around Fardaws Aimaq, a 6’11”, 245-pound 23-year-old center from Vancouver, B.C., Canada.

Aimaq (seen at left above driving against St. John’s Red Storm guard Marcellus Earlington in a January 2021 game) started his NCAA career with the Mercer Bears from 2018-19, then transferred to Utah Valley, where he’s shone with the Wolverines over the last two seasons. In 2020-21, he led all of Division I with 15 rebounds per game, then he followed that up with 18.9 points and 13.6 rebounds per game this year en route to selections as both the WAC defensive player of the year and overall player of the year. He put up the second-highest rebounds per game number in Division I this season, and was rated as 247 Sports’ 10th-overall transfer.

As for where he’s headed, Aimaq announced live on The Field of 68 Friday that he’s committing to Texas Tech. He’ll play for the Red Raiders if he returns to college, choosing them over the Texas Longhorns and Washington Huskies.

The “if” there is notable, though, and Paul brings that up to Aimaq at the 5:48 mark. Aimaq is an early entrant for the 2022 NBA Draft at the moment, and has until June 13 (10 days before the draft) to withdraw from that and return to college. If he chooses to keep his name in the draft, he won’t ever play for the Red Raiders. So this transfer commitment could wind up not meaning much for the college basketball world.

Paul asks about the odds of Aimaq returning to college, and Aimaq says “As of right now, it’s a 50-50 decision. Obviously, workouts are coming up next week, I’ll be starting those, working out for teams, and going through the whole combine stuff and everything. It will truly depend on…obviously, if I’m at a place where it’s worth it for me to leave, then I’ll take that route, but if it’s not, then I’ll come back to school for another year and improve my stock and make a run at the [NCAA] Tournament and build a legacy at Texas Tech.”

So there’s going to be some notable news ahead from Aimaq. But it remains to be seen if he’ll have a further impact in college or not. If he does wind up returning to the NCAA ranks and playing for the Red Raiders, that’s a big addition for them. Under new head coach Mark Adams (with predecessor Chris Beard leaving for Texas after the 2020-21 season), they went 27-10 overall and made a run to the Sweet Sixteen. If Aimaq does wind up joining them, that team (which also added Oregon Ducks’ guard De’Vion Harmon, but lost guard Terrence Shannon Jr. to Illinois) could be one to watch even more closely in 2022-23.

[The Field of 68, 247 Sports; image from Wendell Cruz/USA Today Sports]