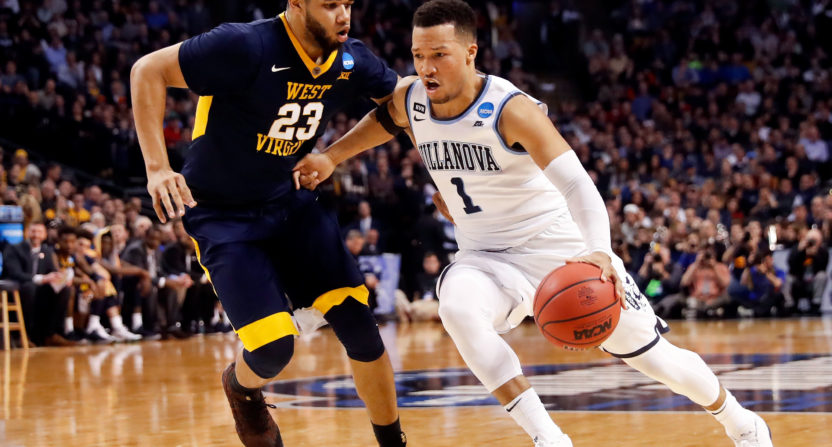 BOSTON — It started, as it so often does for Villanova, with Jalen Brunson. With the Wildcats down five points and just under 11 minutes to play in their Sweet 16 matchup with West Virginia on Friday, Brunson bided his time on the perimeter then beat a defender off the dribble, flashed to the basket and sunk a left-handed layup as he was fouled.

That and-one layup launched Villanova on an 11-0 run, which became a 22-6 run, and by the time the clock hit zero, the Wildcats had secured a comfortable 90-78 win that earned them a berth in the Elite Eight.

“I’m so proud of our guys’ leadership,” Villanova coach Jay Wright said afterward. “Jalen Brunson, Mikal Bridges, and Phil Booth, our three leaders. When we got down six, I saw they pulled everybody together and just kept us together to grind it out.”

If there was any doubt that the Wildcats — who entered the NCAA Tournament as the No. 2 overall seed — were the best team standing, they quashed it during that second-half run. The seven-minute stretch showcased Brunson’s playmaking, Omari Spellman’s brilliant athleticism, Mikal Bridges’ refined shooting stroke and the entire team’s ability to leave an opponent in the dust.

Looking for a favorite Villanova highlight from the mid-second-half spurt? You’ve got quite a few options. There was Brunson’s driving lay-up. Bridges’ step-back catch-and-shoot go-ahead 3-pointer two possessions later. Eric Paschall’s powerful slam over West Virginia brick wall Sagaba Konate. But in the end, no sequence encapsulated the Wildcats’ frenetic run better Spellman’s spike of a James Bolden shot on one end and thunderous put-back dunk on the other.

“I just saw [Bolden] put his head down,” Spellman explained after the game. “I just saw the opportunity for the block. I came over and got the rebound and tried to outlet it, and I saw Phil going to the hoop, and I was just thinking to myself, if he misses this, I got to get it.”

Get to it he did.

During a stretch like the one Villanova put together in the second half Friday against a famously physical West Virginia team, West Virginia can seem to operate on a different plane. The defense moves in sync, the fast breaks feel coordinated, the spot-up shooters know exactly where to stand. When it all clicks, as it did Friday during that second-half run, the Wildcats look something close to unstoppable.

“We were very together at that point. We felt connected,” guard Phil Booth explained in the locker room after the win. “All five guys were locked in, and we’re locked in with the bench and with coach. We trust one another.”

It’s easy to forget now, as Villanova basks in its victory and prepare for its regional final game Sunday against Purdue or Texas Tech, but the Wildcats looked to be in genuine trouble for a few minutes Friday. After leading by five early in the second half, Villanova had watched the Mountaineers exert their physicality during an 18-7 run, as the West Virginia faithful made Boston sound like Morgantown. When Konate rejected a Bridges fast-break dunk attempt and swaggered his way back down the floor, more than a few Wildcats fans surely thought about what had happened to so many of the tournament’s other top teams and wondered whether their squad would be the next to fall.

As it turned out, they had little reason to fear. In their first serious test of March Madness so far, Villanova responded like the veteran team it is. Brunson wound up with a game-high 27 points, but it was his poise and decision-making that truly spurred the Wildcats’ win.

“He gets us going by his actions,” back-up point guard Donte DiVincenzo said of Brunson. “He’s never one to go off and do his own thing, even though he can. He could go off an shoot crazy shots, but he doesn’t. He makes his team better, and that’s why we’re in this position.

And so Villanova lives to see another game, and the rest of the NCAA Tournament field takes note of what the Wildcats can do when they’re on. In a tournament as wild as this one, in which an 11 seed and two 9 seeds have already punched tickets to the Elite Eight, Villanova’s spurt Friday was reassuring. The world still has order, and March Madness still has a favorite.