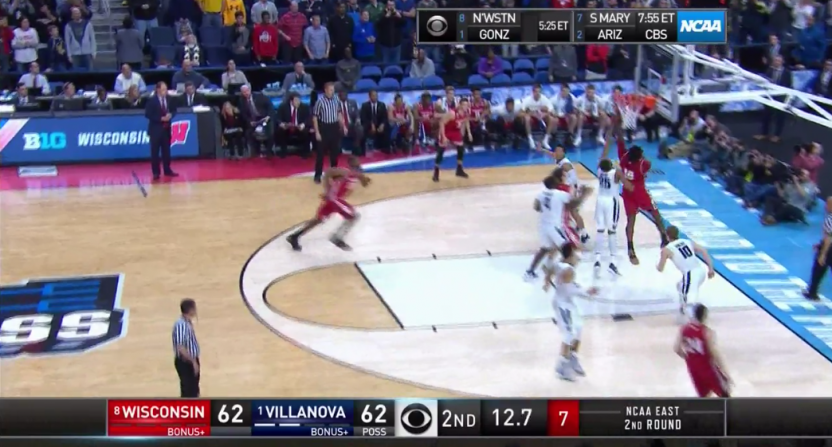 The defending NCAA Tournament champions will not repeat this year, as No. 8 Wisconsin knocked off No. 1 Villanova 65-62 in the second round of East region action on Saturday in Buffalo.

It was a back-and-forth, thrilling game throughout. And with the game tied 62-62, Badgers senior Nigel Hayes made this pretty baseline layup with 11.4 seconds left to serve as the game-winner:

(After the game, Hayes talked about being influenced by Michael Jordan’s fake spin move)

On the ensuing play, Villanova star guard Josh Hart tried to go up for a game-tying layup in the paint, but was denied with a great defensive effort from Wisconsin bigs Ethan Happ and Vitto Brown:

Brown was then fouled and made one of two free throws, but the Wildcats were unable to get a shot off, securing the Wisconsin upset victory:

Now, this upset certainly wasn’t as stunning as most 8-1 upsets, as Wisconsin (27-9) probably shouldn’t have been seeded as low as an eight-seed. And this is now — incredibly — the Badgers’ fourth consecutive Sweet Sixteen appearance.

Wisconsin: Second in B10, B10 Tournament finalist, beat Minnesota twice, and Badgers were an 8-seed and Gophers a 5-seed?

Wisconsin has made each of the last 4 Sweet 16s, the only team that can make that claim. pic.twitter.com/I1PKVnKaOp

17 tournament wins now for the #Wisconsin seniors, far and away the most in the entire tournament. Talent, experience, coaching. Impressive.

Why, it's almost as if Wisconsin isn't really an 8-seed

Two of the past three tournaments, Wisconsin has eliminated the overall No. 1 seed.

The NCAA Tournament is about matchups. Wisconsin — much like Butler — was a bad matchup for Villanova. There will be no repeat in 2017.

Wisconsin has won 3 of its last 4 games against the AP No. 1 team.

And then there were 9. With Villanova's loss there's just 9 perfect brackets remaining of the over 18 million in ESPN's Tournament Challenge

My bracket, in four acts pic.twitter.com/84QmIH6oXd

Everyone who had Villanova winning it all… #MarchMadness pic.twitter.com/mdxIzuz9r8

You either die a hero, or you live long enough to see yourself become the Villanova.