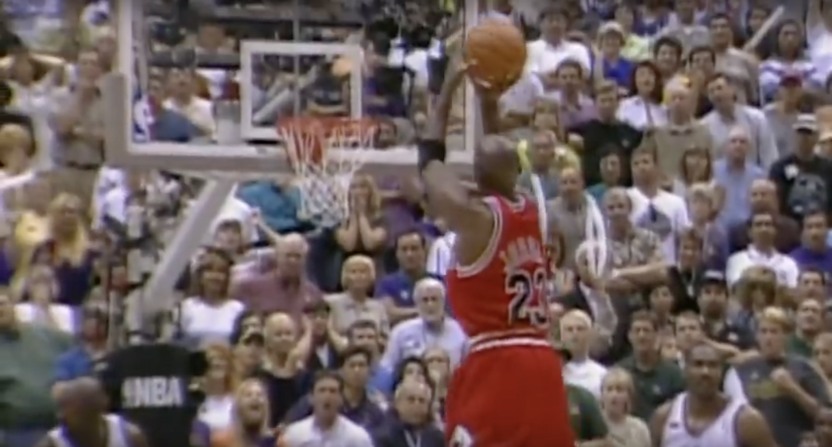 We live in weird times. Almost all sports are canceled for the indefinite future, the first time in modern history that we, as a society, won’t have sports to watch every day. It is far from the most important thing in the grand scheme of things, but we’ve lost an ever-present institution. For many, sports is supposed to be the escape.

What now? This is a sports website and I am a sports writer, so let’s keep talking about sports. Sports networks have to do something while we undergo this delay. I vote they show classic games, introducing younger fans to the best of the past. We can also relive some more recent great moments and games.

Let’s take a look at some of what networks should consider showing:

It feels especially brutal that the NCAA Tournament is canceled. We lose weeks of packed basketball days. The joy of watching a billion early-tournament games at once on a weekday afternoon, and following your numerous brackets, cannot be replaced.

A couple of networks (depending on if they have the rights) should combine and show games from a past tournament at the same time that this year’s games would have been played. Go back to a year that isn’t fresh in (most) fans’ memories but is still similar to today. Choosing a year at random: 2009, the year that Wayne Ellington, Tyler Hansbrough and Ty Lawson led North Carolina to a national championship.

Plenty of current or past NBA players featured prominently that year. Evan Turner was Ohio State’s best player (though they lost as an eighth-seed to Siena in the first round). Draymond Green was coming off the bench for runner-up Michigan State. Kemba Walker was a freshman force for UConn, a couple years before he scorched everyone. Blake Griffin’s Oklahoma made the Elite Eight.

The NCAA should use the March Madness app and put all the games on there so we can watch multiple games at once at 1:00pm ET on Thursday. In addition, we should get some great games from college basketball’s history. I’d like to see some John Wooden-Kareem Abdul-Jabbar UCLA games. Give us Florida Gulf Coast’s run, and of course UMBC’s upset of Virginia. There are plenty of classic players to educate the younger population (of which I am a part). Michael Jordan, Ralph Sampson, Patrick Ewing, even Christian Laettner — plenty to choose from.

For those that are not old enough to have watched him, Wayne Gretzky is something like a mythical figure. He’s the guy with all the records, the video game statistics that loom over today’s stars.

The game was very different when Gretzky was playing. It was more open, and goalies were swiss cheese. Players had more time on the puck because the pace of play was slower than it is today. In that environment, Gretzky was one of the most dominant athletes in sports history. The ‘87 Finals were competitive (Edmonton won in seven against the Flyers) and Gretzky, at 26, was in his prime. He scored 11 points (2g, 9a) in those seven games, leading both teams. We should get a chance to see him in action.

I don’t have a specific game or series because there are so many to choose from. There are plenty of playoff battles that have been overlooked over the years — the matchups with the Pistons in Michael Jordan’s earlier years, the comeback from 2-0 down in the conference finals against the Knicks in 1993, the seven-game series with Reggie Miller’s Pacers in 1998.

And, of course, there are the Finals. The Flu Game might be particularly relevant right now. Jordan’s last game as a Bull, when he scored 45 and hit the game-winner to beat the Jazz, would be fun to revisit. Watching some actual Jordan might improve Jordan vs. LeBron discourse.

Argentina at the 1986 World Cup

Part of my goal for these classic games is to showcase the greatest players from the past. If we can’t watch the great players of today, we might as well have some fun with history lessons. Diego Maradona, in a lot of (on-field) ways the precursor to Lionel Messi, would be another great player to look at.

Maradona led Argentina to its second and last World Cup title in 1986, scoring five goals in the tournament. He scored two each in the quarterfinal and semifinal, games that Argentina won 2-1 (against England) and 2-0 (against Belgium). They also won 3-2 in the final against West Germany, with Maradona assisting on an 84th-minute winner.

LeBron bringing a title to Cleveland was one of the most iconic moments in recent sports history. It would be cool to go back to that season, the peak of the LeBron-Kyrie Irving-Kevin Love big three. They swept their first two playoff series (against Detroit and Atlanta) and then bested the Raptors in six in the Conference Finals.

The 3-1 Finals comeback against the Golden State Warriors has to be played back soon on some sports network. It was an iconic battle between an incredible basketball-changing 73-win juggernaut and the greatest player of all time, won by the GOAT. Game 6, when LeBron and Kyrie both scored 41 points, would be a fun one to revisit, as would, of course, the thrilling Game 7. ESPN, make it happen!