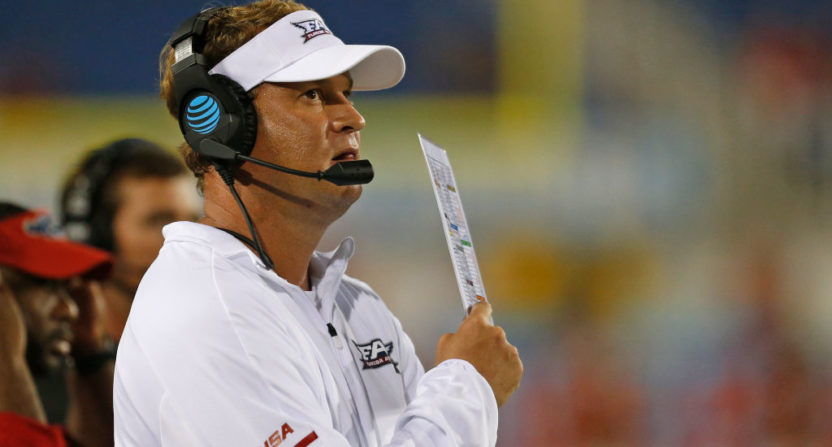 The college football season is almost here. You know about the Power Five schools. But what about the Group of Five? Here are five coaches who could emerge as hot candidates at bigger programs.

Kiffin has a reputation of being arrogant, immature, disloyal, and unlikeable. He has pissed off legendary football minds like Nick Saban and the late Al Davis. However, college football is a business. The bottom line is that Kiffin, baggage and all, knows how to recruit and is a bright offensive mind. If he has another strong season at FAU, some major conference athletic director is going to give him a chance.

The Owls are the overwhelming favorite to win Conference USA. They will begin this season with the nation’s second-longest winning streak and return 15 starters, including the league’s preseason offensive player of the year in Devin Singletary (1,920 yards and a nation-leading and C-USA-record 33 touchdowns (32 rushing)).

There’s a small chance FAU could be this year’s Central Florida of last season. They have a tough opener – at Oklahoma – on Sept.1 and travel to Central Florida on Sept. 21. But if they run the table, they could have a legit argument for College Football Playoff spot. Even if that doesn’t happen, Kiffin should be one of the most sought after names this winter.

It’s kind of hard to believe Satterfield is still at Appalachian State. He was mentioned as a candidate for the Ole Miss and Mississippi State jobs. He took over his alma mater in 2013 and successfully guided the Mountaineers through the transition from the FCS to the FBS.

Over the past three seasons, Satterfield has been as good as any mid-major coach: 30-9 with three bowl victories. He has won a share of the Sun Belt Conference in back-to-back seasons and has finished 7-1 in the league three straight years.

This the first season the Sun Belt will be split into divisions and there will be a championship game to determine the overall winner. Appalachian State is picked to win the East. The Mountaineers have seven all-conference players, led by defensive back Clifton Duck. If Satterfield improves to 4-0 in bowl games, it’ll be hard to image him staying another season. However, he is a North Carolina native. He also spent most of his assistant coaching career at Appalachian State. He started as a wide receiver coach in 1998 and has been there other than in 2009 (Toledo QB coach) and 2010-11 (FIU offensive coordinator).

Of all the guys on this list, Norvell might be the best bet to be coaching at a Power Five school next season. He’s young and he’s kept the momentum going at Memphis since Justin Fuente left after the 2015 season. In two seasons, Norvell is 18-8 with two bowl appearances. Norvell was rumored to be in the running for the Florida, Arkansas, and Mississippi State jobs. In December, he signed a contract extension worth $2.6 million per season, making him the highest-paid Group of Five coach in the country. The deal runs through 2022, but of course, that means nothing when big-pocketed schools come calling.

Memphis is picked to win the East Division of the American Athletic Conference. The Tigers figure to battle Central Florida for the championship. They return 16 starters from last year’s team which won the West and was ranked No. 25 in the final Associated Press poll. Running back Darrell Henderson and all-purpose threat Tony Pollard (an FBS-best 4 kickoff returns for scores) are expected to lead the way.

Norvell is clearly someone who’s going to be pursued heavily. His name will be attached to every SEC job (LSU? Missouri? Auburn?) that becomes available.

It seems like just a matter of time before Harsin leaves, much like his predecessors. The past four Boise State coaches have left for Power Five jobs: Houston Nutt (Arkansas), Dirk Koetter (Arizona State), Dan Hawkins (Colorado), and Chris Petersen (Washington). Harsin worked under Hawkins and Petersen. He returned to his alma mater in 2014 when Petersen left and experienced high expectations. Petersen went 92-12 and had the Broncos ranked in the final polls in six of his eight seasons. There had been some grumblings from the fan base about Harsin (42-12) but Boise State went 11-3 last year, winning the Mountain West title and a bowl game victory over Oregon. It was ranked No.22 in the final A.P. poll.

Boise State, picked to win the Mountain Division, returns 18 starters and is ranked No.22 in the preseason coaches poll. The Broncos have eight all conference selections, led by senior quarterback Brett Rypien, the preseason conference Offensive Player of the Year.

Harsin had led his team to a bowl game every season of his coaching career (once at Arkansas State and four times as Boise State). He would appear to be an ideal candidate for a Pac 12 job.

The former Toledo assistant was promoted when Matt Campbell took over Iowa State in 2016. Campbell is working miracles at Ames, Iowa. Is Candle the star on the rise? He guided the Rockets to a bowl victory over Temple in his debut. He’s made three bowl trips and Toledo won the MAC championship last year for the first time since 2004.

Toledo is picked to finish second in the MAC’s West Division behind North Illinois. The Rockets have 14 starters back with the best wide receiver group in the league: Diontae Johnson, Jon’Vea Johnson, and Cody Thompson.

The Big Ten often looks at the MAC to fill vacancies. Minnesota’s second-year coach P. J. Fleck was previously at Western Michigan. Candle might be a good option for a school like Illinois if it jettisons Lovie Smith.