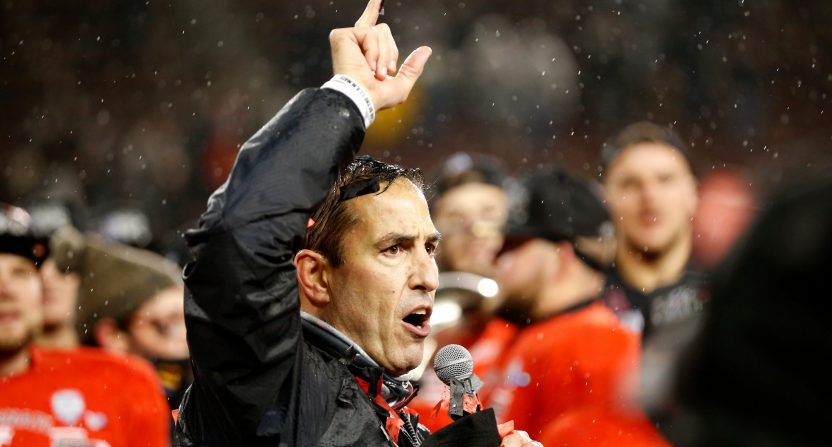 Are you dissatisfied with your current Power 5 college football team? Here are five coaches from the Group of Five/independent schools who could make the jump to bigger programs.

Bill Clark has been a name to watch for a while now. It’s somewhat surprising that he’s still at the same job. He has consistently done great work at UAB, a program that came back from the dead. Since that two-year hiatus, the Blazers have gone 34-16 with four straight bowl trips and Conference USA titles twice in three years. Clark was reportedly in the mix for the Auburn job. Instead, he’s back again where his team is expected to compete for another CUSA title.

Last season, he navigated a schedule that saw five games canceled due to COVID, including the Gasparilla Bowl against South Carolina. The Blazers lost at Miami 31-14, and they had close losses against Louisiana (24-20) and Louisiana Tech (37-34 in double overtime). This season, UAB will have two marque non-conference games: a visit to Georgia and a home game against Liberty. With nine starters back on defense, including safety Kristopher Moll, the Blazers should be tough again. They were seventh in the nation in total defense last year, allowing 311.1 yards per game.

The biggest shocker of 2020 was Coastal Carolina. A school best known for its baseball program (winning the 2016 College World Series) became a national sensation in football. The Chanticleers, picked to finish last in the Sun Belt, enjoyed their most successful season as an FBS member. They went 11-1 with their sole loss coming in the Cure Bowl to Liberty. They finished No. 14 in the final AP poll and Chadwell was named the 2020 AP College Coach of the Year.

Chadwell was a name unfamiliar to most. He worked in Division II and the FCS before landing at Coastal Carolina in 2017 initially as the offensive coordinator. He was unexpectedly promoted to interim head coach when Joe Moglia missed that season due to a medical leave. When Moglia returned the following season, Chadwell went back to his original job. But Moglia stepped down after 2018, leading to Chadwell’s permanent promotion.

Can the Chanticleers follow it up?  Interestingly, they might not even win their own division. In the preseason Sun Belt poll, they were picked tied for first along with Appalachian State. But they have 11 Preseason All-Sun Belt selections, highlighted by sophomore quarterback Grayson McCall.

Admit it. We all laughed when Liberty hired Freeze. We laughed even harder when he coached from a hospital bed. Truly bizarre. Looks like he might get the last laugh. Despite seeming like an NCAA violation waiting to happen, Freeze has been a massive success for Liberty’s fledgling FBS program. In his two seasons, he guided the Flames to back-to-back bowl games victories, including a 10-1 record last year. They finished ranked No. 17 in the final AP poll.

Of course, we never questioned Freeze’s acumen. We have questioned his apparent disregard for rules. He resigned from Ole Miss in July 2017 after the discovery of calls connected to escort services. A university investigation revealed “a pattern of personal misconduct,” and he was later hit with a one-year show cause penalty. The circumstances behind his ouster made his hiring at Liberty, a conservative Christian institution, all the more unusual. But as long as he wins and stays out of trouble, he could find his way back to a Power 5 job. Liberty is expected to have another great season, behind quarterback Malik Willis, who looks a future first-round NFL draft pick.

If you’re an SEC school, you’re keeping a close eye on Billy Napier. He has emerged as one of more intriguing candidates out there He reportedly interviewed for openings at Auburn and South Carolina last year, and Mississippi State and Baylor in 2020. It’s easy to see why. He has been an assistant for both Dabo Swinney at Clemson and Nick Saban at Alabama. That alone puts you on the radar.

After serving as Saban’s wide receivers coach from 2013-16, he spent one season at Arizona State as its offensive coordinator. He took over Louisiana in 2018, and the Ragin’ Cajuns have become one of the most feared mid-majors. They’re 21-4 over the past two seasons with two bowl victories. Last season, they finished 10-1 and ranked No. 15 in the AP poll. They got our attention immediately by winning 31-14 at No. 23 Iowa State to open the season. The only loss was to fellow Sun Belt power Coastal Carolina.

Ryan Day probably isn’t going anywhere. But if he were to suddenly leave Ohio State, the first call would be to Luke Fickell.

Fickell is the hottest coaching candidate out there for potential openings in college and the pros. He turned down Michigan State in February 2020, and his name was connected to the Philadelphia Eagles job last winter. Fickell is one of the highest-paid Group of Five coaches in the nation.

He spent one season as the interim coach in 2011 at Ohio State when Jim Tressel resigned amid NCAA violations from a tattoo scandal. After not getting the permanent gig, Fickell stayed on as a defensive coordinator under Urban Meyer for five years. In 2017, he left for Cincinnati and has built the Bearcats into a nationally relevant team. They finished 9-1 and No. 8 in the final AP poll last season. This year, they’re the runaway favorites to win the AAC. Cincinnati returns key defensive players cornerback Ahmad “Sauce” Gardner and defensive lineman Myjai Sanders from a unit that was eighth in scoring defense last season (16.8 points per game).

Cincinnati has a chance to impress with back-to-back non-conference games at Indiana and Notre Dame.